May the angels lead you into Paradise...

Text of the homily of Archbishop Timothy Dolan, Archbishop of New York and President of the United States Conference of Catholic Bishops Funeral of His Eminence John Cardinal Foley Cathedral Basilica of Sts. Peter and Paul Philadelphia, December 16, 2011

"And the Word was made flesh, and dwelt among us!" It is the celebration of that mystery of the Incarnation that we await this Advent season, as we long to hear those inspired poetic lines from the Prologue of the Gospel of John the Evangelist on Christmas morning. It is the mystery of the ongoing Incarnation, especially manifest in the life and ministry of John Patrick Foley, that unites us in grateful, reverent, supplicant prayer this Advent afternoon. Early last Sunday morning, I had just begun the Office of Readings from the Liturgy of the Hours for the Third Sunday of Advent, Gaudete Sunday, when I took a call from Cardinal Justin Rigali, who, with characteristic thoughtfulness, telephoned to tell me of the passing of Cardinal John Patrick Foley. 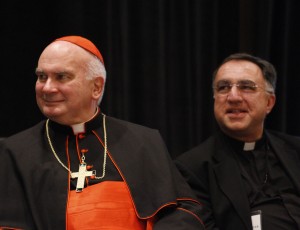 Cardinal Foley and Fr. Rosica at International Catholic Media Convention, Toronto, May 2008.
When I then returned to my breviary, it was this line from St. Augustine, the second lesson for that day's office, that greeted me: "John is the voice, but the Lord is the Word who was in the beginning. John is the voice that lasts but for a time; from the beginning Christ is the Word who lives forever." What do you say we pay our friend Cardinal Foley one final tribute and concentrate right now, as he would plead for us to do, not upon him, but upon the Eternal Word, the Word made flesh, the Way, the Truth, and the Life, our Lord and Savior Jesus Christ, the Incarnate Word. Because, love for Jesus and His Church was indeed the passion of John Patrick Foley's life, the only dictionary required to translate the meaning of the life and ministry of this remarkably lovable, simple, humble, wise, holy man. It was into the dying and rising of Jesus that John Foley was baptized, as St. Paul teaches us in today's Liturgy of the Word; It was with the body and blood of Jesus in the Eucharist that John Foley was daily nourished; It was on the lap of the bride of Christ, Holy Mother Church, so alive in the vibrant and coherent Catholic culture of this great archdiocese he so cherished, that John Foley was raised, formed, and educated; It was into the priesthood of Jesus Christ that John Foley was ordained, assuming, not only in soul but in his very person, reconfigurment to Jesus Christ the Head and Shepherd of the Church; It was as a successor to the apostles, the intimate friends of this Jesus, that he was consecrated as a bishop; It was to the service of the Church universal, the Mystical Body of Christ, under the pastorate of the successor of St. Peter, that John Patrick Foley served most famously the last twenty-seven years; And it is now to the tender and unfailing mercy of this Jesus that, with immense love and gratitude, we commend this loyal son of the Church. 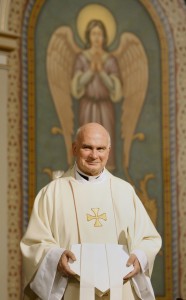 Cardinal Foley celebrating mass in Toronto's St. Paul's Basilica during International Catholic Media Convention, May 2008.
Yes, love for Jesus and His Church was indeed the passion of his life. The Eternal Word was incarnate in Jesus Christ; "The Word became flesh and dwelt among us." That mystery of the Incarnation continues in and through the Church. But John Foley, ever the philosopher and debater, would remind us of the last part of this syllogism: each of us is also called to continue the mystery of the Incarnation through His Church in our own lives. As God asked the Virgin of Nazareth, to whom Cardinal Foley had such filial devotion, at the Annunciation, so does God still ask each of us: "Will you give my Son flesh? Will you supply the Eternal Word with a human nature? Will you allow the Incarnation to go on?" We genuflect at the reply of Mary: "Behold the handmaid of the Lord! Be it done unto me according to Thy Word!" And this afternoon we praise God's grace and mercy for the humble, obedient reply of John Foley: a yes for seventy-six years; a yes to what he described as "God's whisper" to him to become a priest; a yes to God's plan in recent years that entailed the splinters of the cross as he gradually bowed to leukemia. Cardinal Foley, effective pedagogue that he was, would remind us of the scholastic maxim that grace builds on nature. And what an appealing nature John Foley provided to God so the Incarnation might continue! A courtesy that was so impeccable and the thoughtfulness that was so unfailing that we might not be surprised to find his photograph in the "pictionary" for the entry on "gentleman." A natural sense of humor that was so spontaneous that I once told him, "John, if I did not know for a fact that you were a teetotaler, I'd swear you had a couple shots under your filattata before breakfast every morning!" A holiness in "His Foleyness" that was evident without being overbearing; A depth to his intellect which could express itself with warmth and childlikeness; A sparkle in his eye, smile on his lips, lilt to his laugh... and one too many puns! All a nature upon which God's grace built, and which God's Word assumed, to keep the mystery of the Incarnation going. Priests and people of this noble Archdiocese of Philadelphia, this only child of John and Regina Foley considered you his family; never did he stop bragging about this Archdiocese of Philadelphia, (as much as we begged him to!); to you go our condolences for this "death in the family;" hold your heads high! A local Church that can give us the likes of such a noble, gentle man, whose "message went out to all the world," is a Church which can endure and come out even stronger in the face of woe and tears. The "Vatican's Voice of Christmas" may now be silent; but the Incarnation that made radiant the darkness of that night called silent will never go still, because the example of friends such as John Patrick Foley inspires us to emulate him and his Regina, Mary, in providing God a human nature. "John is the voice, but the Lord is the Word who was in the beginning. John is the voice that lasts but for a time; from the beginning Christ is the Word who lives forever."