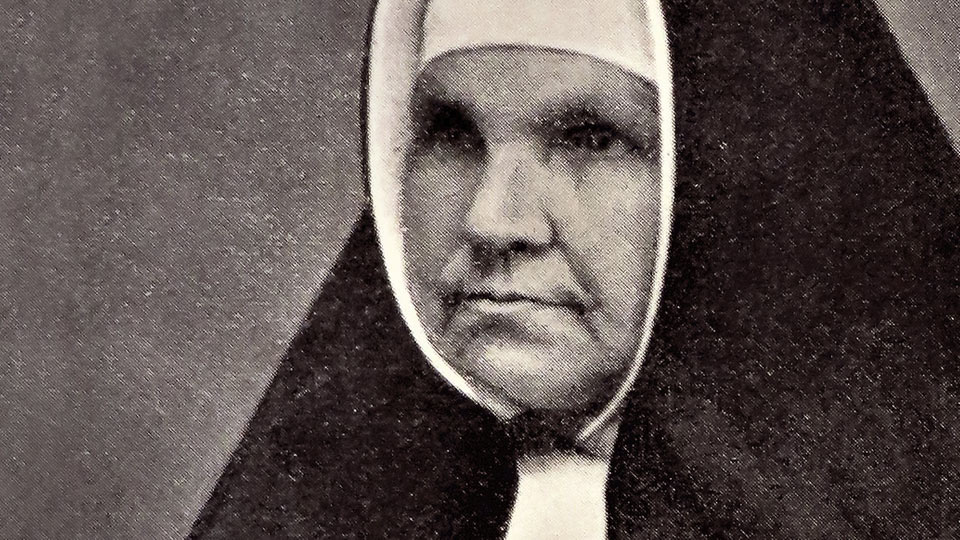 Born in Dernbach, Germany, Katharina Kasper was a sickly child and missed school often. Reading, however, was her favourite pastime, and she especially liked the Bible and The Imitation of Christ by Thomas à Kempis. An outgoing girl with a strong moral character, she often travelled to a nearby Marian shrine with her mother and would take other children there, telling them stories about God and Mary. It was during these early years that her religious vocation manifested itself, and she felt a great desire to consecrate herself to the Lord. Already as a child Katharina was sensitive to the needs of those around her, an attribute that led to a life of service and hard work. As a young woman she began to help the poor, sick, and abandoned. Then when her father died, she began working as a farm hand, selling her weaving, and splitting stones for road construction to support herself and her mother who was not in good health.

Her hard work and ordinary acts of charity attracted others in the village, and with the encouragement of her spiritual director, Katharina and four other women formed a religious community: the Poor Handmaids of Jesus Christ. While she would have preferred joining an established order, there were no female religious congregations in her area to join, so she had to start her own. These “Dernbach Sisters” pronounced public vows of poverty, chastity, and obedience on August 15, 1851, to Bishop Peter Joseph Blum of Limburg, and began ministering to those most in need. Katharina took the name “Maria” and, serving for five consecutive terms as superior of the order, was known in religious life as “Mother Maria.” Pope Pius IX granted the decree of praise for the order on March 9, 1860, and the order received formal papal approval from Pope Leo XIII on May 21, 1890. Led by Mother Maria, the Poor Handmaids of Jesus Christ (ADJC) set about their work with the poor, the sick, and children. Although that is where they started, they are often recognized more by the love and simplicity with which they serve than by any particular ministry. Maria Katharina suffered a heart attack on January 27, 1898, and died in the congregation’s Dernbach Motherhouse at dawn on the Feast of the Presentation. She was beatified on April 16, 1978, by Pope Paul VI in Saint Peter’s Square, being praised by the Holy Father as a woman of “faith and fortitude.” Throughout her life, Maria Katharina tried with all her strength to recognize what God’s will was in every situation she encountered, and that spirit has been passed on to the Sisters of her congregation. Through this openness to others and to God, the order has extended the love and vision of Mother Maria far beyond the boundaries of Germany, as their ministry continued to grow and spread to countries like England, the United States, the Netherlands, India, Mexico, Brazil, Kenya, and Nigeria.