Lessons to be learned from the American health care debate

The recent days in the American journey towards health care reform have been revealing. With the final vote rumored to take place over the weekend, before President Obama leaves for Indonesia, many religious groups are publicly staking out their territory, some of them thrusting their flags in surprising ground. 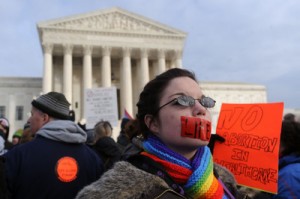 One such group was the Leadership Conference of Women Religious (LCWR). In a March 17th letter addressed to all of the members of U.S. Congress, the LCWR wrote that they will be casting “a life-affirming 'yes' vote" on the Senate's version of health reform legislation. The letter claimed to represent 59,000 religious in the United States, but the math was recently criticized by the American bishops' director of communications, Sister Mary Ann Walsh, for being way off the mark. “The letter had 55 signatories, some individuals, some groups of three to five persons.  One endorser signed twice. There are 793 religious communities in the United States. The math is clear,” Sr. Mary Ann wrote. "Despite false claims to the contrary, the Senate bill will not provide taxpayer funding for elective abortions," the letter said. “It will uphold long-standing conscience protections and it will make historic new investments -- $250 million -- in support of pregnant women." To add to this sudden “get-it-over-with” outburst, the Catholic Health Association has also thrown its support behind the current Senate health care reform bill saying that changes to the abortion-inclusive language can be made after the bill’s passing. But this isn’t what the United States Conference of Catholic Bishops is saying. In their March 15th statement, the USCCB says that though it has “long and consistently advocated for the reform of the American health care system”, the USCCB holds that the Senate bill’s flaws "are so fundamental that they vitiate the good that the bill intends to promote.” “Health care reform should provide access to affordable and quality health care for all, and not advance a pro-abortion agenda in our country,” said the USCCB in country-wide bulletin insert last week. “Genuine health care reform is being blocked by those who insist on reversing widely supported policies against federal funding of abortion and plans which include abortion, not by those working simply to preserve these longstanding protections.” In a statement on the Archdiocese of Denver website, Archbishop Charles Chaput bemoans the confusion that has arisen from certain Catholic groups that have chosen to “undermine the leadership of the nation’s Catholic bishops”. As a result of their decision, he said, they are doing “a grave disservice to the Church” and are “misleading faithful Catholics and legislators” through their support of the Senate bill. “Do not be fooled.  Nothing has changed,” the Archbishop writes. “The Senate bill remains gravely flawed on the issues of abortion funding, conscience protections and the inclusion of immigrants. Unless seriously revised to address these issues, the Senate version of health care is unethical and should be firmly opposed.” On March 17th, Mother Mary Quentin Sheridan, president of the Council of Major Superiors of Women Religious (CMSWR), released a statement affirming her Council’s solidarity with the stance of the USCCB on the upcoming health care reform vote. The Council, who in their statement refer to themselves as the second conference of Major Superiors of Women Religious in the United States, affirms that the “bishops’ position is the authentic teaching of the Catholic Church” and that “protection of life and freedom of conscience are central to morally responsible judgment”. “We join the bishops in seeking ethically sound legislation,” the statement said. As you can see, there is no shortage of boldness on the part of the American bishops, who are at the helm of what is one of the most heated moral debates in American history. Let us continue to pray for the American people and to keep in mind that because we are all members of the Body of Christ, we Canadians must actively share in our neighbor’s desire for peace and mutual understanding. May we never settle for half truths in the pursuit of “liberty and justice for all”, particularly for our unborn brothers and sisters. After all, Canada also finds itself in the “life issues limelight” as the hosting country for upcoming G-8 summit. Canada’s recent decision to focus on international maternal and children’s health does not make room for international access to abortion or contraception. Some would have it otherwise, as there is currently a push for the focus to shift towards “reproductive health care” (contraception, abortion) instead of on the nutrition and general health (vaccinations, surgeries) of mothers and their babies around the world. As Catholics, we have no shortage of chances to make a stand for life in the coming days. We are being given unique opportunities to love those whom we have never met. Let us be a generation that is remembered for its love. - Photo: CNS/Peter Lockley