Jesus' loving gaze rekindles the embers of our desire for God: Pope Francis' Homily for the Feast of St. Matthew the Evangelist 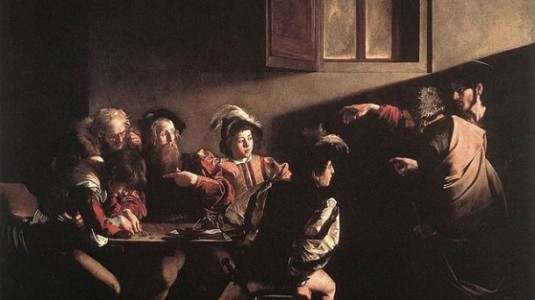 Fr. Rosica's introduction: Allowing ourselves to be looked upon by Jesus, whose gaze changes our lives: this was the focus of Pope Francis' remarks after the readings at Mass on Saturday morning, the Feast of St Matthew, Apostle and Evangelist, whose conversion story is told in the Gospel passage of the day, a Gospel story that has great significance for the Holy Father.  Pope Francis' gestures and simple words flow from his episcopal and now papal motto: miserando et eligendo.  Jesus' gaze of merciful tenderness (miserando), shows this patience of God which, according to an ancient insight expressed in our day is his response to human weakness. Taken from St. Bede's commentary on the call of Matthew, these words express Jesus' whole approach to people having mercy on others and inviting them (eligendo) to follow him.  These are the bare essentials of the Christian faith.
POPE FRANCIS' HOMILY DURING MASS
Jesus looks Matthew a tax collector, a public sinner whose whole life was money, which he idolized right in the eye. Then, said Pope Francis, Matthew feels in his heart the gaze of the Lord who looked upon him.
That gaze overtook him completely, it changed his life. We say he was converted. He Changed his life. As soon as he felt that gaze in his heart, he got up and followed him. This is true: Jesus' gaze always lifts us up. It is a look that always lifts us up, and never leaves you in your place, never lets us down, never humiliates. It invites you to get up - a look that brings you to grow, to move forward, that encourages you, because the One who looks upon you loves you. The gaze makes you feel that He loves you. This gives the courage to follow Him: And he got up and followed him.
The gaze of Jesus, said Pope Francis, is not something magical: Jesus was not a specialist in hypnosis. Jesus looked on everyone, and everyone felt His gaze upon him, as if Jesus had called each person by name  and this look would change the lives of everyone. So did Peter change, who, after denying his Lord then met His gaze and wept bitterly. Then there is the final gaze, from the Cross. He looked on His mother, looked at the beloved disciple and said, with that look, he told us that His mother was our mother and that the Church is mother - with a look. Then he looked at the Good Thief, and once again to Peter, who was afraid, after the Resurrection, with those three questions: Do you love me? - a look that shamed him. The Pope said it will do us well to think and pray about this gaze of Jesus, and to let ourselves be looked on by Him. Jesus goes to the house of Matthew as he was sitting at the table many sinners arrive. Word had spread, and all of society - but not the respectable folks - felt invited to lunch, as it happened in the parable of the king who ordered the servants to go to the main crossroads to invite to his son's wedding as many people as they met, both good and bad:
And sinners, tax collectors and sinners, they felt that Jesus had looked on them and that gaze of Jesus upon them -I believe - was like a breath on embers, and they felt that there was fire in the belly, again, and that Jesus made lifted them up, gave them back their dignity. The gaze of Jesus always makes us worthy, gives us dignity. It is a generous look. But behold, what a teacher: dining with the dregs of the city!: But beneath that dirt there were the embers of desire for God, the embers of God's image that wanted someone who could help them be kindled anew. This is what the gaze of Jesus does.
All of us, in our lives, concluded Pope Francis, have felt this gaze, and not once only: many times! Perhaps the person of a priest, who taught us doctrine or forgave our sins, perhaps in the help of friends.
But all of us find ourselves before that gaze, that marvelous gaze, and we go forward in life, in the certainty that He looks upon us. He too, however, awaits us, in order to look on us definitively and that final gaze of Jesus upon our lives will be forever, it will be eternal. I ask all the saints upon whom Jesus has looked, to prepare us to let ourselves be looked upon in life, and that they prepare us also for that final and first! gaze of Jesus!