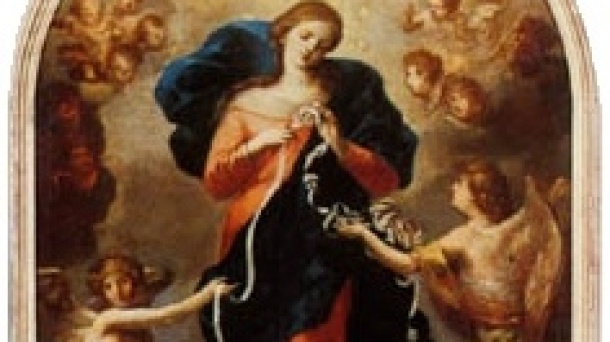 The month of May is traditionally the month of Mary in the Catholic Church. To celebrate this month we’ll be bringing you a series of posts about obscure Marian devotions. The first devotion we’ll be examining is Our Lady Untier of Knots. The year is 1612, the place is Augsburg, Germany. A nobleman named Wolfgang Langenmantel goes to the University of Ingolstadt to see Jesuit Father Jakob Rem. Langenmantel’s marriage is splintering, divorce seems unavoidable. Not knowing how to save his marriage the nobleman turns to the Jesuit priest who is known in the region for his holiness and wisdom. Langenmantel visits the priest four times over 28 days. During each visit the two men spend some time praying and venerate the Blessed Mother. The fourth, and final time the nobleman goes to visit the priest he brings along his wedding ribbon. At the time, German weddings involved the maid of honor tying a white ribbon around the bride and grooms’ arms to visually symbolize their union. This is the ribbon Langenmantel brought to the monastery to offer to Mary. Fr. Rem took the ribbon, and held it up as a sign of offering it to Mary. At the same time he untied the knots that had formed in the ribbon. Legend has it the ribbon became a dazzling, intense white. Harmony returned to Langenmantel’s marriage. He and his wife Sophie stayed together. That episode, however, is not what gave origin to the devotion to Mary as the untier of knots. In 1700 Langenmantel’s grandson, a certain Fr. Heironymus Langenmantel was the canon of St. Peter’s am Petrach church. To commemorate the turn of the century he wanted to donate an altarpiece to the church on behalf of his family. The altar for which the piece would be used was already dedicated to the Blessed Virgin of Good Counsel, so the theme was set. He also wanted the piece to reflect his family’s history in some way. The story of his grandparent’s marriage being saved through Mary’s intercession was the most obvious choice. Fr. Langenmartel commissioned a painting by Johan Melchior Schmittedner based on the story of how his grandparent’s marriage was saved. The end result was a painting featuring Mary, represented as Our Lady of Good Counsel, holding a white ribbon in her hand. She seems to be untying knots in the ribbon. There are two angels on either side of her, one offering here the knotted ribbon, the other holding up the smooth, free flowing ribbon after Mary has worked out the knots. Below her feet is a serpent, and above her head is a halo of seven stars and a dove descending upon her. Underneath the figure of Mary crushing the serpent there are two small figures – Wolfgang Langenmantel and the archangel Raphael – walking hurriedly towards the monastery at Ingolstadt. That painting sparked interest in and devotion to Our Lady as the untier of knots, something St. Ireneus attributed to her in his writings when he said she untied the knots of sin. Devotion to Our Lady Untier of Knots was popular in Germany and, oddly enough, South America. One theory links the spread of the devotion in South America to then-Fr. Jorge Bergoglio. In 1986 Bergoglio went to Germany to finish his doctoral thesis. He came across the church of St. Peter’s am Petrach and the painting of Our Lady donated by Fr. Langenmantel in 1700. Bergoglio, who reportedly struck by the painting and the devotion. Some accounts say he bought a print to take home with him, others say he sent a postcard home with the image of the painting. In any case, he seems to have adopted the devotion, and through him Argentine Catholics came to know about this German devotion. --- During the Month of May we plan to bring you a look at some lesser known Marian devotions from around the world. photo: detail of Mary, Untier of Knots. Public Domain photo.