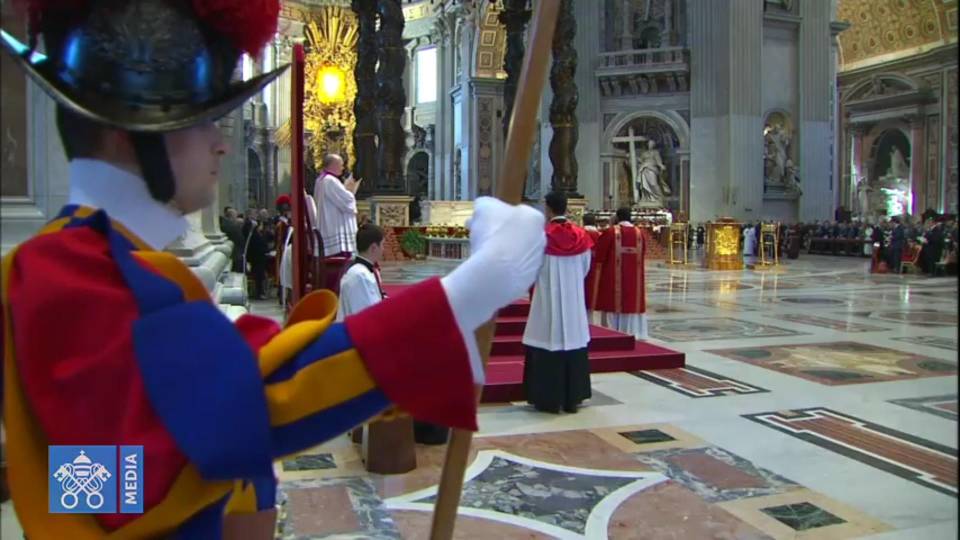 Celebration of the Lord's Passion in St. Peter's Basilica on April 19, 2019 (Courtesy of Vatican Media)

Today Pope Francis led the Celebration of the Lord's Passion in St. Peter's Basilica in the Vatican. The homily was given by Raniero Cantalamessa, O.F.M. Cap., Preacher to the Papal Household. Read below the words he offered on this solemn occasion:

“HE WAS DESPISED AND REJECTED BY MEN”

Good Friday Sermon 2019, St. Peter’s Basilica
He was despised and rejected by men; a man of sorrows, and acquainted with grief; and as one from whom men hide their faces he was despised, and we esteemed him not. (Is 53:3)
These are the prophetic words of Isaiah with which we begin the Liturgy of the Word today. The account of the passion that follows has given a name and a face to this mysterious man of sorrows who was despised and rejected by all men: the name and the face of Jesus of Nazareth. Today we want to contemplate the Crucified One specifically in his capacity as the prototype and representative of all the rejected, the disinherited, and the “discarded” of the earth, those from whom we turn aside our faces so as not to see them. Jesus did not begin to be that man just at his passion. Throughout his life he was part of this group. He is born in a stable “because there was no place for them in the inn” (Lk 2:7). In presenting him in the temple, his parents offer “two turtledoves or two young pigeons,” the offering proscribed by the law for the poor who could not offer a lamb (see Lev 12:8). That was a genuine proof of poverty in Israel of that time. During his public life, he has nowhere to lay his head (see Mt 8:20): he is homeless. Now we come to his passion. In the account there is a moment that we do not often focus on but that is extremely significant: Jesus in the praetorium of Pilate (see Mk 15:16-20). The soldiers had noticed a bramble bush in the adjacent open space; they gathered some thorny branches from it and pressed them into his head; to mock him they put a cloak on his shoulders that were still bloody from his scourging; his hands were bound with a rough rope; they placed a reed in his hands, an ironic symbol of his royalty. He is the prototype of handcuffed people, alone, at the mercy of soldiers and thugs who take out the rage and cruelty they stored up during their lives on the unfortunate poor. He was tortured! “Ecce homo!” “Here is the man!” exclaims Pilate in presenting him shortly after to the people (Jn 19:5). These are words which, after Christ, can be said of the endless host of men and women who are vilified, reduced to being objects, deprived of all human dignity. The author Primo Levi titled the account of his life in the extermination camp in Auschwitz If This Is a Man. On the cross Jesus of Nazareth becomes the symbol of this part of humanity that is “humiliated and insulted.” One would want to exclaim, “You who are rejected, spurned, pariahs of the whole earth: the greatest man in history was one of you! Whatever nation, race, or religion you belong to, you have the right to claim him as yours.” 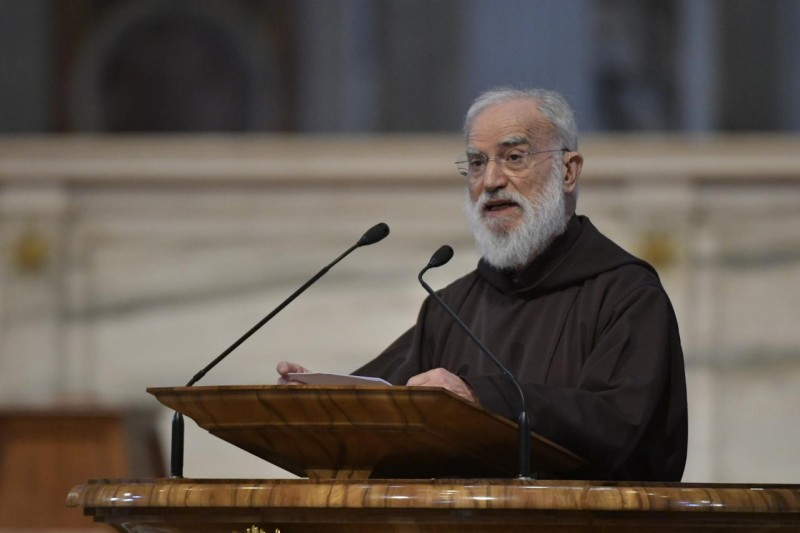 Fr. Raniero Cantalamessa delivers the homily during the Celebration of the Lord's Passion in St. Peter's Basilica on April 19, 2019 (Courtesy of Vatican Media)
The African-American writer and theologian Howard Thurman—the man Martin Luther King considered his teacher and his inspiration for the non-violent struggle for human rights—wrote a book called Jesus and the Disinherited.”1 In it he shows what the figure of Jesus represented for the slaves in the south, of whom he himself was a direct descendant. When the slaves were deprived of every right and completely abject, the words of the Gospel that the minister would repeat in their segregated worship —the only meeting they were allowed to have— would give the slaves back a sense of their dignity as children of God. The majority of Negro Spirituals that still move the world today arose in this context.2 At the time of public auction, slaves experienced the anguish of seeing wives separated from their husbands and children from their parents, being sold at times to different masters. It is easy to imagine the spirit with which they sang out in the sun or inside their huts, “Nobody knows the trouble I've seen. Nobody knows but Jesus.” 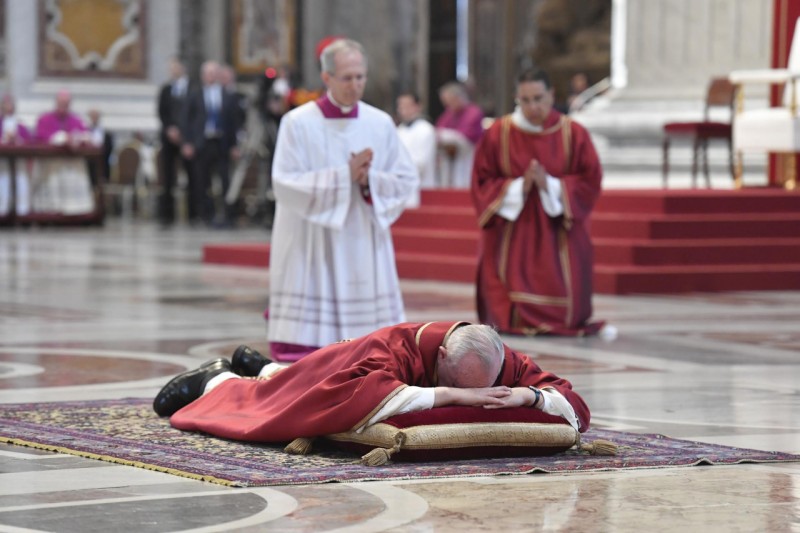 Celebration of the Lord's Passion in St. Peter's Basilica on April 19, 2019 (Courtesy of Vatican Media)
This is not the only meaning of the passion and death of Christ, and it is not even the most important. The most profound meaning is not social but spiritual and mystical. That death redeemed the world from sin; it brought the love of God to the farthest and darkest place in which humanity has been trapped in its flight from him, that is, death. This is not, as I said, the most important meaning of the cross, but it is the one that all people, believers and non-believers, can recognize and receive. I repeat, everyone, and not just believers. Through the event of the Incarnation of the Son of God he made himself man and united himself to all of humanity, but through the manner of his Incarnation he made himself one of the poor and rejected and embraced their cause. He took it upon himself to ensure that when he solemnly affirmed that whatever we did for the hungry, the naked, the incarcerated, the outcast, we did to him, and whatever we omitted doing for them, we omitted doing to him (see Mt 25:31-46). But we cannot stop here. If Jesus had only this to say to the disinherited of the world, he would only be one more among them, an example of dignity in the face of misfortune and nothing more. Then it would be a further proof against the God who allowed all of this. We know the indignant reaction of Ivan, the rebellious brother in The Brothers Karamazov by Dostoevsky, when Aloysha, the younger brother, mentions Jesus to him: “Ah, yes, the ‘only sinless One’ and his blood! No, I have not forgotten about him; on the contrary, I’ve been wondering all the while why you hadn’t brought him up for so long, because in discussions your people usually trot him out first thing.”3 The Gospel does not in fact stop here. It says something else: it says that the Crucified One is risen! In him a total reversal of roles has taken place: the vanquished has become the victor; the one judged has become the judge, “the stone which was rejected by the builders has become the cornerstone” (see Acts 4:11). The final word is not and never will be injustice and oppression. Jesus not only restored dignity to the disinherited of the world; he also gave them hope! In the first three centuries of the Church the celebration of Easter was not spread out over several days the way it is now: Good Friday, Holy Saturday, and Easter Sunday. Everything was concentrated in one day. Both the death and resurrection were commemorated at the Easter Vigil. To be more precise, neither the death nor the resurrection were commemorated as distinct and separate events; instead what was commemorated was the passage of Christ from one to the other, from death to life. The word “pascha” (pesach) means “passage”: the passage of the Jewish people from slavery to freedom, the passage of Christ from this world to the Father (see Jn 13:1), and the passage from sin to grace for those who believe in him. It is the feast of the reversal directed by God and accomplished in Christ; it is the beginning and the promise of the unique turnaround that is completely just and irreversible concerning humanity’s fate. We can say to the poor, the outcasts, those who are trapped in different forms of slavery still occurring in our society: Easter is your feast! 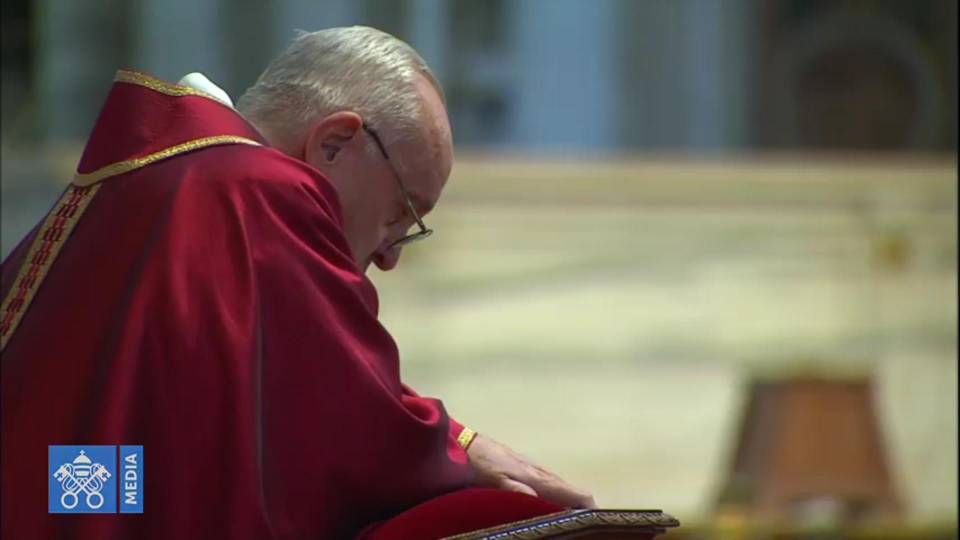 Celebration of the Lord's Passion in St. Peter's Basilica on April 19, 2019 (Courtesy of Vatican Media)
The cross also contains a message for those who are on the opposite side of this equation: the powerful, the strong, those who are comfortable in their role as “victors.” And it is a message, as always, of love and salvation, not of hate or vengeance. It reminds them that in the end they are bound to the same fate as everyone else: whether weak or strong, defenseless or tyrannical, all are subjected to the same laws and to the same human limitations. Death, like the sword of Damocles, hangs over everyone’s head by a thread. It warns against the worst evil for a human being, the illusion of omnipotence. We do not need to go back too far in time; it is enough to remember recent history to be aware of how frequent this danger is and how it leads individuals and nations to catastrophe. Scripture has words of eternal wisdom for those who dominate the world’s stage:
Learn, O judges of the ends of the earth. / . . . Mighty men will be mightily tested. (Wis 6:1, 6)
Man cannot abide in his pomp, / he is like the beasts that perish. (Ps 49:20)
For what does it profit a man if he gains the whole world and loses or forfeits himself? (Lk 9:25)
The Church has received the mandate from its founder to stand with the poor and the weak, to be the voice for those who have no voice, and, thanks be to God, that is what she does, especially in her Chief Shepherd. The second historical task that religions need to take on together today, besides promoting peace, is not to remain silent in the face of the situation that is there for everyone to see. A few privileged people possess more goods than they could ever consume, while for entire centuries countless masses of poor people have lived without having a piece of bread or a sip of water to give their children. No religion can remain indifferent to this because the God of all the religions is not indifferent to all of this. 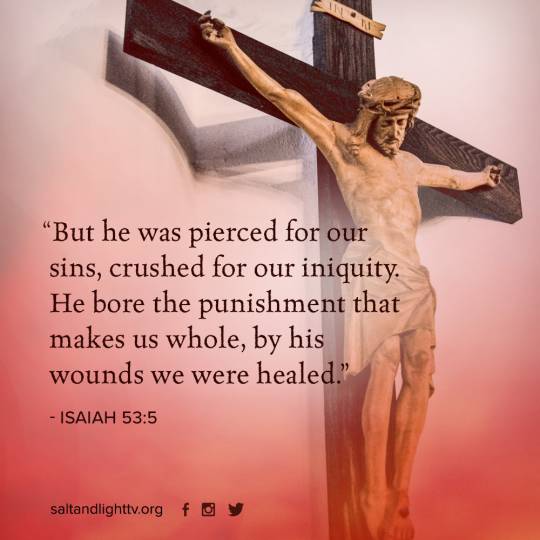 Let us return to the prophecy of Isaiah that we started with. It begins with a description of the humiliation of the Servant of God, but it concludes with a description of his final exaltation. God is the one speaking:
He shall see the fruit of the travail of his soul and be satisfied. . . . Therefore I will divide him a portion with the great, and he shall divide the spoil with the strong; because he poured out his soul to death, and was numbered with the transgressors; yet he bore the sin of many, and made intercession for the transgressors. (Is 53:11-12)
In two days, with the announcement of Jesus’ resurrection, the liturgy will give a name and a face to this victor. Let us keep watch and meditate in expectation. ___________________________________________ Translated from Italian by Marsha Williamson 1 See Howard Thurman, Jesus and the Disinherited (1949; repr., Boston: Beacon Press, 1996). 2 See Howard Thurman, Deep River and The Negro Spiritual Speaks of Life and Death (Richmond, IN: Friends United Press, 1975). 3 Fyodor Dostoevsky, The Brothers Karamazov, trans. Richard Pevear and Larissa Volokhonsky (New York: Farrar, Straus and Giroux, 2002), p. 246.
Text courtesy of Vatican Media (click here for original source) 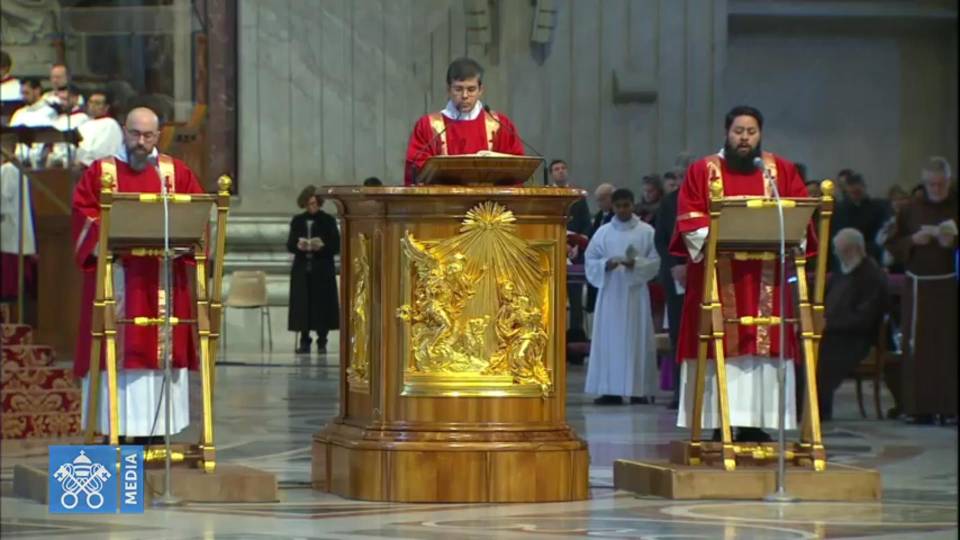 Celebration of the Lord's Passion in St. Peter's Basilica on April 19, 2019 (Courtesy of Vatican Media)