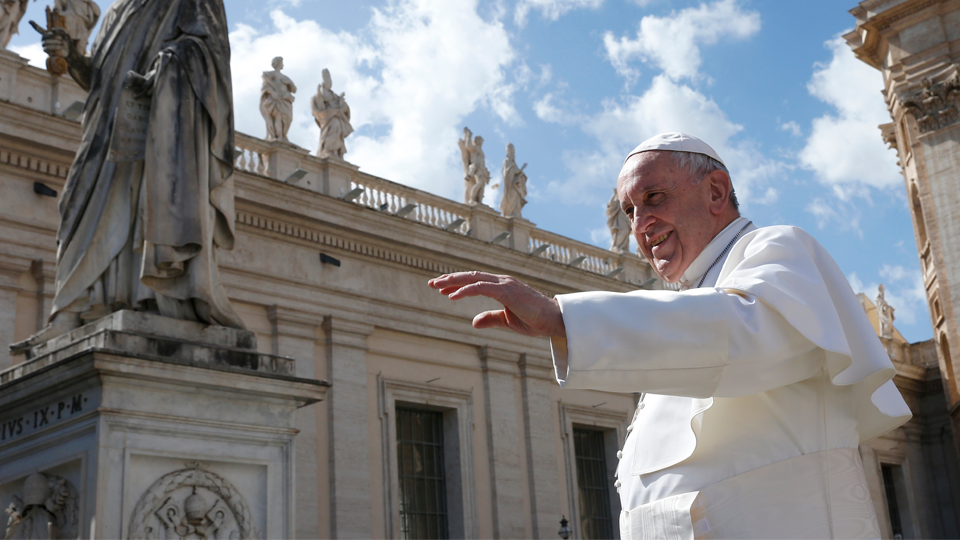 CNS Photo/ Paul Haring
A new Salt + Light documentary to be released in 2018 will explore how ordinary people have been inspired by Pope Francis' vision for a more unified, just and peaceful world. Francis has been pope for five years. How are you gauging his impact? Did you assess the progress made on financial and bureaucratic reform at the Vatican? Did you look at the number of young men entering diocesan seminaries or Jesuit communities? Did you highlight points of continuity and discontinuity between Francis and his immediate predecessors? This week has seen a flurry of media report cards on Francis' papal program. With a quick Google search you can find comments on his greatest accomplishments and his missteps. As I expected, most assessments of the pontificate focused on him and how he has changed–or not changed–the Church’s structures or positions on a few contentious issues. The more insightful assessments have gone a step further and highlighted his global influence as a moral leader. While I enjoy reading these assessments, I can’t help but think that the approach, largely focused on Francis, will unintentionally miss his most significant impact: the one he’s having on countless ordinary people around the world. It’s ironic, in a sense, that a man who relentlessly points to the world’s peripheries must shield his eyes from a celebrity-crazed spotlight. “When the sage points to the moon,” goes the Chinese proverb, “only a fool continues to look at the finger.” What is Francis pointing at? What is he tirelessly drawing our attention to? This is the question I’ve continuously asked myself during production of our forthcoming documentary, The Francis Impact. And after much research I’ve come to believe that the only way to truly gauge his impact is to look, not at him, but at those he has inspired and empowered to live or act in a new way. Francis believes, as the Second Vatican Council taught, that the Church’s sole purpose is that God’s kingdom be established (Gaudium et Spes 45; Evangelii Gaudium 180). He knows the Church does not exist for the Church’s sake; it's not an institution to be maintained, a list of teachings to abide by, or a mere place to pray. To quote one of Francis’ programmatic statements, “I prefer a Church which is bruised, hurting and dirty because it has been out on the streets, rather than a Church which is unhealthy from being confined and from clinging to its own security” (Evangelii Gaudium 49). He believes the Church is about changing the world. It’s about tearing down walls and building bridges. It’s about opening new channels for dialogue. It’s about creating opportunities for encounter. It’s about putting the poor at the center and walking together. It’s about the earth. It’s about everyone. Our new documentary shares remarkable stories of “the Francis impact” on ordinary people. But I hope it will do more than simply gauge that impact. I hope it will provoke a deeper reflection on what Francis believes is the Church’s role in the world: to change it for the better, to further align it with Jesus’ vision in the Gospel, and to bring everyone along for the ride.
The Francis Impact Summer 2018
To read more click HERE.