There's nothing really around that can turn lead into gold, but by God's grace we can turn trials into love.

That line is one of many gems from Archbishop Thomas Collins in February's Lectio Divina. This month Toronto's chief shepherd begins a series of reflection on the Letter of St. James.  In this particular episode he meditates on James 1:1-21. 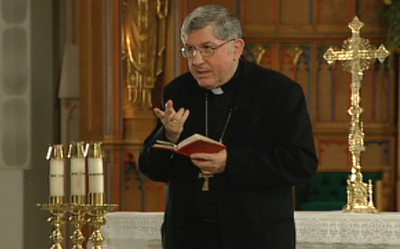 The quote above is from a section in which the Archbishop reflects on how we can deal with our daily irritations and difficulties.  As always, he puts things in perspective and reminds us that we're not alone in our struggles.  He also notes that what we deem as a trial may actually be a new opportunity for growth; the Archbishop points to the example of Blessed Cardinal John Henry Newman to illustrate this. In addition to sharing many insightful thoughts on trials, temptations, and anger, Archbishop Collins offers a reflection on wisdom.  Have you ever considered praying for holy wisdom?  The Archbishop suggests its one gift we should ask the Lord for. If the next three episodes on the Letter of St. James are anything like this first episode, we will be spiritually well fed over the next few months! The premiere episode of Lectio Divina with Archbishop Thomas Collins: The Letter of St. James airs this Sunday, February 13th, at 8:30pm ET/9:30pm PT.  Or catch the encore presentation Wednesday, February 16th at 8pm ET/9pm PT.