Faced with an unimaginable decision - #SLPilgrimage on the Mount of Olives 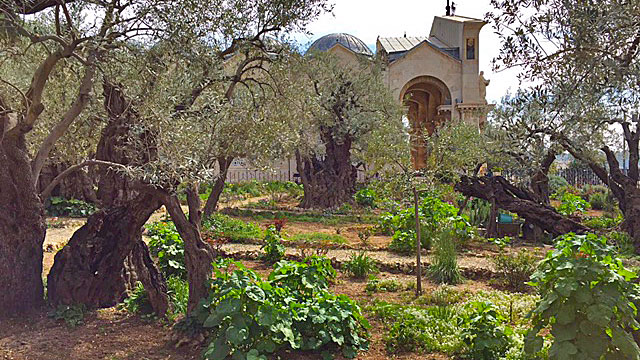 A Salt and Light team is on the ground in Israel for a Lenten pilgrimage where they’re also filming TV reflections.  On March 2nd they visited the Mount of Olives, half of which is decorated with natural olive tree gardens and the other half with Jewish tombs.
Standing on the Mount of Olives there is a spectacular view of the Old City of Jerusalem and the Kidron Valley.  From there you can effectively trace the final days of Jesus’ life from his weeping over the city, to his trial, execution and burial.  Perhaps the most moving site on the mount is Gethsemane, where Jesus underwent tremendous agony over his impending death.
The Church of All Nations was built on the site in 1924 and commemorates this Gospel event.  It is a beautiful, simple church, stark in atmosphere—which is very appropriate—and is surrounded by centuries-old olive tree gardens.  Walking amidst the olive trees is an equally moving experience as praying in the church; one’s imagination is sparked, especially in light of Luke’s descriptive account:

“He came out and went, as was his custom, to the Mount of Olives; and the disciples followed him. When he reached the place, he said to them, “Pray that you may not come into the time of trial.”  Then he withdrew from them about a stone’s throw, knelt down, and prayed, “Father, if you are willing, remove this cup from me; yet, not my will but yours be done.”  Then an angel from heaven appeared to him and gave him strength.  In his anguish he prayed more earnestly, and his sweat became like great drops of blood falling down on the ground.  When he got up from prayer, he came to the disciples and found them sleeping because of grief, and he said to them, “Why are you sleeping? Get up and pray that you may not come into the time of trial.” 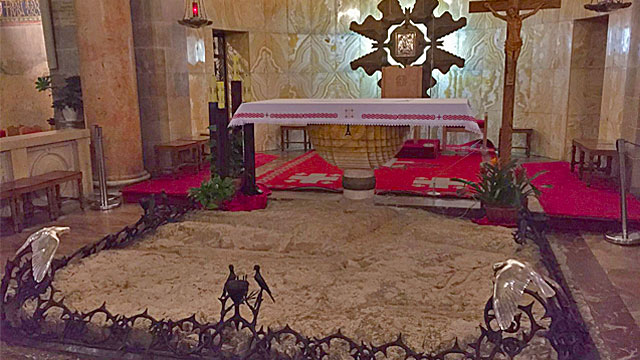 What confronts the pilgrim who comes to Gethsemane is the humanity of Jesus in the decision he had to make.  Even he was not immune from the anxiety felt by one staring death in the face.  A wonderful and informed description of the scene can be read in the late Fr. Jerome Murphy-O’Connor’s archaeological guide to the Holy Land:

“Having eaten the Paschal meal somewhere in the city (Lk 22:10), Jesus went forth across the Kidron valley, where there was a garden (Jn 18:1) on the Mount of Olives called Gethsemane (Mk 14:26).  The place was known to Judas, for Jesus often met there with his disciples (Jn 18:2), perhaps to take a rest before starting the climb up the steep steps en route to Bethany (where his friends Mary, Martha and Lazarus lived).  Jesus knew his life to be in danger (Jn 11:8); he suspected Judas of treachery (Mk 14:17-21).  On his way up the Kidron valley he could not have avoided seeing the tombs in the bright moonlight.  Awareness of the imminence of death struck him with great force; he had to stop and be alone for a moment because a decision had to be made.  His enemies would come from the city, but ten minutes’ fast walking would bring him to the top of the Mount of Olives with the open desert before him.  Escape would be easy; he could postpone the inevitable.  Only in prayer could he find the answer to the agonizing question of whether to stand or retreat.” (The Holy Land: An Oxford Archaeological Guide, 5th edition, 2008)

--
Sebastian Gomes is an English producer for Salt + Light.