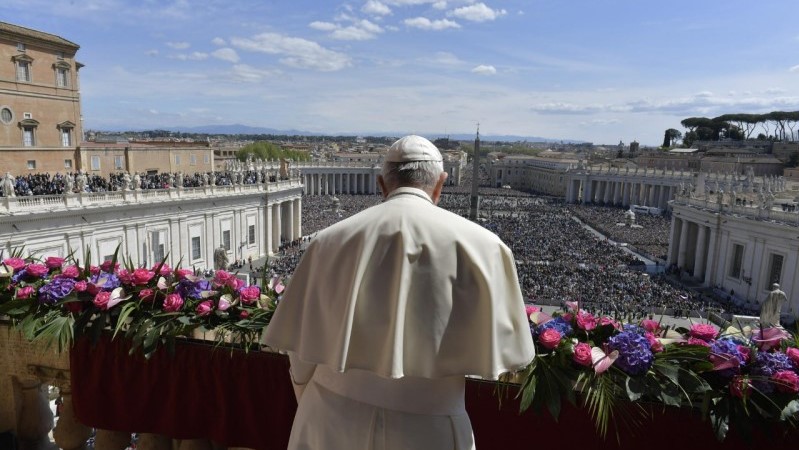 On Easter Sunday, April 17, 2022, after celebrating Mass in St. Peter's Square, Pope Francis gave his annual Easter blessing "urbi et orbi" (to the city and to the world). Read below the full text of the Easter message the Holy Father delivered on this occasion. All who receive this blessing are entitled also to receive a plenary indulgence. To learn more about indulgences and the normal conditions for receiving one, read this blog.

Dear brothers and sisters, Happy Easter! Jesus, the Crucified One, is risen! He stands in the midst of those who mourned him, locked behind closed doors and full of fear and anguish. He comes to them and says: “Peace be with you!” (Jn 20:19). He shows the wounds in his hands and feet, and the wound in his side. He is no ghost; it is truly Jesus, the same Jesus who died on the cross and was laid in the tomb. Before the incredulous eyes of the disciples, he repeats: “Peace be with you!” (v. 21). Our eyes, too, are incredulous on this Easter of war. We have seen all too much blood, all too much violence. Our hearts, too, have been filled with fear and anguish, as so many of our brothers and sisters have had to lock themselves away in order to be safe from bombing. We struggle to believe that Jesus is truly risen, that he has truly triumphed over death. Could it be an illusion? A figment of our imagination? No, it is not an illusion! Today, more than ever, we hear echoing the Easter proclamation so dear to the Christian East: “Christ is risen! He is truly risen!” Today, more than ever, we need him, at the end of a Lent that has seemed endless. We emerged from two years of pandemic, which took a heavy toll. It was time to come out of the tunnel together, hand in hand, pooling our strengths and resources... Instead, we are showing that we do not yet have within us the spirit of Jesus but the spirit of Cain, who saw Abel not as a brother, but as a rival, and thought about how to eliminate him. We need the crucified and risen Lord so that we can believe in the victory of love, and hope for reconciliation. Today, more than ever, we need him to stand in our midst and repeat to us: “Peace be with you!” Only he can do it. Today, he alone has the right to speak to us of peace. Jesus alone, for he bears wounds… our wounds. His wounds are indeed ours, for two reasons. They are ours because we inflicted them upon him by our sins, by our hardness of heart, by our fratricidal hatred. They are also ours because he bore them for our sake; he did not cancel them from his glorified body; he chose to keep them forever. They are the indelible seal of his love for us, a perennial act of intercession, so that the heavenly Father, in seeing them, will have mercy upon us and upon the whole world. The wounds on the body of the risen Jesus are the sign of the battle he fought and won for us, won with the weapons of love, so that we might have peace and remain in peace. As we contemplate those glorious wounds, our incredulous eyes open wide; our hardened hearts break open and we welcome the Easter message: “Peace be with you!” Brothers and sisters, let us allow the peace of Christ to enter our lives, our homes, our countries! 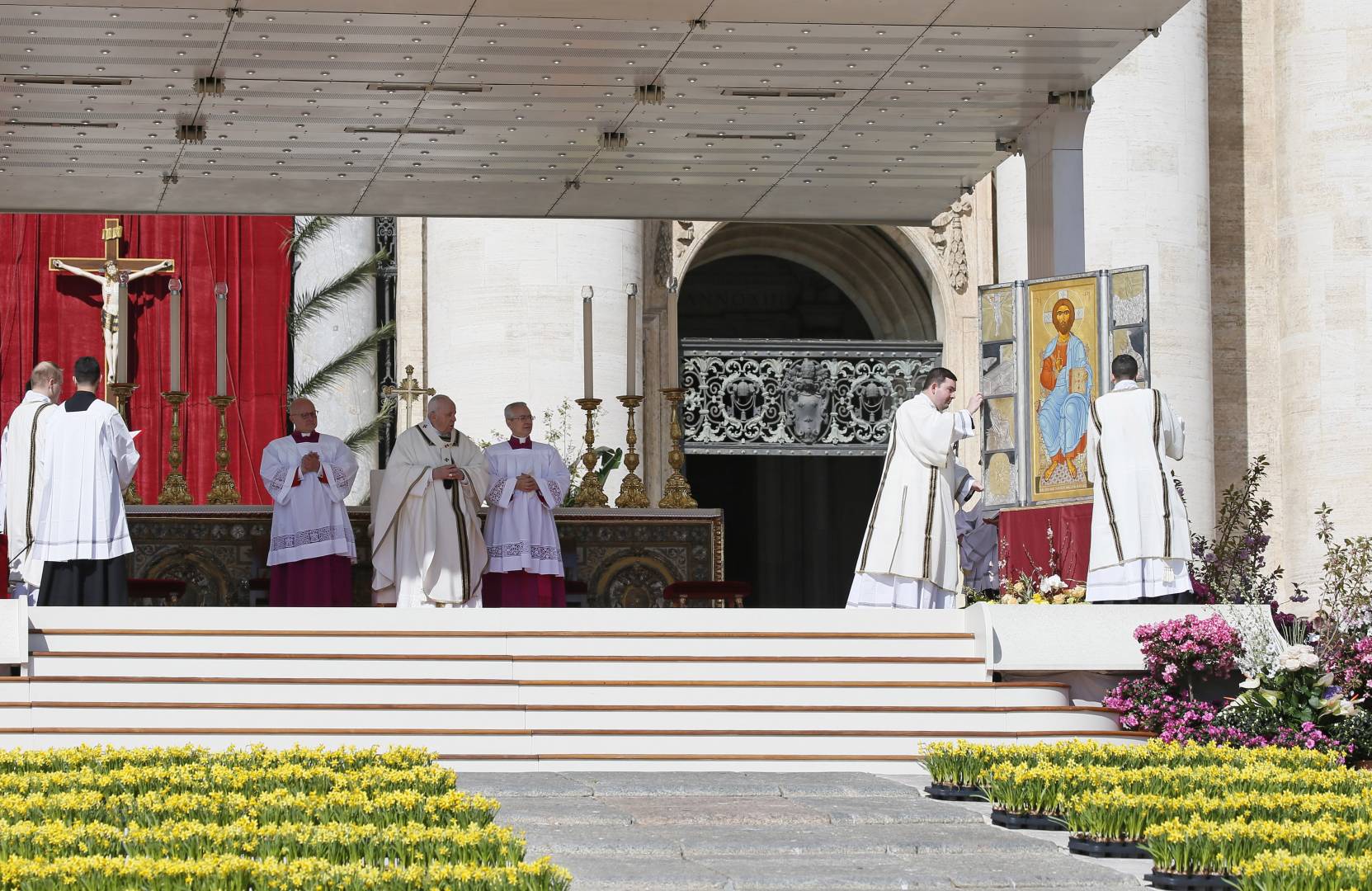 Pope Francis watches as servers uncover an icon of the risen Jesus at the start of Easter Mass in St. Peter's Square at the Vatican April 17, 2022. (CNS photo/Paul Haring)
May there be peace for war-torn Ukraine, so sorely tried by the violence and destruction of the cruel and senseless war into which it was dragged. In this terrible night of suffering and death, may a new dawn of hope soon appear! Let there be a decision for peace. May there be an end to the flexing of muscles while people are suffering. Please, please, let us not get used to war! Let us all commit ourselves to imploring peace, from our balconies and in our streets! Peace! May the leaders of nations hear people’s plea for peace. May they listen to that troubling question posed by scientists almost seventy years ago: “Shall we put an end to the human race, or shall mankind renounce war?” (Russell-Einstein Manifesto, 9 July 1955). I hold in my heart all the many Ukrainian victims, the millions of refugees and internally displaced persons, the divided families, the elderly left to themselves, the lives broken and the cities razed to the ground. I see the faces of the orphaned children fleeing from the war. As we look at them, we cannot help but hear their cry of pain, along with that of all those other children who suffer throughout our world: those dying of hunger or lack of medical care, those who are victims of abuse and violence, and those denied the right to be born. Amid the pain of the war, there are also encouraging signs, such as the open doors of all those families and communities that are welcoming migrants and refugees throughout Europe. May these numerous acts of charity become a blessing for our societies, at times debased by selfishness and individualism, and help to make them welcoming to all. May the conflict in Europe also make us more concerned about other situations of conflict, suffering and sorrow, situations that affect all too many areas of our world, situations that we cannot overlook and do not want to forget. May there be peace for the Middle East, racked by years of conflict and division. On this glorious day, let us ask for peace upon Jerusalem and peace upon all those who love her (cf. Ps 121 [122]), Christians, Jews and Muslims alike. May Israelis, Palestinians and all who dwell in the Holy City, together with the pilgrims, experience the beauty of peace, dwell in fraternity and enjoy free access to the Holy Places in mutual respect for the rights of each. May there be peace and reconciliation for the peoples of Lebanon, Syria and Iraq, and in particular for all the Christian communities of the Middle East. May there be peace also for Libya, so that it may find stability after years of tensions, and for Yemen, which suffers from a conflict forgotten by all, with continuous victims: may the truce signed in recent days restore hope to its people. 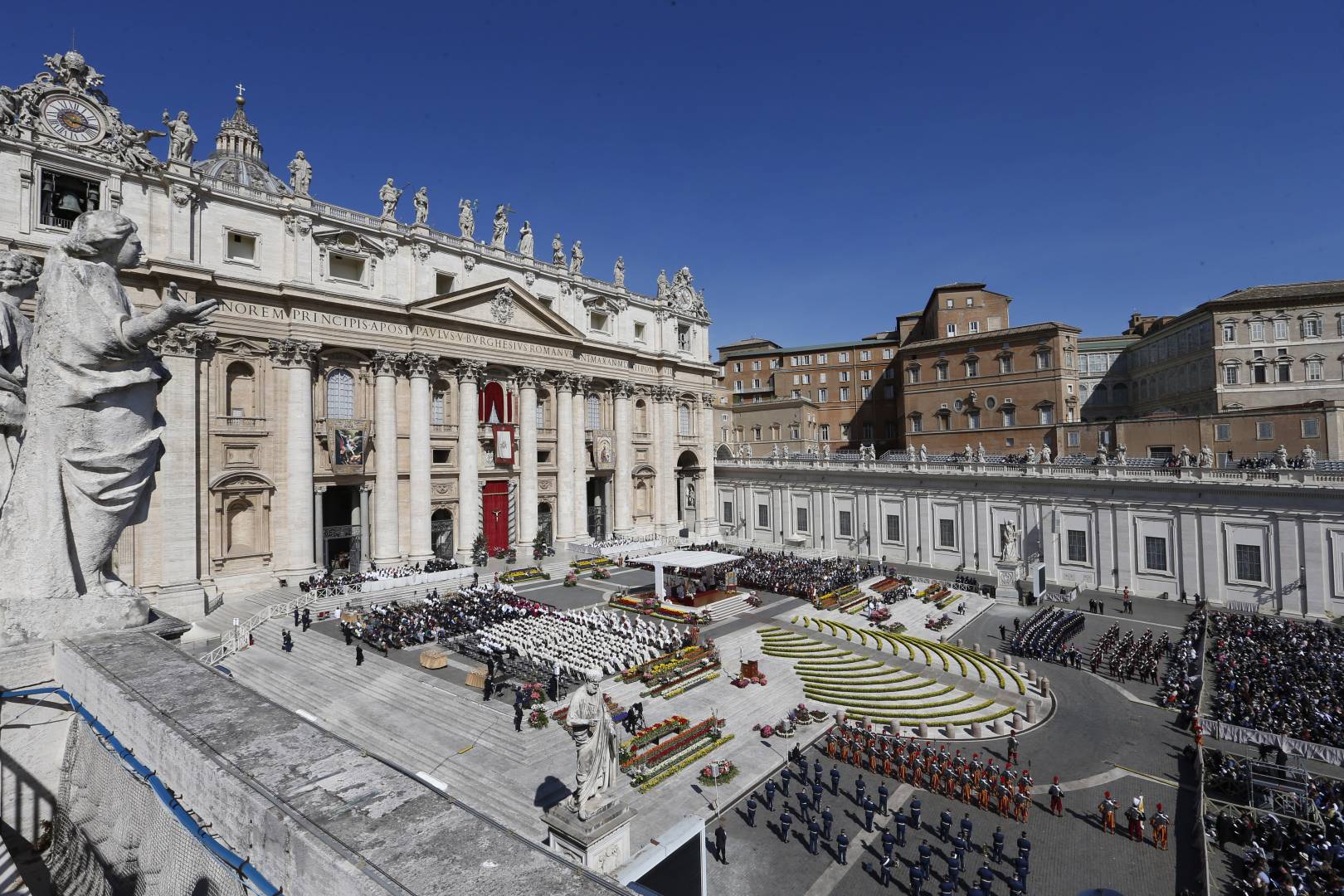 Pope Francis celebrates Easter Mass in St. Peter's Square at the Vatican April 17, 2022. (CNS photo/Paul Haring)
We ask the risen Lord for the gift of reconciliation for Myanmar, where a dramatic scenario of hatred and violence persists, and for Afghanistan, where dangerous social tensions are not easing and a tragic humanitarian crisis is bringing great suffering to its people. May there be peace for the entire African continent, so that the exploitation it suffers and the hemorrhaging caused by terrorist attacks – particularly in the Sahel region – may cease, and that it may find concrete support in the fraternity of the peoples. May the path of dialogue and reconciliation be undertaken anew in Ethiopia, affected by a serious humanitarian crisis, and may there be an end to violence in the Democratic Republic of Congo. May prayer and solidarity not be lacking for the people in the eastern part of South Africa, struck by devastating floods. May the risen Christ accompany and assist the people of Latin America, who in some cases have seen their social conditions worsen in these difficult times of pandemic, exacerbated as well by instances of crime, violence, corruption and drug trafficking. Let us ask the risen Lord to accompany the journey of reconciliation that the Catholic Church in Canada is making with the indigenous peoples. May the Spirit of the risen Christ heal the wounds of the past and dispose hearts to seek truth and fraternity. Dear brothers and sisters, every war brings in its wake consequences that affect the entire human family: from grief and mourning to the drama of refugees, and to the economic and food crisis, the signs of which we are already seeing. Faced with the continuing signs of war, as well as the many painful setbacks to life, Jesus Christ, the victor over sin, fear and death, exhorts us not to surrender to evil and violence. Brothers and sisters, may we be won over by the peace of Christ! Peace is possible; peace is a duty; peace is everyone’s primary responsibility! Text courtesy of Libreria Editrice Vaticana 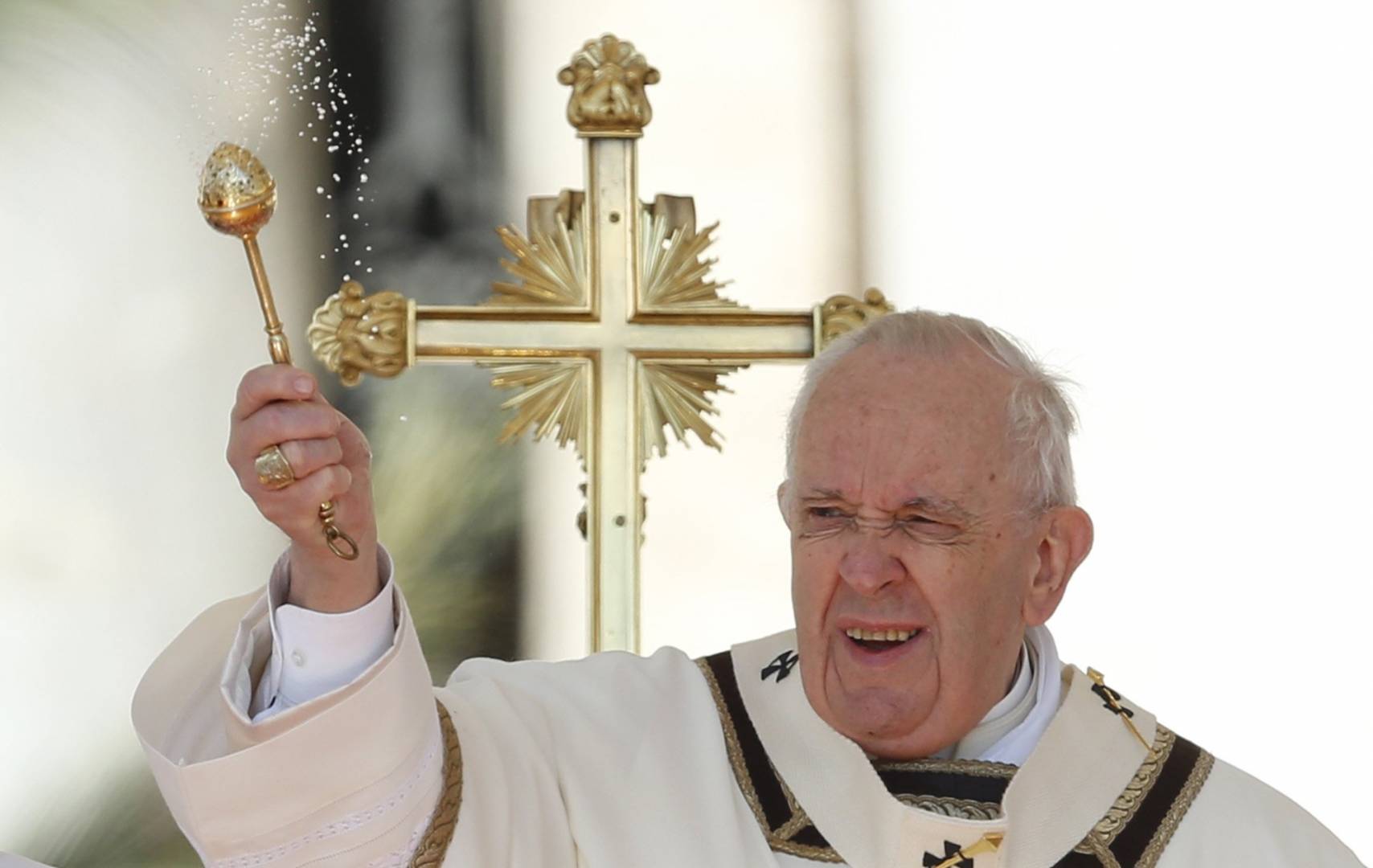 Pope Francis blesses the faithful with holy water at the start of Easter Mass in St. Peter's Square at the Vatican April 17, 2022. (CNS photo/Paul Haring)