Diving into the Deep-End of Terrorism 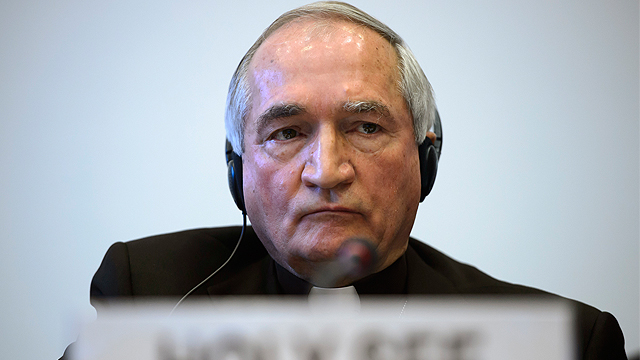 When one thinks of the Holy See, they instinctively turn their gaze to the Vatican, the epicenter of power in the Catholic Church. It is from there that we hear the voices of popes, prefects and other officials, who pronounce the message of the Church. However this is not the only place where the Holy See speaks on the global stage.
One of the better-known pulpits is the Holy See’s Mission to the United Nations in New York. However another of those voices seldom heard in the mainstream, is that of Archbishop Silvano Tomasi, the Permanent Observer of the Holy See to the United Nations in Geneva. He tirelessly goes before UN bodies in Geneva, bravely speaking as the voice of the Church and often having to defend it from incredible scrutiny.
Last week, he gave a superb talk that unfortunately, went largely unnoticed. It was to the UN Human Rights Council, where he discussed the affects of terrorism on the enjoyment of human rights and fundamental freedoms. Beyond outlining the obvious evils of terrorism and giving some startling statistics indicating its rapid and concentrated increase in certain parts of the world, he chose to venture into taboo topics within the terrorism portfolio.
Citing the Compendium of Catholic Social Teaching, the Archbishop said, “Terrorism has now become a shadowy network of political collusion.” He continued in his own words, saying, “antagonistic political powers are tempted to play a role by supplying resources of modern technology, advanced weaponry and financing to these terrorist organizations.” “Antagonistic political powers” is a very carefully determined choice of words, and in all likelihood is a scathing criticism of states, and the very real problem of state-sponsored terrorism.
Be it overt or covert, the involvement of countries around the world in aiding terrorism for varying political agendas is nothing new. However the timing of the Archbishop’s words are crucial. There have been some very difficult questions asked on the international stage as of late, over the involvement of some countries and members of certain governments in the arming and funding of terrorist groups such as ISIS. Tomasi is no doubt aware of this, and one can be certain that there would be more than few delegations present for his talk that would have much rather he not highlight such topics.
This really begs the question of how deep the Church is prepared to wade into the murky depths of modern international conflict? It’s one thing to broker the reestablishment of relations between two states, but to investigate and get to root of the funding of terror is an area many nation states have been hesitant to go all in on. However should the Church choose to march down this path, it is a noble cause, one that will hopefully inspire others to seek out similarly opaque truths in international affairs.
The other hot topic in the Archbishop’s address to the UN Human Rights Council was his clear and candid concern for the regression of people’s rights in the name of fighting terrorism. He said:
“Governments throughout the world, in some cases using terrorism as an excuse, are preoccupied with national security and counterterrorism efforts, some of which also infringe upon the enjoyment of human rights and fundamental freedoms.”
This is without question directed towards western countries, where serious debates over topics such as personal privacy are taking place. One would have to be living under a rock to not be aware of the revelations of Edward Snowden. He is the former NSA contractor currently living in Russia for fear of arrest, after blowing open the full scope of the surveillance practices utilized by the United States.
It is these kinds of policies that the Church through Archbishop Tomasi is expressing a concern for. Whether his words are his own, or those of his superiors, is a question for the Secretariat of State in Vatican City. However much like the question of the funding of terrorism, it is a real topic, which has real life consequences for real people. If the Church is going to truly reach out to the peripheries, it needs to do so in the political landscape as well. It must go and embrace the issues that many would prefer seen swept away to the margins. Time will tell if the Church through the tenacity of people like Archbishop Tomasi, can lift veil of secrecy and inject into the conversation, topics of substance that will allow us all to live in a more just, peace filled world.