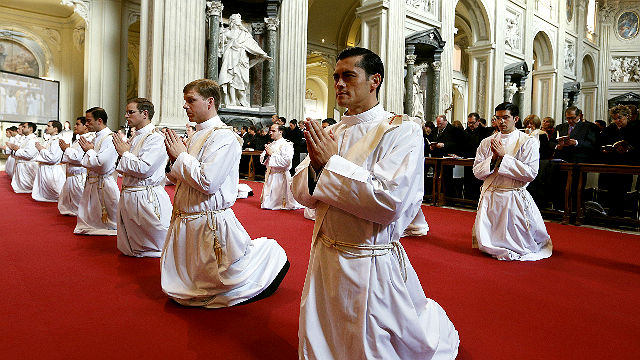 One main difference between the Vocations to the Single and Religious life and the Vocations to the Ordained and the Married Lives is that Ordination and Marriage, in the Catholic Church, are Sacraments. Let’s look at the Vocation to the Ordained Life and the Sacrament of Ordination. It is very common to hear about the Vocation to the Priestly Life. But the vocation is not necessarily to the Priesthood, but to the Ordained Life. When we talk about the Ordained Life, we are not just talking about priests. There are three orders: bishops (the Episcopate), priests (the Presbiterate) and deacons (the Diaconate). In the times of the Apostles, as the Gospel was proclaimed and churches (Christian communities) began to be formed, elders were appointed to lead them. When the churches became too large, a supervisor of the elders was appointed. This person was usually appointed by one of the apostles when they visited the various churches and was called the “episkopos” which means overseer, in Greek. The episkopoi, or overseers, became the bishops. When the churches grew even more, these bishops began to need assistants to represent them in different churches. These are what we call today, “priests”. The word priest comes from the Greek word “presbyteroi”, which was the word used for elder. The word in Latin is “sacerdos”. There were also other ministers known as “diakonoi”, what today we refer as deacons. The word diakonoi, literally means server, as in the ones who served the food. The first deacons were chosen to beg for food for the Greek-speaking Jewish widows – in those days, they were the most marginalised group (see Acts 6:1-6). Deacons originally had a very specific function in the Church: serving the most marginalised- separate from the priesthood, but as things evolved, slowly the diaconate disappeared as a separate ministry and became merely a step toward the priesthood. The permanent diaconate as it existed in the first couple of centuries was renewed after the Second Vatican Council and so now many dioceses have married men who are ordained as permanent deacons. St. Paul, in his first letter to Timothy, chapter 3, speaks about the qualifications for the overseers (episkopoi) and for deacons (diakonoi). In the first centuries, in addition to bishops, presbyters and deacons, there were also other ministers in the church who were not ordained. These included subdeacons, who helped the deacons with their duties; exorcists, who assisted at rituals of initiation and repentance; lectors, who read the scriptures during worship; porters, who had janitorial and guard duties; and acolytes, who accompanied the bishops and acted as secretaries and messengers. As clergy began to perform many of these functions, they began to disappear as separate from the priesthood. In 252 Pope Cornelius listed these, as well as the order of priest and deacons, as the seven ranks of the Church of Rome. When the Permanent Diaconate was restored, the structure was changed to what we have today: The Orders of divine institution: the Diaconate, the Presbiterate and the Episcopate. Paul VI did away with the subdiaconate, whose functions were given to lectors and acolytes; these two were kept but no longer considered Orders, but ministries conferred by installation and not ordination (all deacons are installed as acolytes and lectors first, before being ordained as deacons; all priests are ordained as deacons first; all bishops are priests.) According to the Vatican II document, Presbyterorum Ordinis, The Decree on the Ministry and Life of Priest, the primary duty of a priest is to proclaim “the Gospel of God to all,”(4) to bring the Sacraments to the people (5) and to teach and lead the people of God (6). In a way, these are the same duties of a Bishop and a Deacon, however the deacon has very specific limitations to his Sacramental ministry and how he is called to lead the people. In particular, the diaconate has a charitable function. Deacons are called to minister to the most marginalised. Bishops, on the other hand, are literally the successors of the Apostles. As such, they constitute the Episcopal body. In this sense, the Bishops are still overseers, with their main role being the teaching and pastoral direction. (For more information, see the Vatican II document, Christus Dominus, Decree Concerning the Pastoral Office of Bishops in the Church) In the “What is a Sacrament” series, I explained that every with every Sacrament, what I call a “metaphysical occurrence” takes place. Every Sacrament effects a change to those who receive it, and it is more than just a physical change (the bread and wine become the body and blood of Christ; the husband and wife become one flesh, etc). We call these changes “mysteries.” In the Sacrament of Holy Orders the metaphysical change that takes place is that the person ordained becomes the person of Christ when he officiates the Sacraments. This is what we call “in persona Christi”. The bishop represents the fullness of Christ for the Church. The priest shares in the bishop’s office and the deacon is ordained to the ministry of service (Christ the servant), not to the priesthood of Christ. Clearly there is more to Ordination, and so I will dedicate a few more weeks to this Vocation.