Deacon-structing the Twelve Days of Christmas 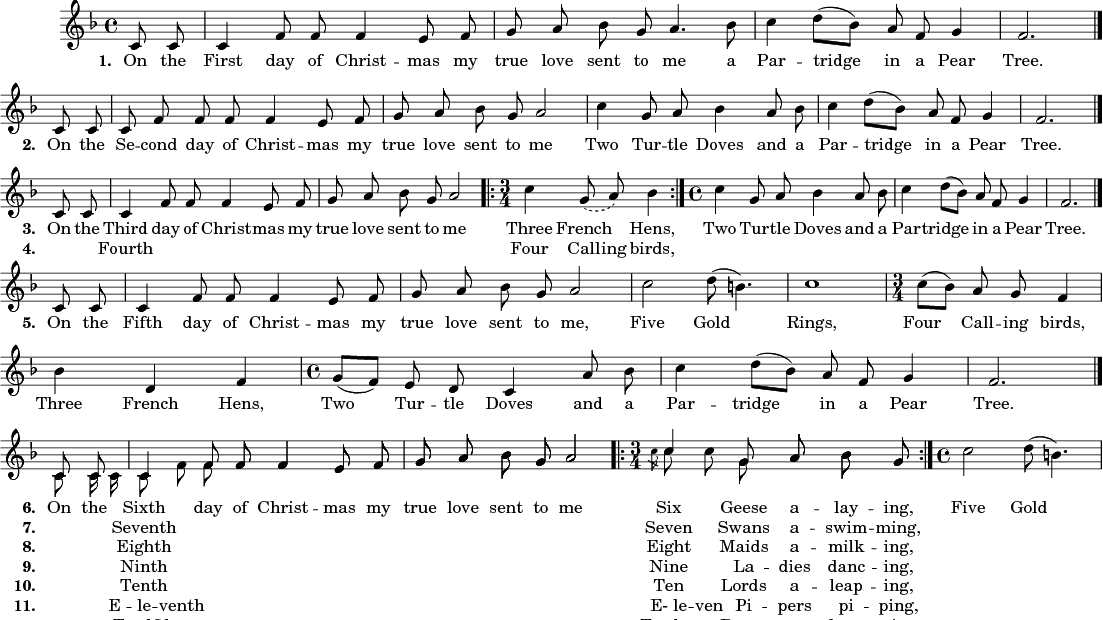 Melody of "The 12 days of Christmas" from Frederic Austin's 1909 arrangement (from Wikimedia Commons)
I've said before that I am confused about when the season of Christmas ends. It makes sense that it should last until the Feast of the Presentation of Our Lord. That would mean we'd be listening to Christmas carols until February 2nd! But I am also confused because the Liturgical Calendar tells us that the Christmas season ends on the Feast of the Baptism of Our Lord (next weekend), but in reality, that Sunday is the first Sunday in Ordinary Time. I like to keep my Christmas lights up until AFTER the Feast of the Baptism. Secular tradition, however, tells us that the Christmas season is only 12 days. According to this, it ends today, on the Feast of the Epiphany. I don't know what came first, the tradition that there are 12 days to Christmas or the song that we all love to hate. A quick search on the Internet will give you more information than you could possibly want about the song, "The Twelve Days of Christmas". In case you are not familiar with it, the singer boasts about the gifts that he or she receives each of these 12 days:

On the first day of Christmas my true love sent to me: A partridge in a pear tree.

The point of the song (I would think) is a sort of a memorization game. Singers have to repeat each line, adding more and more items. Children love to play these games. The gifts for the following days are:

No one really knows where the song comes from or what the gifts mean. However, you may have come across the "Christian meaning" of the song. I first heard this interpretation at church when I was growing up: Our priest in the English-language parish printed it in the bulletin around Christmas time. The basic idea is that the song was written in England and was used to teach Catholics basic articles of the faith at a time when Catholicism could not be practiced in the 16th and 17th centuries. This theory doesn't make much sense since most of these "articles of faith" are shared between Catholics and Protestants and has been debunked (see snopes.com if you want to learn more). However, the meaning of the gifts is explained this way: The first "hidden meaning" in the song is the so-called "True Love" that gives all the gifts. It does not refer to a human lover or suitor, but rather, it refers to God. God is our one true love. the "me" who receives the gifts, of course, refers to every baptised person. The partridge in the pear tree represents Jesus Christ. Apparently, if their young are threatened by predators, partridge moms will feign injury to draw away predators and in this way protect their young, even if it means sacrificing themselves for them. That is very Christ-like.

2 Turtle Doves = the Old and New Testaments. 3 French Hens = the Theological Virtues: Faith, Hope, and Charity; or the three persons of the Holy Trinity. 4 Calling Birds = the four Gospels and/or the Four Evangelists: Matthew, Mark, Luke, and John. 5 Golden Rings = the first five books of the Old Testament, the "Pentateuch": Genesis, Exodus, Leviticus, Numbers, and Deuteronomy. 6 Geese A-laying = the six days of creation. 7 Swans A-swimming = the seven Gifts of the Holy Spirit: wisdom, understanding, counsel, fortitude, knowledge, piety, and fear of the Lord; or the seven sacraments: Baptism, Eucharist, Confirmation, Reconciliation, Anointing of the Sick, Marriage, and Holy Orders. 8 Maids A-milking = the eight Beatitudes (according to Matthew 5:3-10 there are nine! Luke 6:20–22 has four blessings and four woes, so that's eight). 9 Ladies Dancing = the nine Fruits of the Holy Spirit: Love, Joy, Peace, Patience, Goodness, Kindness, Faithfulness, Gentleness, and Self-control (according to Galatians 5:22-23). The Catechism of the Catholic Church #1832 says that the tradition of the Church lists twelve of them: charity, joy, peace, patience, kindness, goodness, generosity, gentleness, faithfulness, modesty, self-control, and chastity (according to the Vulgate translation of Galatians). 10 Lords A-leaping = the Ten Commandments. 11 Pipers Piping = the eleven faithful Apostles (Simon Peter, Andrew, James brother of John, John, Philip, Bartholomew, Matthew, Thomas, James son of Alphaeus, Simon the Zealot, and Jude). 12 Drummers Drumming = the twelve points of doctrine in the Apostle's Creed.

Although it's interesting, it's useless if you actually need to remember all these things. Since World Youth Day 2019 is two weeks away and many of you are preparing to go to Panama, I thought I'd share with you the Panamanian version of the "12 Days of Christmas," which I heard a lot while growing up and which the Vincentian Fathers in Panama also printed in that Mass bulletin so many years ago (I'd love to get my hands on a recording of it). According to the American Forces Radio and Television Service (AFRTS) Archive, the song was recorded by Cal Hackman and Pete Franquet in the SCN studio in Panama in 1969 or 1970. The song was written by a young girl named Carrie Ellis. Pete played it on his radio program and it became a hit in Panama.

On the first day of Christmas, my true love sent to me — a pico feo in a mango tree. 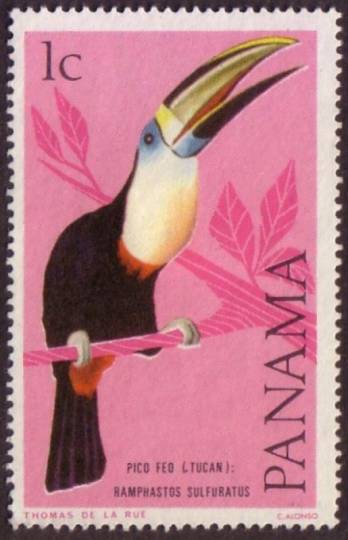 As you prepare for WYD, look some of these animals up. And if you do see a pico feo, an armadillo, or an iguana while you're in Panama, take a photo and remember the 12 Days of Christmas. Perhaps this year, because of WYD and its Annunciation theme, we should extend the Christmas season until February 2nd!