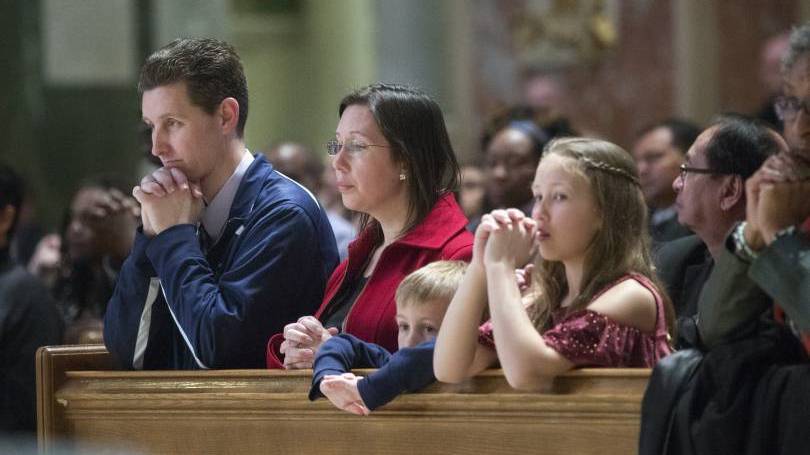 CNS photo/Jaclyn Lippelmann, Catholic Standard
So far we’ve looked at each part of the Mass and explained what we do and why. We started by looking at at the Entrance, the Penitential Rite and the Gloria. Then we looked at the Liturgy of the Word, which includes the Readings, the homily, the Creed, and the Prayers of the Faithful. Last week, we looked at the beginning of the Liturgy of the Eucharist, which includes the preparation of the gifts. Today we continue with the Eucharistic Prayer. The Eucharistic Prayer, which begins when the priest extends his arms and says, “The Lord be with you… lift up your hearts… let us give thanks to the Lord our God…” is the heart of the Mass. This is the centre and high point of the Mass. It is a thanksgiving prayer, the Church’s great “grace before meals”. As we begin it, we acclaim with the priest that it is most fitting to give our thanks and praise to God. Throughout the prayer we give thanks to God for our salvation in Christ, the mystery of our faith. “We proclaim your death, O Lord, and profess your resurrection until you come again.” “When we eat this bread and drink this cup, we proclaim your death, O Lord, until you come again.” “Save us, Saviour of the world, for by your cross and resurrection you have set us free.” The Roman Missal offers us ten versions of the Eucharistic Prayer, and there are three others for use in Masses with children. The main elements of every Eucharistic Prayer are the same and follow a sequenced pattern (GIRM 79): a) The Thanksgiving (expressed especially in the Preface), in which the priest, in the name of the whole people of God and united with them, glorifies God the Father and gives thanks to God for the work of salvation, according to the day, feast, or time of year. b) The Sanctus (Holy, Holy, Holy), by which we join our voices in singing God’s praise with all the heavenly powers. This acclamation along with the memorial acclamation and great Amen should be sung - by everyone, never by the choir alone. c) The Epiclesis, in which we call on the Holy Spirit so that both the gifts offered and those offering them become Christ’s Body and Blood for the salvation of those who will share it. d) The Institution Narrative and Consecration, by which we acknowledge before God with gratitude the words and actions of Christ during the Last Supper, when he offered his Body and Blood as bread and wine, gave them to the apostles to eat and drink, and commanded them to do so always in his memory. e) The Anamnesis by which we fulfill Christ’s command by celebrating this memorial, recalling especially his Passion, Resurrection and Ascension into heaven. f) The Oblation, by which, in this very celebration, we, the Body of Christ, the Church gathered here and now, stand united with Christ in the Holy Spirit in his self-offering to the Father. In doing so, we also learn to offer our very selves, and thus day by day to be brought into unity with God and with each other through Christ, so that God may at last be all in all. (This is the real “offertory” of the Mass.) g) The Intercessions, by which we pray that God will act in this assembly and continue the work of salvation in the world. These intercessions proclaim the presence of the whole Church: living and dead, heaven and earth, those present and those absent, those assembled with the local and universal Church. h) And finally, the Concluding Doxology, in which we return to praise, giving glory to God through Christ, and with Christ and in Christ by our joyous great Amen. The assembly thus affirms all that has been prayed in this our most significant acclamation in the entire celebration. The Eucharistic Prayer may be spoken or sung. By its very nature, it requires that only the Priest say it, in virtue of his Ordination. The people, for their part, should associate themselves with the Priest in faith and in silence, as well as by means of their interventions as prescribed in the course of the Eucharistic Prayer (GIRM 147). In a way, the Priest is praying on behalf of all of us. 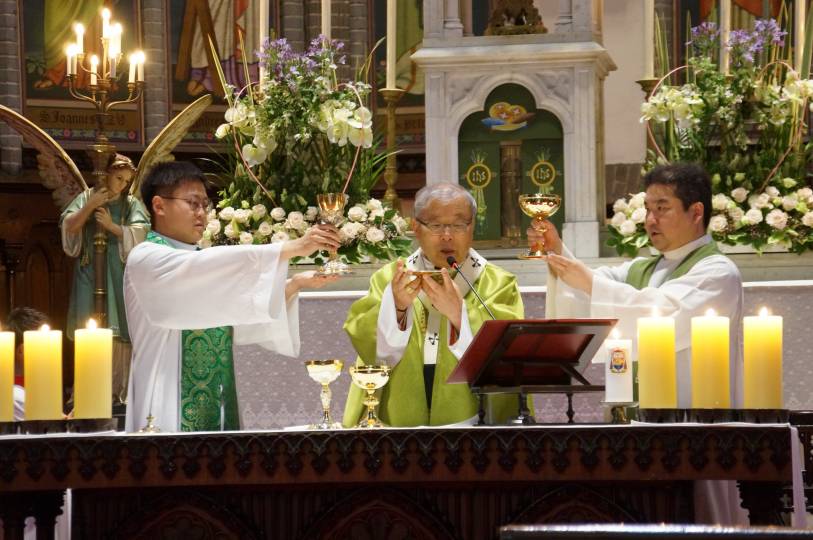 A word about Posture

In the earliest surviving documents on the celebration of the Liturgy of the Eucharist, the assembly stood throughout. This posture was the Church’s posture of prayer as it was a sign of respect and reverence. It was also considered an affirmation of our sharing in Christ’s Resurrection. Kneeling was considered a penitential posture and on Sundays, even during the liturgy, was forbidden. However, gradually for reasons unknown to me, the posture for the Eucharistic Prayer and for other moments during the Mass changed to kneeling. Since the beginning of the reform of the liturgy following the Second Vatican Council, each edition of the General Instruction has allowed the whole assembly to return to standing during the Eucharistic Prayer, from the prayer over the gifts to the end of the Mass except during the Consecration. Because of the broad range of devotional sentiment concerning this matter, this direction has been implemented to varying degrees across Canada in the years since with some dioceses opting to stand except for the Consecration, others choosing to kneel from after the Sanctus until the Memorial Acclamation, and still others to kneel throughout the Eucharistic Prayer. If you traveled across the country, you saw that it was a bit all over the place. When the latest edition of the General Instruction was introduced in 2010, the Bishops of Canada took the opportunity to implement a basic level of uniformity in posture by allowing only these two options: 1- The faithful can kneel after the Sanctus (Holy, Holy, Holy) until the end of the Eucharistic Prayer (after the Great Amen) and again before Communion when the Priest says "This is the Lamb of God..." (Ecce Agnus Dei). 2- The faithful can kneel only for the Consecration and then stand after the wine is “offered”. Everyone should kneel except when prevented by ill health, or for reasons of lack of space, of the large number of people present, or for another reasonable cause. However, those who do not kneel ought to make a profound bow when the Priest genuflects after the Consecration. When you’re traveling or visiting a different parish, for the sake of uniformity in gestures and bodily postures, you should follow the instructions which the Deacon, a lay minister, or the Priest gives. In short, when in Rome do as the Romans do (GIRM 43-44). After the Consecration comes the Anamnesis, when the Priest says, “The mystery of faith”. The people respond with the acclamation, using one of the prescribed formulas. At the end of the Eucharistic Prayer, the Priest takes the paten with the host and the chalice and elevates them both while pronouncing alone the Doxology (“through Him, with Him and in Him…”). At the end the people acclaim, Amen. After this, the Priest places the paten and the chalice back on the corporal (GIRM 150). During the Eucharistic Prayer, the Deacon exercises his ministry near the altar, assisting whenever necessary with the chalice and the Missal. However, insofar as possible, he stands back slightly, behind the concelebrating Priests standing around the principal celebrant (GIRM 215). The Deacon kneels for the consecration (or after the Holy, Holy as is your local practice) but stands again after the Consecration. At the concluding Doxology of the Eucharistic Prayer, the Deacon stands next to the Priest and holds the chalice elevated while the Priest elevates the paten with the host until the people have acclaimed Amen (GIRM 179).

It is appropriate to ring a bell several times during the Eucharistic Prayer. I would say that, practically, it is to indicate to people when they are to kneel and pay attention - since the Mass used to be in Latin and people couldn't understand or see. The first bell is rung at the Epiclesis, when the Priest extends his hands over the bread and wine and asks for the Holy Spirit to descend upon these gifts. The bell is then rung at each elevation by the Priest, according to local custom (could be three times or just one). If incense is being used, when the host and the chalice are shown to the people after the Consecration, a minister incenses them (GIRM 151). That concludes the Eucharistic Prayer.  Come back next week and we can go a little more in depth into the meaning of what's happening during the Eucharistic Prayer. 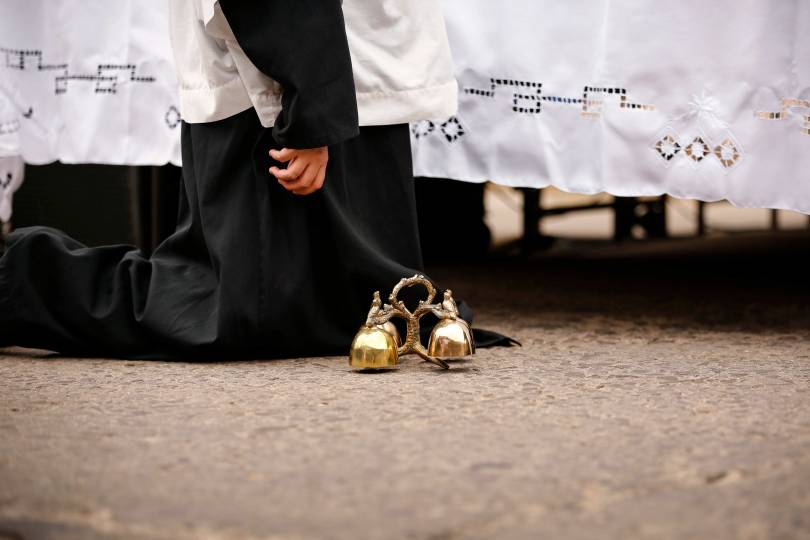 CNS/Nancy Wiechec
Write to me and let me know what is the practice in your parish. Do you kneel or stand during the Eucharistic Prayer? Do you stay kneeling after the Consecration? Did your pastor change it 8 years ago and did it upset you? [Most of the information used in these blog posts comes from the text of a video made by Salt + Light Television in partnership with the National Liturgy Office of the Canadian Conference of Catholic Bishops in 2011, to help explain the latest changes to the language of the English Roman Missal, titled, THE CELEBRATION OF EUCHARIST for the Twenty-First Century. The project was headed by Fr. Bill Burke and the text of that video was written by Canadian liturgist Margaret Bick, both of whom I owe a great deal of thanks for the vast knowledge they shared with us.]