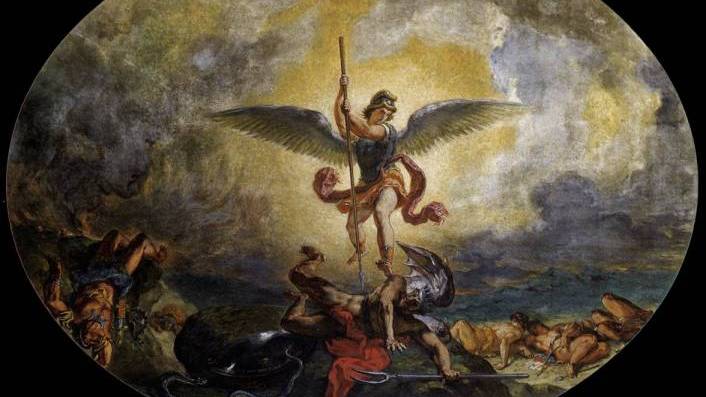 St Michael defeats the Devil by Eugène Delacroix, Church of Saint-Sulpice, Paris. Source: Wikimedia Commons
So far we've looked at what the Scriptures and Tradition tell us about the figure called "the devil". First, we looked at what the Church teaches based on the Old Testament, and last week we looked at what the New Testament tells us about the “prince of darkness.” It may be interesting to note that there is a fascination with the topic, at least in popular culture. There are so many films and TV shows that have been made about Satan, the Devil, Lucifer, about evil, the number of the beast: 666, paranormal activity, about exorcisms and anything supernatural. (See "Top 37 Classiest Satans in Films or TV Shows" if you need a quick refresher.) However, I remember watching the film The Exorcist and thinking that the whole scenario didn’t seem very real. I don't think demons are hiding behind a tree waiting for some poor little girl to go by so they can jump out of the bushes and possess her. I think that people have to cooperate with evil.

You have to be really far away from God for the devil to be able to attack you like that.

According to Matt Baglio,* author of The Rite (which inspired the Anthony Hopkins film of the same name), possession is the result of a person moving far away from God. He says that over a period of time, if you move far enough away, you make it possible for demons to step in. It’s not hard to move away from God. We may think that we are “religious”, but if in our actions and deep beliefs we refuse to give up control of any aspect of our lives to God or have a continued pattern of sin, no matter how small (and remember sin is merely saying no to God), we are, in effect, moving away from God. We don’t have to specifically dedicate ourselves to evil or play with Ouija Boards to invite the devil in. However, says Baglio, if you’ve already begun distancing yourself from God, then playing with the occult will make possession or torments easier.

In short, the person has to "cooperate" with evil for a possession to take place.

I remember the first time I baptized a child, I noticed that one of the prayers during the Rite of Baptism is called “Prayer of Exorcism.” This, of course, does not mean that we believe the child is possessed, but it does means that we acknowledge that there is evil in the world. During that prayer, the priest or deacon commands any impure spirits who might be present to depart from the person to be baptized. Also, remember that Baptism removes our original sin (for more on Baptism read, Deacon-structing Baptism Part 1?) and in this prayer we ask that original sin be removed:

“Almighty and ever-living God, you sent your only Son into the world to cast out the power of Satan, spirit of evil, to rescue man from the kingdom of darkness, and bring him into the splendour of your kingdom of light. We pray for this child: set him/her free from original sin, make him/her a temple of your glory, and send your Holy Spirit to dwell with him/her. We ask this through Christ our Lord.”

So, obviously, the Church believes that the existence of the Satan is real. And if you still have doubts, I’m sure you’ve been around some time when you’ve had to make a “question-and-answer” style Profession of Faith, or Renewal of Baptismal Promises (it happens during the Rite of Baptism and during Confirmation – if you’ve been to an Easter Vigil you’ve done it). Before we profess our Faith, the first three questions the priest asks are “Do you reject Satan, and all his works, and all his empty promises?” (And the correct answer is “I do”, in case you’re wondering.) Not only does the Church teach that Satan is real, but we believe in demonic possession. In fact, the Catholic Church is the only Christian denomination that has prayers or rituals that have to do with expelling demons. I don’t know how common exorcisms are, but I’ve read that one in 5000 cases of reported demonic possession are actually cases of real possession. The Catechism of the Catholic Church defines an exorcism:

"When the Church asks publicly and authoritatively in the name of Jesus Christ that a person or object be protected against the power of the Evil One and withdrawn from his dominion, it is called exorcism. Jesus performed exorcisms (Mk 1:25-26) and from him the Church has received the power and office of exorcising (Mk 3:15; 6:7, 13; 16:17). In a simple form, exorcism is performed at the celebration of Baptism. The solemn exorcism, called 'a major exorcism,' can be performed only by a priest and with the permission of the bishop. The priest must proceed with prudence, strictly observing the rules established by the Church. Exorcism is directed at the expulsion of demons or to the liberation from demonic possession through the spiritual authority which Jesus entrusted to his Church. Illness, especially psychological illness, is a very different matter: treating this is the concern of medical science. Therefore, before an exorcism is performed, it is important to ascertain that one is dealing with the presence of the Evil One, and not an illness (cf. Code of Canon Law, can. 1172)." (CCC 1673)

In 1998, the 1614 Catholic Rite of Exorcism was updated and now includes a stipulation that no exorcism is to be performed until all other avenues have been exhausted. We have to be careful that we’re not dealing with a mental illness or some other psychological problem. That means that doctors, psychiatrists, and psychologists must be consulted first in order to eliminate all medical causes before an exorcism can be considered. One of the first books I read that had anything to do with exorcisms was M. Scott Peck’s People of the Lie. Peck was a psychiatrist who became a Christian after he could not medically nor scientifically explain some of his patients' behaviours or symptoms. In fact, Scott Peck diagnosed some of his patients with "demonic possession". (Another good book by Scott Peck on this topic is Glimpses of the Devil.) The Roman Ritual of Exorcism lists the criteria for determining whether someone is possessed and requires an exorcism:

"Speaking many words in unknown languages or understanding them; revealing distant or hidden things; displaying strength beyond one's condition, together with a vehement aversion to God, Our Lady, the saints, the cross and sacred images."

Every diocese must have an official exorcist. However, in most cases this is the bishop himself. The bishop can also appoint a priest as the diocesan exorcist. It’s easy to get caught up with the drama of possession or exorcisms; however, the real danger of evil is not demonic possession, but rather in being deceived. Remember, Satan is a liar and deceiver. Possession is too obvious. Satan wants to work undetected and is trying really hard to make people believe he is not real. That is probably one of his biggest triumphs.

Remember he is a liar.

He also likes to confuse, like making you think that something is good when in fact it isn't. A good example of this is making you think that it's OK not to go to Mass because you need to spend time with your family - and God is really a loving and merciful God who wants you to spend time with your family (which is true and a good thing) and He doesn't really care if you go to Mass or not (which is not true) - when in fact, going to Mass is very important. (The devil is good at half-truths: things that sound true or are partly true but are not completely true, in order to confuse. That's how he dealt with Eve in the Garden in Genesis 3.) In short, Satan always wants us to pick something good at the expense of what God has promised… which is always something better (not always easier, but always much better). When thinking about evil we must remember the fact that Jesus' death defeated Satan forever. You may wonder why he is still around. Maybe we are living what the Book of Revelation says about Satan being allowed to deceive the nations for a little while (Rev 20:7-8). Scott Peck liked to say that the devil has been defeated; we’re just in the clean-up operation. I don't know if Satan is on the run. It doesn’t matter. As long as there is God, people can choose “not God”. As long as there is Goodness, Truth, and Beauty, people can choose the opposite of those. There is light, but we can always choose the darkness.

And sometimes we end up choosing the darkness without really knowing what we are doing.

That’s why Pope John Paul II asked us to add the Prayer to St. Michael** to our daily prayers:

St. Michael the Archangel, defend us in battle. Be our protection against the wickedness and snares of the devil. May God rebuke him, we humbly pray, and do thou, O Prince of the Heavenly Hosts, by the power of God, cast into hell Satan and all evil spirits who wander through the world seeking the ruin of souls.

All of us can choose God or choose the absence of God, which is evil.  If we choose God, Satan has no real power over us. It is a battle, but in this battle, God is on our side. _ *For more on Matt Baglio, read about and watch his interview with Kris Dmytrenko. You can also listen to my interview with him on the October 18, 2014, edition of the SLHour. **Cardinal Thomas Collins of the Archdiocese of Toronto, where I live, has asked that we say the Prayer to St. Michael (who is the patron of the archdiocese) after every Mass in this archdiocese.