I was struck this past June when I read the Instrumentum Laboris, or working document for the 3rd Extraordinary General Assembly of the Synod of Bishops, which will take place from Oct 5-19, 2014. The Synod, or meeting of Bishops, will focus on “pastoral challenges to the family in the context of evangelisation” which is why everyone refers to it as the “Synod on the Family”. About 100 participants, including the presidents of all Episcopal Conferences, will attend the extraordinary synod. There actually will be two Synods: After the “extraordinary” or “preparatory” one this year, there will be an “Ordinary” General Assembly October 4-25, 2015. The goal of this year's Synod is to set the agenda for the big synod of 2015. The theme for next year’s synod is “Jesus Christ reveals the mystery and vocation of the family”. This second synod, will also include experts and above all else, families. The working document the synods was put together by the General Secretariat of the Synod of Bishops and, for the first time, came as a result of a questionnaire that was released in Nov 2013, as part of the preparatory document, which included 38 questions on various topics ranging from the Church’s teachings on family, natural law, and pastoral care to difficult marital situations, unions of persons of the same sex and irregular marriages. The intent of the questionnaire was to get grassroots feedback on these issues and although delivered to local bishops, religious congregations and Catholic groups, many bishops, as in the diocese of Austin decided to post the questions online in order to receive feedback from their faithful. The result is the above-mentioned Instrumentum Laboris, a fairly complete document that is divided in three parts: This document will provide a guide for the conversations that will be taking place during the synod this October. What struck me was in the first section, chapter 3: The Gospel of the Family and the Natural Law. I was amazed by what I read, constructed presumably based on the feedback received from the questionnaire. The section begins:

“Speaking of the acceptance of the Church’s teaching on marriage and the family necessarily involves the subject of the natural law, which is often quoted in the Church’s magisterial documents and poses difficulties today.” (20)

The next paragraph reads:

“In a vast majority of responses and observations, the concept of natural law today turns out to be, in different cultural contexts, highly problematic, if not completely incomprehensible. The expression is understood in a variety of ways, or simply not understood at all.” (21)

“The responses and observations also show that the adjective “natural” often is understood by people as meaning “spontaneous” or “what comes naturally.” Today, people tend to place a high value on personal feelings and emotions, aspects which appear “genuine” and “fundamental” and, therefore, to be followed “simply according to one’s nature.”

“…the natural law is perceived as an outdated legacy. Today, in not only the West but increasingly every part of the world, scientific research poses a serious challenge to the concept of nature. Evolution, biology and neuroscience, when confronted with the traditional idea of the natural law, conclude that it is not “scientific.” (22)

“If some responses refer to a lack of proper understanding of the natural law, several Episcopal conferences in Africa, Oceania and East Asia, mention that, in some regions, polygamy is to be considered “natural,” as well as a husband’s divorcing his wife because she is unable to bear children — and, in some cases, unable to bear sons. In other words, from an emerging point of view, drawn from a widely diffused culture, the natural law is no longer to be considered as applicable to everyone, since people mistakenly come to the conclusion that a unique system of reference does not exist.” (25)

“The demise of the concept of the natural law tends to eliminate the interconnection of love, sexuality and fertility, which is understood to be the essence of marriage. Consequently, many aspects of the Church’s sexual morality are not understood today. This is also a result of a certain criticism of the natural law, even by a number of theologians. “(26) and “Other complaints against the natural law come from the poorest areas and those least influenced by western thought — especially some African states — which cite the phenomena of machismo, polygamy, marriages between teens and preteens, and divorce in cases of sterility or a lack of a male heir, as well as incest and other aberrant practices.” (27)

It was a surprise to me that when speaking about natural law, there is so much confusion. When the idea of natural law was explained to me, it was very clear and I understood it as a very practical, concrete concept. But maybe I’m in the minority. Before I continue, let me ask you: What do you think natural law is? Are you also confused by what the Church means by Natural Law? The last paragraph of this section offers some suggestions. It is titled: “A Call for a Renewal in Terms of Language” It reads:

“The language traditionally used in explaining the term “natural law” should be improved so that the values of the Gospel can be communicated to people today in a more intelligible manner. In particular, the vast majority of responses and an even greater part of the observations request that more emphasis be placed on the role of the Word of God as a privileged instrument in the conception of married life and the family, and recommend greater reference to the Bible, its language and narratives. In this regard, respondents propose bringing the issue to public discussion and developing the idea of biblical inspiration and the “order in creation,” which could permit a re-reading of the concept of the natural law in a more meaningful manner in today’s world (cf. the idea of the law written in the human heart in Rm 1:19-21; 2:14-15). Moreover, this proposal insists on using language which is accessible to all, such as the language of symbols utilized during the liturgy. The recommendation was also made to engage young people directly in these matters.” (30)

This paragraph also surprised me. I would not propose that the language is renewed, but merely that we learn to explain the term better (maybe that’s the same thing). And the idea of placing more emphasis on the Word of God is very sensible, but not exclusive to natural law. The way natural law was explained to me, it aligns perfectly with what is found in Scriptures. Last July I attended a series of lectures in Toronto, Faith in the Public Square. While none of the topics had to do with family or sexual morality specifically, I was amazed that the first two speakers, Dale Ahlquist and Archbishop Charles Chaput of Philadelphia mentioned natural law. But each defined it in a fairly different way. Dale Ahlquist said that natural law was common sense. Archbishop Chaput said that it’s in your heart. I have difficulty with both those explanations. I heard this having just read the Synod’s working document. I had also just interviewed Philosophy Professor, John Hittinger at the University of St. Thomas in Houston, for our documentary series, Creation. In my conversation with Prof. Hittinger the topic of natural law came up. He said that according to St. Thomas Aquinas (who came up with the term “natural law”) "natural law is precisely the participation of rational creatures in eternal law." Prof Hittinger continued by saying that “Thomas contrasted humans with other animals whom he said, "Obey eternal law by an impressed instinct or law, by which they behave according to this pattern for the good, but they don't stop and reflect on the good. Human beings have conscience. We must stop and ask, "Is this good? Or will it catch up with us if we do evil?" This is why the two definitions I mentioned above, I think, fall short. We have conscience. We think about these things. We rationalize. So the perception of what’s “in my heart” can be very different than what’s in your heart or what’s common sense for me may be very different from what’s common sense for you or for someone living in a polygamous relationship in Africa. No wonder people don’t understand natural law and have a difficulty making sense of it. But natural law is commonly used to explain morality. Can we explain morality without using the natural law argument? I think we must. I’d like to propose a different way of looking at natural law. I learned this from Prof. Janet Smith in her famous talk “Contraception: Why Not”. I use this explanation of natural law every time I do a marriage prep class on sexuality. I use it every time I need to explain sexual morality of Catholic teachings on sexuality, marriage and relationships. I have also used it to explain any moral teaching of the Church. No one has ever told me that it’s not clear. In fact, every time, everyone nods as if this was the most basic obvious thing in the world. Join me next week as we look at a real practical way to explain natural law. On a separate note, a Day of Prayer for the Synod was held today Sunday September 28 in the Salus Populi Romanii Chapel in the Basilica of St. Mary Major in Rome. Perhaps you can say a little prayer today and every day from Oct 5-19th for the success of this Synod. 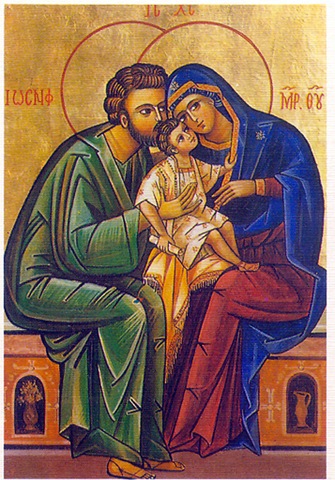