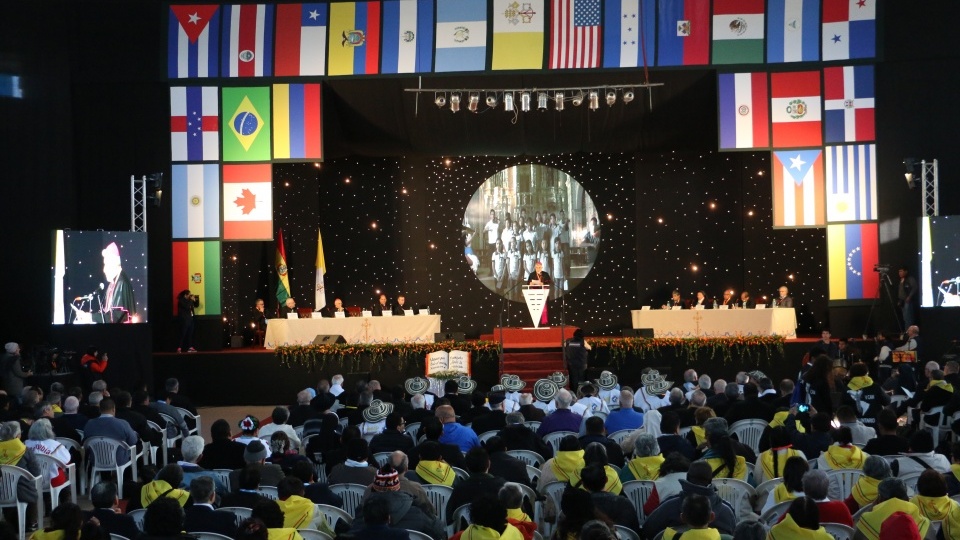 As I reflected on what I would first share about my time at the 5th Missionary Congress of the Americas that took place in Santa Cruz de la Sierra in Bolivia last week, I never thought that I would be speaking about social justice. You see, I don't usually think about social justice when thinking about mission. But I guess it makes sense, doesn't it? When I think of missions and missionaries, I think mostly of those who travel far in order to evangelize. I think of those who go and care for the poor and the sick. I think of building schools and digging wells. A missionary is someone like Mother Teresa. When I think of Catholics who struggled against social injustice, I think of Monseñor Romero.

But I don't think of Romero as a missionary.

We also found out that most from Haiti also could not come because of their financial situation and the visas that would be required for them to get here. And so, all 24 National Directors decided to draft a proclamation - a statement to express solidarity with those groups and all who suffer. The proclamation was read to all delegates on Thursday. When asked who would support such a statement, 2500 hands shot up. This became a proclamation of the whole Church of the Americas. The statement reads (translation from Spanish my own):

“When a people suffers, the whole Body suffers”

Gathered at the 5th Missionary Congress of the Americas, in the city of Santa Cruz de la Sierra in Bolivia, under the theme, “America on a mission; the Gospel is joy”, we hear the cry of the most vulnerable in our continent. We are moved to the extreme by the pain caused by the violence, persecution, and exploitation that cuts down our brothers and sisters. During these days of prayer, reflection, and celebrating our Faith, we make our own, the pain of each brother and sister; we express our solidarity with and proximity to the families and communities that mourn their dead; and we pray to our Heavenly Father to grant them consolation and strength in the Faith. America on a mission; the Gospel is joy; joy and justice; joy and truth; joy and respect for the rights of all. In the name of Jesus, we reject all violent action and we make a radical call to those responsible, especially to those who govern each nation, to commit themselves to living and proposing an authentic culture of defending and promoting life and the common good, truth, justice, and peace. Today, more than ever, we understand that the mission of the Church has to walk in the ways of encounter, of listening, of dialogue, of forgiveness and reconciliation. We invite especially all communicators to be protagonists of the deep transformation of hearts, as they are bearers of the truth that is integrally found in facts. At this time, we hurt for Venezuela, we hurt for Nicaragua, we hurt for Haiti, and we hurt for the deaths in Honduras caused by gang violence. We hurt because of the situation of migrants who, looking for safety and security, end up experiencing the absurd and unjust separation of families at the borders of countries like the United States and Mexico. Among other situations that we recognize as painful and sad, we hurt because of the indifference and the silence that result in the condemnation of those who are most poor and defenseless in each of our nations. Brother and sister delegates; brothers and sisters of all the Churches of the Americas; “Blessed are those who work for peace, for they shall be called children of God.” May prayer, forgiveness, and sincere friendship strengthen our common vocation with all men and women of good will, to be builders of peace, proclaiming with courage and coherence life, truth, and justice, which are the rights of all human beings. Our Lady of Guadalupe, Mother of all the people of the Americas, at your feet we place our sincere commitment in this heartbreaking search for peace. Pray for us to your Son, our Lord, who by his death and resurrection, triumphs over death and sin in order to grant us the fullness of Life.

It was presented by Fr. Leonardo Rodriguez, National Director for the Pontifical Mission Societies of Uruguay. Afterwards I asked him what the point was.

He said that the first purpose was us.

We are the purpose. Because these situations create in us a lot of fear and a feeling of impotence: "What can I do?" He said that, though it may sound naive, we must not forget the power of prayer. We can pray. That is in our power. We are a priestly people. We have the responsibility to carry on our shoulders the burden of the other and to bring those burdens before God. We may never be in Venezuela or in Nicaragua, or in other places where there are struggles, but we must —and this is a conversion— make those situations our own. Like Moses whose raised arms sustained the Israelites in battle, we too can sustain the other in their struggles. Fr. Leonardo told me that the Directors asked themselves the same question. What's the point in making this pronouncement if we do not have political power to make a change? We may not even have the ability to make those who can make a change listen. But we are the people. The Church is the people, and we cannot stay silent. We are not inciting a revolt or a protest. Instead, we are inviting all, in a personal, private, and communal way to recognize that the pain of the other is also our pain. This should, first of all, make us pray. Second, it should also make us ask, "How does the other's pain transform me?" Then, even though it may make us feel afraid and impotent, we must let that question prick our hearts. A missionary is one who listens and who befriends. We must listen to those who suffer, but that's not enough; we must also befriend them. We must be friends to their suffering. We may not be able to take away their suffering, but we can suffer with them. A tough lesson but one that will bring us (and those who are suffering) joy. - Photo credit: OPM Canada / José I. Sierra