Deacon-structing Mercy: We are not God 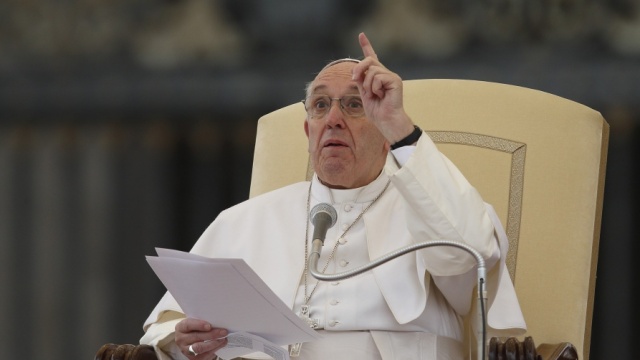 It's always a nice confirmation when the Pope says the same thing you've been trying to say. (Maybe he read my blog from last week?)
Last Wednesday, Pope Francis' General Audience Address was titled, God's Justice is Mercy.
You can listen to the Vatican Radio report here:
In short, Pope Francis is eloquently making the point that I tried to make last week: That Justice demands Mercy.
If you missed the Audience and the report above does not give you the full sense, read this:

"The Sacred Scripture presents God as infinite mercy, but also as perfect justice", How can the two be reconciled? They may appear to be contradictory, but this is not the case, as it is precisely God's mercy that leads us to achieve true justice. In the legal administration of justice, we see that those who consider themselves to have been victims of abuse consult a judge in court and ask that justice be done. It is a retributive justice, inflicting punishment on the guilty, according to the principle that each person receives what he deserves. … But this route does not lead to true justice, as in reality it does not conquer evil, it simply limits it. Instead, only by responding with good can evil truly be conquered".

The Pope explained that the Bible proposes a different form of justice, in which the victim invites the guilty party to convert, helping him to understand the harm he has done and appealing to his conscience. This is the principle behind restorative justice. Many of us have a hard time picturing how this can work since our justice system is, by nature confrontational. But this is not how we solve conflict in the family. This is not how we solve conflict with people who we care about; not when we value the relationship. Pope Francis continued:

"This is the way of resolving conflicts within families, in relations between spouses and between parents and children, in which the injured party loves the guilty and does not wish to lose the bond between them. It is certainly a difficult path: it demands that the victim be disposed to forgive and wishes for the salvation and the good of the perpetrator of the damage. But only in this way can justice triumph, as if the guilty party acknowledges the harm he has done and ceases to do so, the evil no longer exists and the unjust becomes just, as he has been forgiven and helped to find the way of good".

This is the way God administers Justice; so that the unjust become just. How profound! Justice has to be served - that's the natural course when consequences are inevitable. God's perfection demands Justice. But God's Justice is Perfect Justice. It seems to me that Pope Francis is telling us that God's Perfect Justice demands mercy. He also said:

"God does not seek our condemnation, only our salvation. God does not wish to condemn anyone! … The Lord of Mercy wishes to save everyone. … The problem is letting Him enter into our heart. All the words of the prophets are an impassioned and love-filled plea for our conversion".

This is what I am discovering as I begin my reflection on mercy this Jubilee Year. God demands perfection - that's why we have purgatory - we strive to be "perfect as our heavenly Father is perfect". But all we can do is strive. God's perfection demands Justice, but only God can administer perfect Justice, which is why it's not up to us to administer justice. We can't. All we can do is administer forgiveness. You and I are not capable of justice; we are only capable of mercy.
Now, don't get me wrong, I am not saying that we are not capable of being just. God asks us to be just and righteous (I believe we saw that in all the Scripture references from last week). When we act justly (fairly) we are, in fact, acting mercifully.
What we are not capable of doing is administering justice. We tend to think that justice is receiving payment from someone who has trespassed against us. That is not justice, nor are we capable of exercising that kind of "justice". Remember that Justice is the quality of being fair or being reasonable. If we demand justice as receiving payment, we will never be satisfied. This is why people have such a hard time with forgiveness and why, instead Pope Francis is inviting us to consider mercy. This is why God calls us to mercy. Mercy is directly related to forgiveness. This is the kind of Justice that leads to reconciliation and healing. It is the Justice that makes us whole, that makes the unjust just. Pope Francis said:

"God's heart is "the heart of a Father Who loves all His children and wants them to live in goodness and justice, and therefore to live in fullness and happiness. A Father's heart that goes beyond our meagre concept of justice so as to open up to us the immense horizons of His mercy. A Father's heart that does not treat us or repay us according to our sins, as the Psalm says".
"It is precisely a Father's heart that we encounter when we go to the confessional. Perhaps it will tell us something to better understand our evil, but at the confessional we all go in search of a father who will help us change our life; a father who gives us the strength to go on; a father who forgives us in God's name. Therefore, to be a confessor is a great responsibility, as the son or daughter who comes to you seeks only to encounter a father. And you, the priest there in the confessional, are the place where the Father does justice with His mercy."