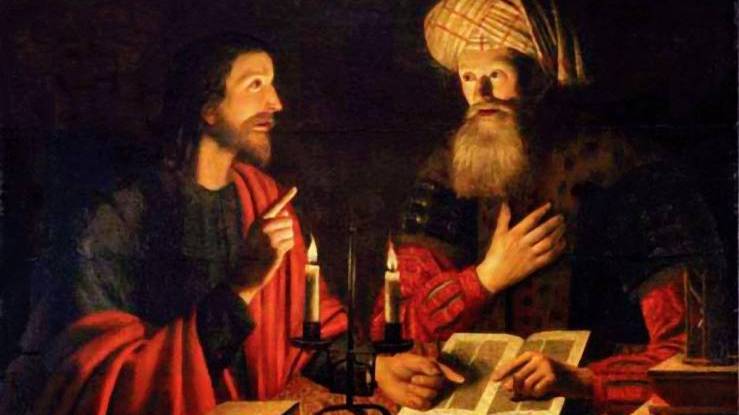 ‘Christ Instructing Nicodemus,’ attributed to Crijn Hendricksz Volmarijn (ca 1604-1645).
A reflection for the 4th Sunday, Lent, Year B. The readings are 2 Chronicles 36:14-17a, 19-23; Psalm: 137, Ephesians 2:4-10 and John 3:14-21. Picture it: Nicodemus was a Pharisee and a religious leader; perhaps a member of the Jewish Council, the Sanhedrin. It’s the Feast of Passover and Jesus is in Jerusalem. All eyes are on Him. Nicodemus is interested in Jesus but he doesn’t want everyone to know, so he goes to Jesus at night, in the cover of darkness. What follows is a well-known exchange that includes a classic device that the Gospel of John uses: Jesus is misunderstood. Jesus tells to Nicodemus that no one can see the Kingdom of God unless they are ‘born from above.’ The word for ‘from above’ in Greek is the same word as ‘again’ so Nicodemus responds, “How can anyone who is born, be born again?” Which leads to Jesus explaining what He actually means and leads us to today’s Gospel.

I am going to propose that what Jesus is actually speaking about is Grace.

Grace is a word that we all use; there are expressions like “by the Grace of God” or “there but for the Grace of God go I” and songs like “Amazing Grace” and even TV shows like “Saving Grace” that deal with the topic of God’s Grace. We can say that Grace is a gift of God, but do we really know what Grace is? Is anything that comes from God, Grace?

Let’s begin by looking at what Grace is not.

The first reading is from the second book of Chronicles. Chronicles are part of the “history books” found in the Old Testament after the Five Books of Moses. They tell the story of the Jewish people from the arrival in the Promised Land, through the story of Kings Saul, David and Solomon, and then all the other kings that followed, leading to the exile to Babylon. Chronicles tells the same story as the books of Kings, but from a slightly different perspective. The “chronicler” makes a point of telling the story as theology and not just as history and in his world-view it’s clear that everything bad that happens to the Jewish people is because they have turned away from the ways of God.

This is not how Grace works.

First of all Grace is not negative. Grace is always positive. God does not punish us. The Catholic Church does not teach that sickness, terrorist attacks or disasters are a punishment from God. These things happen to everyone, whether they follow God’s ways or not. Granted, if we do not follow God’s commands and we are living in sin; we are making bad choices, chances are that will lead to bad things happening. Terrorist attacks happen because people do evil things. We can even say that in some cases, environmental disasters are caused by poor choices that humans have made with regards to how we steward God’s creation.

Bad things happen, but they are not God’s punishment.

The way Grace works is illustrated by St. Paul in the second reading. This is also a well-known passage. If any of you have Evangelical friends you may have heard them tell you that some of them believe that we are “saved by faith alone.” They believe that in order to be saved, all we need to do is have faith: Believe in Jesus Christ and accept him as your personal Saviour. They refer to all the other things Catholic do - the ritual and the devotions - that they say are not necessary, because all you need is faith. They will say that this is in Scripture. But if anyone ever says that to you, please ask them where in the Bible that is, because it isn’t. What Paul says is not that we are “saved by faith alone.” He says that “by Grace we have been saved.”

It is God’s Grace that saves us.

We are saved because God is love and He is good and He wants to save us. That’s Grace. But it’s not just “by Grace”. St. Paul says that “by Grace you have been saved through faith.” So we are saved because God is good but we have to accept it. We have to believe it. And we have to respond to it. When Pope Francis said a few years ago that 'everyone had been redeemed by Jesus Christ, even Hitler', he was correct. Everyone has access to salvation in Jesus Christ. But that doesn’t mean that everyone is saved. We have to accept that salvation, believe in it and respond to it. The Catholic Church says that we have to “cooperate with Grace” (look at Thomas Aquinas on ‘Operating Grace’ and ‘Cooperating Grace’. ) This is what I think Jesus is telling Nicodemus. He says to him that everyone who believes in the “Son of Man” will have eternal life. Then he says one of the most well-known bible verses of all time: John 3:16

“For God so loved the world that He gave his only-begotten Son, so that everyone who believes in him may not perish but may have eternal life.”

This is another verse quoted by evangelicals when they say that all we have to do is believe in Jesus Christ in order to be saved. But Jesus doesn’t stop there. Yes, we are saved because God “so loved the world” and “everyone” who believes will be saved but how do we know? Jesus says, “this is the verdict” (or “this is the judgement:”). It means, ‘this is the proof’.

How will we know? By our works.

We accept, believe and respond to God’s Grace.

I didn’t really understand Grace until a few years ago I was helping at a Vacation Bible School. The theme that year was Grace. There was a little song that we learned, “Hello, my name is Grace. I’m a present just for you” (Grace is a free gift, because God is good). “I am here to remind you that God loves you.” Then it said, “I’m a little piece of God inside you.” That’s Grace. Not just any gift from God, but the gift of God’s very self, his very life inside us. We all have God inside of us. We receive Grace through the Sacraments, but also every time you do works that belong to the light.

We need this battery to give us life and every once in a while it needs to be recharged. We recharge it by doing good and pious works: prayer, fasting, almsgiving – through the Sacraments and all the good things that we do that bring us into Communion with God and others. But unlike a battery that no matter how many times you charge it, it stays the same size, every time we re-charge with God’s Grace, the Grace within us increases in size and the life of God inside us gets bigger and bigger.

We can absolutely cooperate with Grace!

Today and this Lenten season, as we receive the Eucharist, go to Confession and do works of Light, let’s focus on asking God for his life, for his Grace, that we will no longer come to him as children of darkness, but as children of light!