In case you've just stumbled upon this article because you're curious about the female diaconate, you may want to backup and start where we started a couple of weeks ago: We began first by addressing the event that brought about this whole conversation and then in two parts (part 1 and part 2), briefly, the meaning of the Sacrament of Holy Orders, for I don’t think you can separate the conversation about Church hierarchy outside of the conversation about Ordination.  We then looked at the meaning of the diaconate in part 1 and part 2, before looking at the history and tradition of women deacons. Before continuing, let me add that for a different perspectives on the same topic, you should read Sebastian Gomes' Women deacons: Phyllis Zagano on the current debate and the papal commission and watch the two interviews with the leading scholar on the female diaconate, Phyllis Zagano: Subject Matters and Witness with Fr. Rosica

Last week we saw that there is a vast tradition of the female diaconate in both the Eastern and the Western Church. Proponents of the female diaconate say that perhaps the most famous “woman deacon” in the Western Church was St. Radegund, wife of King Clothar I (511-58). Though married, she seemed to have lived a celibate life and served the poor. One night she left her husband and demanded to be consecrated by St. Medard, the bishop. The bishop did. However, it’s hard not to read the description/poem of that event by bishop Venantius Fortunatus without concluding that she was being consecrated into a monastery. At the end of paragraph 12 it says that Medard laid his hands on her and consecrated her as a deaconess, but all throughout, she is referred to as a “monacha”, which is a nun. And she is given a monastic garb. 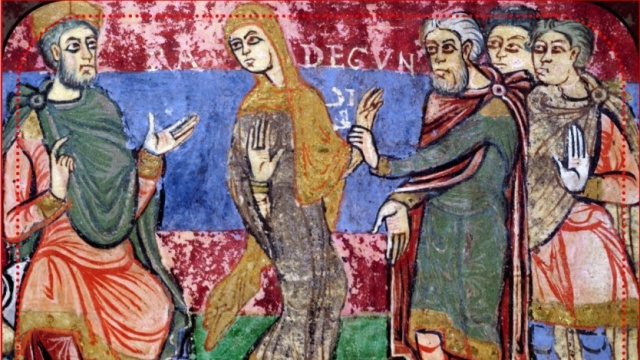 St Radegund Led before Clothair I. Miniature from the Life of St Radegund. 11th century. Bibliotheque Municipale, Poitiers, France.
There are other references, such as three letters by Pope Gregory II who wrote to “women deacons of St. Eustachius” and also to “Matrona, a religious woman deacon, and her sons and nephews.” There is also Sergius, Archbishop of Ravenna, who in 753 “consecrated his wife Euphemia, a “diaconissa” and other references forbidding the marriage of women deacons by Pope Leo VII (c.937) and during the Council of Rome (826). There are references to the Rites of Ordination for women deacons in the Eastern Church. There are also references in the Western Church, dating as far back as the 8th century. The 9th century Gregorian sacramentary includes a prayer for the making of a female deacon and in the 10th century Romano-Germanic Pontifical there is a complete liturgy for both the ordination of a woman deacon and a male deacon. It refers to the women as “deaconess.” An almost identical liturgy appears in the 12th century Roman Pontifical, but without instructions so it’s not clear if it was used to ordain women. By the 13th century this rite had completely disappeared.

Where does this leave us?

History records both women called “deacons” and women called “deaconesses”. Some women called “deaconess” were married to men deacons. Some were called “deaconess” merely as a description of the work they were doing. There is a tradition in both the Eastern and Western Church of bishops formally appointing women to perform a type of diaconal (service/charity) ministry. Is it possible that “deaconesses” became what today are women religious and nuns? It’s clear that in the early Church women were required to serve certain functions that men could not serve – as in baptizing other women (remember people were baptized naked or with little clothing). Even entering the house of a woman may have not been proper for a man. Anyone instructing women in the faith had to have been a woman. These are the particular functions that is given to deaconesses in the 16th chapter of the Didascalia Apostolorum that I mentioned last week. Written in the second century, it is likely the earliest and most specific document that refers to deaconsesses. It says that "let a woman rather be devoted to the ministry of women, and a male deacon to the ministry of men." We see this even up until almost the end of the 1st millennium: Ninth century canonical commentaries describe women deacons as “ordained by the imposition of hands by the bishop... in order to instruct all Christian women in the faith and law of God as they did in the old Law.” This is likely what the functions of these women were. But, were these women involved in the governance of the Church? Were they allowed to preach in Liturgy? Did they even have a liturgical function at all? No one really knows. The Didascalia is a bit confusing on this point, since, even though it refers to deaconesses for the functions described above, in other sections, it calls upon "bishops and deacons" (not deaconesses) for other functions, even vising the sick and caring for the widows and the orphans and specifically mentions the duties of deacons (not deaconesses) during their assemblies.

Not just a Pope Francis thing.

The truth is that the theology of the diaconate is still under-developed.

This has been a little scattered, but I hope that it gives you an idea of why many will say when we speak of women deacons or deaconesses in the tradition of the Church, we just don’t know. They existed, yes. But what were they? Were “women deacons” the same as “deaconesses” (a minor order separate from the order of deacons)? Were they merely wives to deacons? Were women deacons widows or consecrated singles? Could they be married or only married if married to a deacon? Sure there were women in the Church that were appointed to the work of caring for the sick and the poor (which is very much diaconal service). That sounds like women religious to me.There were women deacons, but were they ordained in the sense that we understand “ordination” today? I have to say that, while I find difficulties with this conversation (mainly because of the issue of ordination), in the last weeks that I’ve been researching this, I have grown more and more open to the idea that there is a bigger distinction between a deacon and a priest that I thought. Perhaps some of you brother deacons can help me with this. What I've always known however, is that the Church can have diaconal-type ministers that are installed to do certain things, preach even (we call them Lectors, actually), or lead certain type liturgies (which again, already exists – lots of women lead para-liturgies every day) and do those things that women in the Church already do, like take Communion to the sick. But I do not think that the real problem would be addressed by ordaining women to the diaconate. The question has to do with giving women leadership roles in the Church. And so, can the Vicar or Chancellor of a Diocese be a woman? Can the head of a Marriage Tribunal be a woman? How about the Rector of a Seminary? Can the president of a pontifical council be a woman? Can a parish administrator be a woman or the Chancellor of a Diocese? To all of the above, absolutely yes. Maybe what we need is less clericalism. Next week let's remember WYD2002 and for more WYD, read, deacon-structing World Youth Day.