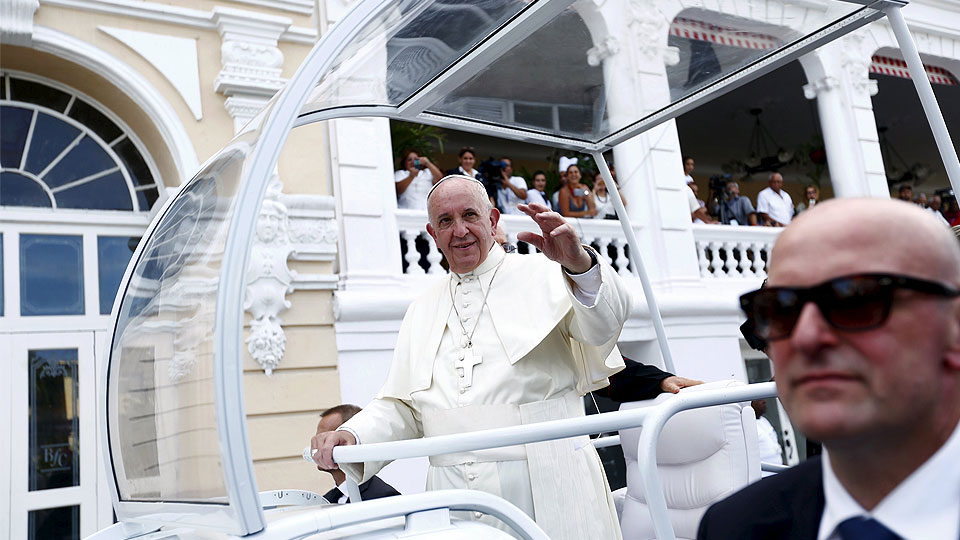 CNS photo/Edgard Garrido, Reuters
A year has passed since Pope Francis trip to Cuba and the United States. In the 4 days spent on the island, the pontiff visited several cities: Havana, Holguin and Santiago, leaving a message of hope everywhere. The contribution the Holy Father made to the re-establishment of relations between Cuba and the United States after 50 years is undeniable, thanks to the commitment of many figures including Archbishop Becciu, substitute for General Affairs to the Secretary of State, and Cardinal Jaime Ortega, Archbishop of Havana. With the help of several interpreters, the two countries are now ready to write a new page in their history and for their relationships. The US President admitted his guilt regarding relations with Cuba. Raul Castro did not close the door. Pope Francis has followed the case closely, with the hope that everything would go in the right direction. In Holguin, during his second day in Cuba, the Pope encouraged Cubans to live as a community, to care for one another, in a clear message at the Raul and Fidel Castro province of origin. The Pope held a private meeting with the Lider Maximo. The two figures were so distant and at the same time so close, not simply because of their Jesuit education but, above everything else, because they always put at the center of their lives crucial attention for the poor and for social justice. In the Pope's visit to Cuba, the Church benefited from being seen as a social factor of integration, as a backbone of patriotic values rooted in the Catholic faith, for it strives to be the "voice of the voiceless." At the same time, the average believer, of any faith, felt the desire to get rid of all the fears that weighed on religious expression for so long. The subsequent departure of the Pope to the United States created an additional and ideal bond between the two countries, but above all confirmed the will of Pope Francis to give a new impetus to certain relationships following his principle to build bridges and not barriers. Cuba, in this way, became the stage a few months later for another type of rapprochement. Pope Francis, when en route to Mexico, stopped in Havana to meet with the Patriarch of Moscow Kirill I, an event long anticipated since the great schism of 1054 between the Church of the West and of the East. "Finally! We are brothers" the pontiff exclaimed at the end of the meeting. It was a historical moment, which took place in Cuba, the new land of dialogue and reconciliation for the Church and beyond.