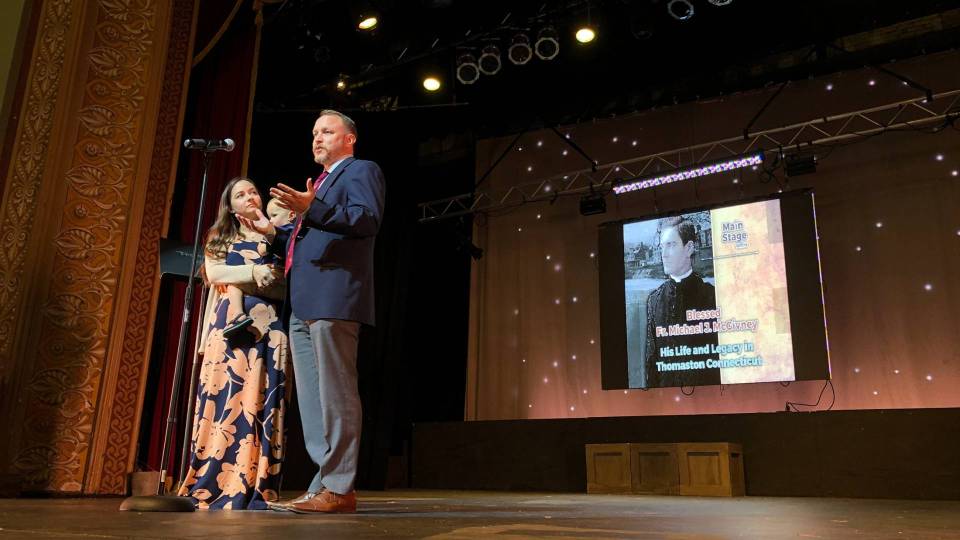 Megan and Joseph Hermosillo address a group of pilgrims at the Thomaston Opera House in Connecticut Aug. 13, 2022, during the daylong "In the Footsteps of Blessed Michael McGivney" pilgrimage. The couple said Joseph was saved from a life-threatening case of COVID-19 through their prayers to Blessed Michael McGivney and his intercession. (CNS photo/Andrew Fowler)
THOMASTON, Conn. (CNS) -- It's miraculous Joseph and Megan Hermosillo were able to walk across the Thomaston Opera House stage together Aug. 13. Along with their six children, ages 2-12, the couple from Frederick, Maryland, was invited to provide testimony for pilgrims following "In the Footsteps of Blessed Michael McGivney," a tour sponsored by the Blessed Michael McGivney Pilgrimage Center of the Knights of Columbus in New Haven Fifty pilgrims -- who included religious, families, like the Hermosillos, and others -- visited sites of significance in the life and spiritual formation of Blessed McGivney in Waterbury and Thomaston on his feast day. The Maryland couple shared a favor they said was granted by the intercession of Blessed McGivney. They spoke from the opera house stage, the same stage graced more than a century ago by the priest to perform theater productions such as the Irish folk play "Handy Andy." Days before the new year, Joseph had tested positive for COVID-19. Six days later, he began to feel fatigued and discovered his oxygen levels plummeted. He was hospitalized Jan. 8 and placed on a ventilator. "It was mild at first and then all of sudden, I had lung failure, what they called acute respiratory failure," he told Catholic News Service. "My body was shutting down and my lungs were compromised." His condition worsened to the point where doctors told Megan that her husband required an echo-machine to assist his blood flow. "I was numb," she said. "It was life-changing news, and two days earlier I thought he would be fine." In search of a miracle, Megan sought spiritual guidance from Father Timothy Grassi -- pastor at St. James the Greater Parish in Charles Town, West Virginia -- for an intercessor. The family hoped to pray for the help from a blessed. At first, they considered Archbishop Fulton J. Sheen, Blessed Solanus Casey among others. But when Father Grassi weighed the options, he suggested Blessed McGivney. Prior to that day, the sainthood candidate had not been on Megan's radar. "He said, 'Father McGivney founded the Knights of Columbus to help families in distress, particularly families without a father in the home. You're missing the father in your home. Let's ask him to reunite your family and heal your husband,'" Megan told Catholic News Service. Megan and the family trusted Father Grassi's suggestion, sending the Prayer for the Canonization of Blessed Michael McGivney and an intercessory prayer to friends, parishioners at St. James the Greater, and others they knew. That same day, Joseph was scheduled to be transported to another hospital in Baltimore; however, coincidentally, his oxygen levels doubled. For Megan, it was a sign the prayers were being answered. "We took that as our battle call. Our priest was our general, this was a spiritual battle," she said. A few days later, Joseph's sister, Teresa, took the initiative to make a pilgrimage to Father McGivney's tomb, located in St. Mary's Church in New Haven. Concurrently, the Hermosillos called the Blessed Michael McGivney Pilgrimage Center requesting a relic to be venerated as part of the prayer campaign for Joseph's healing. With assistance from Peter Sonski, the education outreach director at the pilgrimage center, and Brian Caulfield, a vice postulator of Father McGivney's cause for sainthood, a relic was eventually transported to the hospital in Maryland. Before then, Joseph's memory throughout his struggle with COVID-19 was hazy, ebbing in and out of consciousness. However, he clearly remembers the image of Father Grassi praying over him with the relic on Jan. 20. The moment filled him with not only hope, but trust he would be all right. "I remember seeing the picture of Father McGivney," Joseph said. "When you give that trust over, it brings you that calmness." He added, "Out of all the saints, they brought in somebody who has the tools, who has the subject matter and expertise that I needed." Four days after he was blessed, Joseph was removed from the ventilator, making incremental improvements until he was deemed stable enough to be discharged. In total, he spent 32 days in the hospital. Today, he has made a full recovery. Since then, the Hermosillos made a pilgrimage to New Haven in June and have shared their story of healing, recognizing the newfound grace they've received. Joseph also joined the Knights of Columbus St. Teresa of Calcutta Council 12036 in Charles Town. The family also learned of others returning to the church and Mass as a result of the campaign, and that faithful across the country, Canada and even Italy were praying for his recovery. In all, the answered favor has been a humbling experience. "It's surreal to come through that," Joseph reflected. "We realize it wasn't necessarily for us, it wasn't solely for us. So many people have found blessing and connection to our story."