Countdown to Dublin: Our Lady of Knock 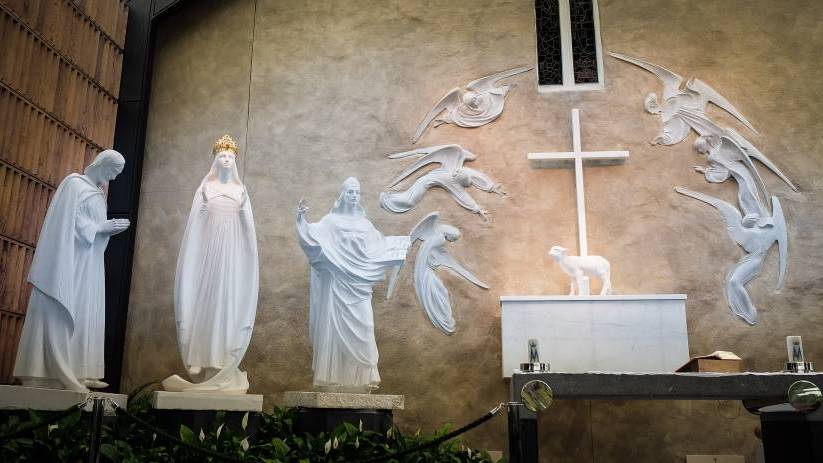 One rainy day in Ireland

It was an ordinary Thursday evening in 1879 in the village of Knock in the northwest of Ireland. Mary McLoughlin, housekeeper to the parish priest, went out to visit a neighbour, a widow by the name of Margaret Byrne. As she passed by the chapel, she noticed some figures against the south wall that she had never seen before: they appeared to be the Blessed Virgin Mary, St. Joseph, and a bishop. There was an altar, too, and all were surrounded by a bright light. It seemed rather strange, but Mary assumed that the priest had received some new statues from Dublin and had left them outside. She thought no more of them and continued on her way. After a brief visit with the Byrnes, Mary returned home around 8 o’clock in the evening, accompanied by Margaret’s daughter, Mary Byrne. The sun had set, it was getting dark, and it was raining. As the two Marys approached the chapel, they saw the light and the figures and recognized that they were seeing a heavenly apparition. Against the south wall of the chapel, three figures stood, suspended about two feet off the ground. All were clothed in white. The Virgin Mary stood in the centre, a crown on her head and her hands and eyes raised in an attitude of prayer. St. Joseph stood with his grey head bowed respectfully toward her. On her other side stood a mitred bishop, identified by Mary Byrne as St. John the Evangelist based on a statue she had seen. A book was in his left hand, and his right hand was raised and pointing with two fingers as though preaching, though none of the figures moved or spoke. Next to them was an unadorned altar and upon the altar a young lamb and a cross.

"I was filled with wonder at the sight I saw."

Mary McLoughlin sent the other Mary to call her family whom they had just left in the house and any other neighbours she could find. In all, 14 people witnessed the vision, which lasted at least until 9:30 pm. One other man saw the bright light at the chapel from a distance. Though the villagers were soaked through, standing as they were in the pouring rain, the chapel wall and the ground around the figures were completely dry. The saintly visitors seemed so real that one of the visionaries, Bridget Trench, attempted to embrace the Virgin’s feet but was perplexed to find nothing solid except the chapel wall. When Mary McLoughlin returned home, she told Archdeacon Cavanagh, the parish priest, what she had seen. He appeared not to take much notice until the next morning when he heard the story repeated by several other of his parishioners. Seven weeks later, Archbishop MacHale of Tuam set up a Commission of Enquiry, and the fifteen witnesses gave their sworn statements, describing what they had seen. And three gave the same testimony again in 1936 at a second commission. Both commissions concluded that the testimony of the witnesses was trustworthy.

A place of pilgrimage

On Sunday, August 26, Pope Francis will join the ranks of millions of pilgrims, including St. Teresa of Kolkata and Pope St. John Paul II, who have visited the shrine in the nearly century and a half since the apparition. Even when train and bus services to Knock were suspended during the Second World War, pilgrims still found a way, coming by foot and bicycle, on horseback, or hitching a ride with delivery vehicles. Times have improved since then, and pilgrims can now arrive, as Pope Francis will, via Knock’s very own airport, which officially opened in 1986.

The airport itself was the fruit of bold faith and perseverance on the part of local parish priest, Monsignor James Horan, who worked tirelessly to promote the shrine and provide for the needs of the many pilgrims. Mgr. Horan’s boldness and the changes brought to Knock over the years are the subject of a rather humorous song by Irish singer-songwriter Christy Moore. But even better than Christy Moore’s song is the real-life Mgr. Horan with his cheerful aplomb and his simple charm. He featured prominently in a 1986 television program about the building of the airport: “A Wing and a Prayer”. Faced with conflicting messages from politicians, he decided to solve the problem by beginning construction and sorting out the politicians later. As heavy machinery move earth in the background, he says to a reporter:

“We're building an airport. And I hope the Department of Transport doesn't hear about it. Now don't tell them ... We have no money, but we're hoping to get it next week, or the week after… I’m not sure whether I have permission or not. I’m going ahead anyhow, just taking a chance.”

And the pilgrims keep coming

People come to Knock for many reasons. Some come out of a devotion to the Blessed Mother. That is what drew St. John Paul II, who made an apostolic visit to Ireland in 1979 expressly for the purpose of celebrating the centenary of the apparition at Knock. He said in his homily that day:

“Every time a pilgrim comes up to what was once an obscure bogside village in County Mayo, every time a man, woman or child comes up to the Old Church with the Apparition Gable or to the new Shrine of Mary Queen of Ireland, it is to renew his or her faith in the salvation that comes through Jesus, who made us all children of God and heirs of the kingdom of heaven. By entrusting yourselves to Mary, you receive Christ. In Mary, ‘the Word was made flesh’; in her the Son of God became man, so that all of us might know how great our human dignity is. Standing on this hallowed ground, we look up to the Mother of God and say ‘Blessed are you among women, and blessed is the fruit of your womb’.”

And he left the people and pilgrims of Knock two gifts: a gold rose and the bestowal of the title of basilica on the grand new church. Some come looking for healing of body, mind, or spirit. In 1879, Archdeacon Cavanagh began a “Diary of Cures,” a record of healings that people experienced after visiting Knock – over six hundred within the first year. Some come out of curiosity. Others come looking for a place of spiritual connection and quiet in the busy, secular world of modern Ireland. Over the last four decades since John Paul II’s visit, the spiritual and social landscape of Ireland has changed dramatically, and the modern Catholic can feel isolated and oppressed. And yet, even as Ireland changes, the Shrine of Our Lady of Knock remains an important pilgrimage site in this country, welcoming over 1 million visitors each year. What they find is a place of peace and prayer that they can take back with them into their daily lives. As one pilgrim recently wrote:

“This visit has renewed and strengthened my faith. I leave, I hope, a better person.”

Want to learn more about apparitions and miracles and how the Church deals with them?

Watch this episode of Subject Matters in which Sebastian Gomes sits down with John Thavis to discuss his excellent 2015 book, The Vatican Prophecies: Investigating Supernatural Signs, Apparitions, and Miracles in the Modern Age.