Christians in Iraq: Fight or Flight versus Love and Conviviality

This blog comes from Rita Sawaya, who was in Rome covering the Synod of Bishops for the Middle East last month.
Fight or Flight Forced migration of Christians from the Middle East has now become the norm. It is now impossible for a growing number of Christians – who are now an even smaller minority in a destabilized Middle East, more tormented than ever - to lead a normal healthy life, or to even stay alive in their homeland. In several countries of the Levant the definition of "Christian" is more asymptotic than ever to martyrdom, survival and emigration. In this region of the world Christians are continually subjected in many ways to various pressures and violence of all kinds which compel them to leave their homeland as a means of survival. Persecuted Christians of the Middle East leave their sacred land and everything they have, excepting the remainder of a dignity that they are often forced to subdue to imposed political-religious ideologies in order to avoid expatriation. Those who choose to stay do so at their risk and peril. This is what happens in Iraq. What is one to do in such extreme circumstances? Fight and confront against their Christian principles? Or flee? Are there other alternatives? The Christians of Iraq: A Question of Life or Death In his address at the Synod, Archbishop Athanase Matti Shaba Matoka, the Archbishop of Babylon of the Syrians in Iraq, said: 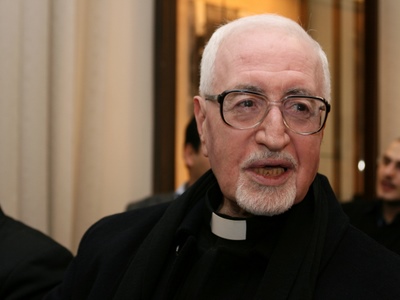 Iraq, land of Mesopotamia, land of civilizations, where Abraham was born, where Ur, Babel, and Niniveh are, land of Holy Scripture, land of faith and of martyrs... Since Christianity spread there, realized despite the persecution by the Persians throughout the centuries, the blood of martyrs flowed and the Islamic influence covered it. Today and since the Revolution of Abd el Karim Kassem, Iraq does not cease living a situation of instability of trials and wars. The last being the American occupation. Christians have always had their part in the sacrifices and tribulations: with the martyrs in the wars and all sorts of different hardships. Since the year 2003, Christians are the victims of a killing situation, which has provoked a great emigration from Iraq. Even if there are no definite statistics, however, the indicators underline that half the Christians have abandoned Iraq and that without a doubt there are only about 400,000 Christians left of the 800,000 that lived there. The invasion of Iraq by America and its allies brought to Iraq in general, and especially to its Christians, destruction and ruin on all levels. Churches were blown up, bishops and priests and lay persons were massacred, many were the victims of aggression. Doctors and businessmen were kidnapped, others were threatened, storage places and homes were pillaged...

It's been seven years already that the Christians of Iraq are systemically being targeted and that the country suffers from a "continual hemorrhage," added the prelate. For many Christians in Iraq, it is often a question of survival or death. The future of Christians in Iraq is in jeopardy and their forced expatriation, and persecution is at the heart of the concerns of the Synod Fathers. Archbishop Louis Sako, the Archbishop of Kirkuk, has expressed grave concern about the fatal hemorrhage that destroyed their communities. Archbishop Sako and Archbishop Basile Georges Casmoussa, of Mosul, both insisted Iraqi Christians have a deep desire to live in freedom in their own country instead of having to flee -- all the Father Synods, share this view. Final Message of Compassion and Hope on the Part of the Synod Assembly The Synod Fathers are paying attention in the final message of the Synod to the Christians of Iraq. This message is an acknowledgment of the suffering of Iraqi Christians and a reaffirmation of solidarity with the Iraqi people and the churches:

In our meetings and our prayers we reflected on the keen sufferings of the Iraqi people. We recalled the Christians killed in Iraq, the continued suffering of the Church in Iraq, and her children who have been displaced and dispersed throughout the world, taking their concerns for their country and their homeland with them. The Synod Fathers expressed their solidarity with the people and the Churches in Iraq expressing the hope that the emigrants, forced to leave their own country, might find in their host countries the support necessary to be able to return to their homeland and live in security. Our mission, based on our faith and our duty towards our homeland, obliges us to contribute to the construction of our countries together with all citizens, Muslims, Jews and Christians alike"."[See "The Church in the Middle East: Communion and Testimony throughout History, Challenges and Expectations in Messagio Popolo di Dio, I. 3.2, 25 - 25/10/2010 - 3]

This message is also an invitation to the world to be in solidarity with the Iraqi churches and Christians of Iraq, it is a direct invitation for all Christians of the world to pray for the Iraqi Christians and support them in this ordeal so they can return home safely and live with dignity . Love and Conviviality The solution is not to confront with violence, because it does not derive from the principle of charity which is based on the Christian faith. The answer is not to flee because there is no valid reason and there should not be any reason to for Iraqi Christians to leave their sacred land to which they have both the right and responsibility of to safeguard. The solution is love between brothers and sisters, Christians, Muslims and Jews, who now have a unique privilege not to be missed, to live in convivial communion as one family and as guardians of peace in the Holy Land. - Photo: CNS/Carol Glatz