On Thursday, January 6th, the universal Church celebrates the 74th anniversary of the death of its first male Canadian-born saint – St. André Bessette.  As you may remember, the end of last year was marked by the celebrations for St. André’s canonization on October 17th.  Salt + Light also produced a documentary on his life – God’s Doorkeeper:  St. André of Montreal.
I share with you now a wonderful reflection on the death of St. André, taken from the website of Saint Joseph’s Oratory: 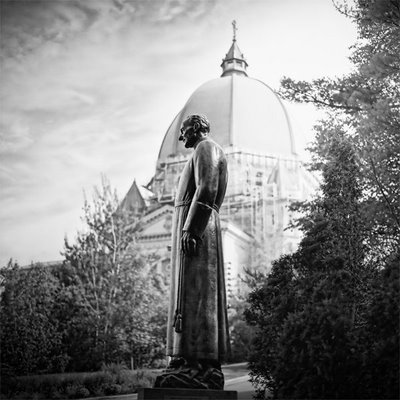 The Road to heaven For Brother André, heaven is living in God’s house. His views on death as life’s ultimate fulfilment were often expressed thus: "You know, it is permitted to desire death if one’s unique goal is to go forward God… When I die, I will go to heaven, I will be much closer to God than I am now, I will have more power to help you." A few moments before his death, those around him heard him cry out, "I am suffering so much, my God! My God." And then, in a very weak voice, "Here is the grain," referring to the Gospel of John 12:24, "unless the grain of wheat falls into the ground and dies. It remains alone. But if it dies, it brings forth much fruit." "He spent his whole life speaking of others to God, and of God to others." In giving this testimony, his friend presented a valid assessment of Brother André’s life imbued with faith, and love. In fact, it is difficult to say at what point in his life work ended and prayer began as the two seemed to flow so naturally one into the other. On January 6, 1937 at 91 years of age, Brother André died at Hôpital Notre-Dame de l'Espérance in Saint-Laurent, a suburb of Montréal. Newspapers reported that well over a million people attended his wake and burial. His body lies today in a simple tomb in the beautiful Oratory that rises so gracefully on Mount Royal. To this day, thousands of visitors come to Saint Joseph’s Oratory to receive physical and spiritual healing. Even today, Brother André remains for us a living symbol of Christian renewal to which we are all invited. Whatever Brother André was able to achieve through God’s grace, we are also able to achieve through that same grace offered to us so generously and consistently. (To read the rest, go here.)

We at Salt + Light invite you to celebrate the story of St. André with us once again, in commemoration of his death which we celebrate on January 6th. On January 6th, at 7 and 11 pm ET, tune in to the Catholic Focus episode "Remembering Brother André".  The hour-long documentary God’s Doorkeeper:  St. André of Montreal airs the same day at 8:30 pm ET and four hours later at 12:30 am ET. - Photo: © Steven Scardina 2010