Tonight's Catholic Focus is special for a couple reasons: one being that it's my very first! Secondly, the guests that appear on the program. 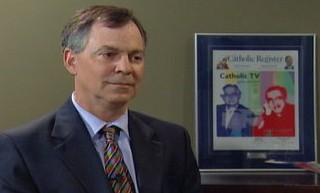 The Catholic Register's publisher and editor Joseph Sinasac joins me in studio to look at the world of Catholic media; it's ups and downs, and why a journalist would want to work in Catholic media. Back in May Salt+Light and Catholic Register co-hosted the 2008 Catholic Media Convention here in Toronto. We were incredibly lucky to have Fr. Federico Lombardi fly out from the Vatican for that conference. Fr. Lombardi is the head of Vatican Radio, Vatican Television and the Holy See Press Office. Having worked in the Holy See Press office I knew what a rare treat it was to have him here, sitting at the Salt+Light kitchen table sipping espresso. So I took advantage of the opportunity and got him on camera to answer a few questions about the conference and about Catholic Media. That started the ball rolling. As the week progressed I realized I had a dream team of "Vaticanistas" (that's the Italian name for 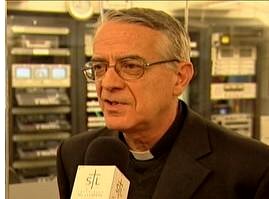 Vatican correspondents) and rather impressive roster of Cardinals and Archbishops on hand. With some help I grabbed as many as I could and got them on camera to answer my questions. The most fun had to be cornering (ahem, interviewing) people who I have worked with before, some of whom I consider mentors, and asking them why they chose to work in Catholic media. I was pleasantly surprised to hear that, like me, most of these journalists never really set out to be a "Vaticanista" or a religion reporter, but "just kind of fell into it" and have never regretted it. Tune in Wednesday, July 30th at 7pm or 11pm ET, for Catholic Focus: Catholic Media. If you can't catch it tonight, there is an encore presentation Sunday, August 3rd, at the same times. - Pictured above: Joseph Sinasac and Fr. Federico Lombardi