Canonization: Homily of the Holy Father

Canada has its first male Canadian-born Saint! Today's Canonization marks a momentous occasion for Canadian Catholics and surely one that will go down in history.
The Canonization of six new Saints took place this morning at the Vatican. Tens of thousands gathered for the Mass in St. Peter's Square. Among those gathered were over 5,000 Canadian pilgrims for the Canonization of Brother André, the first Canadian-born male Saint and 8,000 Australians for the Canonization of Mary MacKillop, Australia's first Saint. The other Saints canonized today are Stanislaw Soltys of Poland, Mother Candida Maria de Jesus of Spain, Camilla Battista da Varano of Italy and Giulia Salzano of Italy. 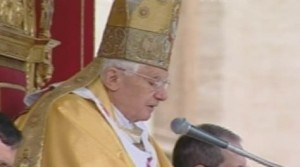 The homily of Pope Benedict XVI centered around the importance of prayer and the example given to us by the six new saints.

Dear brothers and sisters! Today in Saint Peter’s Square we are renewing the feast of holiness. With joy I address my cordial welcome to those who have come here to take part, even from very far away. A special greeting to the Cardinals, to the Bishops, and to the Superiors General of the Institutes founded by the new Saints, and to the official delegations and all the civic authorities. Together we will try to accept what the Lord tells us in the Sacred Scripture we have just heard. The Liturgy this Sunday offers us a fundamental teaching: the need to always pray ceaselessly. Sometimes we get tired of praying, we have the impression that prayer is not very useful in life, that it is not terribly effective. So we are tempted to dedicate ourselves to activity, to using all human means to achieve our aims, and without turning to God. Jesus instead affirms that we always need to pray and he does so through a particular parable (cf Lk 18:1-8). This talks about a judge who does not fear God and who has no respect for anyone, a judge who has no positive qualities, but pursues only his own interests. He is not afraid of the judgment of God, and he has no respect for his neighbor. The other character is a widow, someone in a situation of weakness. In the Bible, the widow and the orphan are the most needy categories because they are defenseless and without means. The widow goes to the judge and asks for justice. Her chances of being heard are almost non-existent because the judge holds her in contempt and she is unable to exercise any pressure on him. She cannot even appeal to religious principles, since the judge does not fear God. As a result this widow seems to have no chance. But she persists, she asks insistently, she is tiresome, and thus at the end, she manages to obtain a result from the judge. At this point Jesus makes a reflection using a fortiori argument: if in the end a dishonest judge lets himself be convinced by the prayer of a widow, how much more will God who is good answer those who pray? God in fact is generosity personified, he is merciful, and therefore he is always willing to listen to prayers. Therefore we must never despair, but always persist in prayer. The conclusion of the Gospel passage speaks of faith: “But when the Son of man comes, will he find any faith on earth?” (Lk 18:8). This is a question that seeks to inspire an increase in faith on our part. It is clear, in fact, that prayer has to be an expression of faith, otherwise it is not real prayer. If one does not believe in the goodness of God, one cannot pray in a truly appropriate manner. Faith is essential as the basis for prayerful behavior. And this is what the six new Saints who today are being proposed for veneration by the Universal Church did: Stanislaw Soltys,  André Bessette, Cándida María de Jesús Cipitria y Barriola, Mary of the Cross MacKillop, Giulia Salzano and Battista Camilla Da Varano. 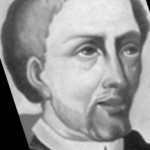 Saint Stanislaw Soltys, a 15th century religious, can also be for us an example and intercessor. All his life was tied to the Eucharist. Above all, in the Church of Corpus Domini, in Kazimierz, in modern-day Krakow, where, with his mother and father, he learned faith and piety; where he took his vows as a religious with the Canons Regular of the Lateran; where he worked as a priest, educator and was attentive to the care of the needy. In a particular way, though, he was attached to the Eucharist through his ardent love for Christ present under the form of bread and wine; living the mystery of the death and resurrection, which take place in a bloodless way during Holy Mass; through the practice of loving one’s neighbor, whose source and sign is Communion. 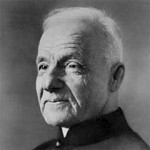 Brother André Bessette, born in Quebec, in Canada, and a religious of the Congregation of the Holy Cross, knew suffering and poverty very early in life. This led him to turn to God for prayer and an intense interior life. Doorman at the Notre Dame College in Montreal, he showed boundless charity and did everything possible to soothe the despair of those who confided in him. With little instruction, he nevertheless understood what was essential to his faith. For him, to believe meant to submit freely and lovingly to Divine Will. Everything existed through the mystery of Jesus, he lived the beatitude of the pure of heart, that of personal rectitude. It is thanks to this simplicity, he showed many God. He had the Saint Joseph Oratory of Mont Royal built, where he was the faithful guardian until his death in 1937. There, he was the witness of many healings and conversions. “Do not try to have your trials taken away from you”, he said, “rather, ask for the grace to endure them well”. For him, everything spoke of God and His presence. May we, following his example, search for God with simplicity to discover Him always present in the core of our lives! May the example of Brother André inspire Canadian Christian life! When the Son of Man comes to deliver justice for the chosen, will he find faith in 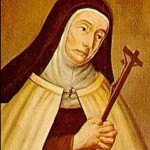 this land? (Cf. Lk 18:8). Today we can say yes, with relief and conviction, in contemplating figures such as Mother Cándida María de Jesús Cipitria y Barriola. That girl of humble origins, with a heart in which God put His mark and that soon would lead her, with the guidance of her Jesuit spiritual directors, to firmly resolve to live “only for God”. This was a decision she maintained faithfully, as she herself recalls as she is dying. She lived for God and for what He loves the most:  reaching all, bringing them the hope that does not waver, especially to those who need Him the most. “Where there is no room for the poor, there is no room for me”, the new Saint used to say, who with scarce means managed to inspire other Sisters to follow Jesus and dedicate themselves to teaching and to the promotion of women. This is how the Daughters of Jesus was founded, who today see in their Founder a model of sublime life to be imitated, and a fervent mission that needs to be continued in the many countries where both the spirit and desires of the Apostolate of Mother Candida can already be found. “Remember who your teachers were – from these you can learn the wisdom that 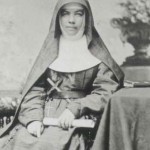 leads to salvation through faith in Christ Jesus.” For many years countless young people throughout Australia have been blessed with teachers who were inspired by the courageous and saintly example of zeal, perseverance and prayer of Mother Mary MackKillop.  She dedicated herself as a young woman to the education of the poor in the difficult and demanding terrain of rural Australia, inspiring other women to join her in the first women’s community of religious sisters of that country.  She attended to the needs of each young person entrusted to her, without regard for station or wealth, providing both intellectual and spiritual formation.  Despite many challenges, her prayers to Saint Joseph and her unflagging devotion to the Sacred Heart of Jesus, to whom she dedicated her new congregation, gave this holy woman the graces needed to remain faithful to God and to the Church. Through her intercession, may her followers today continue to serve God and the Church with faith and humility! 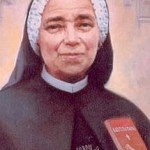 In the second half of the 19th century, in Campania, in the South of Italy, the Lord called a young elementary school teacher, Giulia Salzano, and made of her an apostle of Christian education, founder of the Congregation of the Catechetical Sisters of the Sacred Heart.  Mother Giulia understood well the importance of catechesis in the Church, and, uniting pedagogical preparation to spiritual zeal, she dedicated herself to this with generosity and intelligence, contributing to the formation of people of every age and social class. She repeated to her fellow sisters that she wanted to teach catechism up to the last hour of her life, showing with her whole being that if “God created us to know Him, love Him, and serve Him in this life”, nothing should take precedence over this task. May the example and intercession of Saint Giulia Salzano sustain the Church in her perennial task of proclaiming Christ and forming authentic Christian consciences Saint Battista Camilla Varano, Sister of the Order of St. Clare of the 15th century, 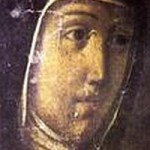 profoundly witnessed to the Gospel meaning of life, persevering especially in prayer. Having entered the monastery of Urbino at age 23, she became a protagonist in that vast movement of female Franciscan reform which was intended to fully recover the charism of St. Clare of Assisi. She promoted new monastic foundations at Camerino, where she was elected Abbess on several occasions, at Fermo and at San Severino. The life of St. Battista, completely immersed in the depths of the divine, was a constant ascent along the path of perfection, with  heroic love for God and her neighbor. This was marked by great sufferings and mystical consolations; she had decided, in fact, as she herself wrote, “to enter into the Most Sacred Heart of Jesus and to drown in the ocean of his most bitter sufferings”. In an age in which the Church was experiencing a relaxation of customs, she followed with decision the way of penitence and prayer, animated by the ardent desire for renewal of the Mystical Body of Christ.

Dear brothers and sisters, let us give thanks to the Lord for the gift of holiness, which shines in the Church and is visible today on the faces of these our brothers and sisters. Jesus also invites each of us to follow Him in order to inherit eternal life. Let us be drawn by these shining examples, let us be guided by their teachings, so that our existence might be a canticle of praise to God. Let the Virgin Mary and the intercession of the six new Saints whom we venerate with joy today obtain for us this grace. Amen.

Tune in at 9:30am ET for our English Coverage of the Canonization, hosted by Mary Rose Bacani.