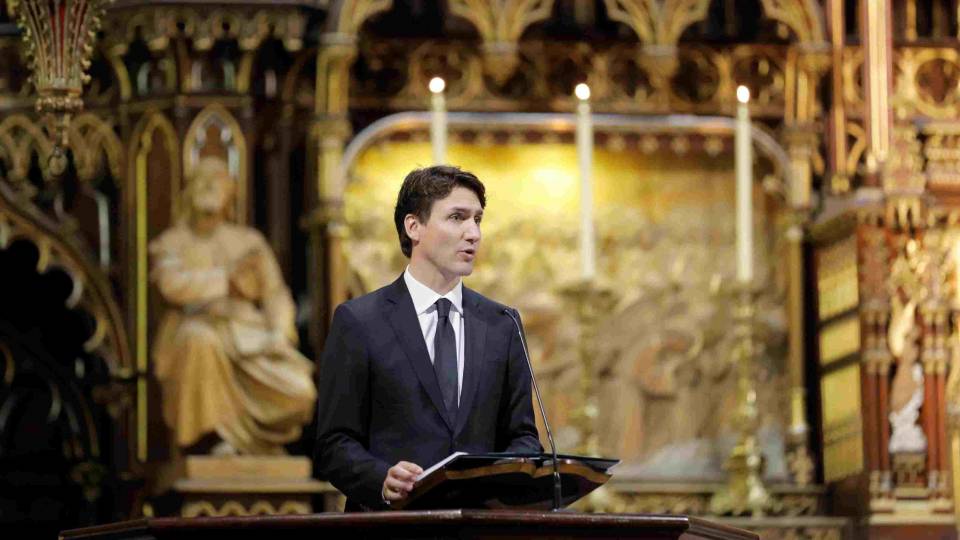 Canadian Prime Minister Justin Trudeau addresses the congregation in Montreal's Notre-Dame Basilica in 2017 (CNS photo/Dario Ayala, Reuters)
In December, Federal Labour Minister Patty Hajdu announced revisions to the Canada Summer Jobs Program. In the 2018 program, applicants were asked to tick a box attesting that their core mandate respects sexual and reproductive rights, and the right to access safe and legal abortions. The attestation was so highly contested by faith groups and others as a violation of freedom of conscience, belief, and expression that the Government removed it. In its place, the Government lists projects and job activities that make an applicant ineligible for 2019. These include projects or job activities that: Last week, the Canadian Conference of Catholic Bishops issued a response to this revision, calling it “a step in the right direction.” However, the bishops point to ambiguity in the revised language:

“An area of concern remains in the ‘eligible activities’ section of the application with language relating to ‘restricting or undermining rights’ and how this wording will be interpreted for applicants.”

It is clear the Government wishes to protect equality rights in the summer jobs program. It is also clear the Government believes some “pro-life” activities are in violation of those equality rights. But the revisions for 2019 do not specify what those activities are. This is the question that remains unanswered. What exactly are the activities the Government is trying to filter out of the program? Let’s say, for example, a “pro-life” group’s core mandate is to educate Canadians about abortion with the ultimate goal of persuading Canadians to adopt restrictive laws. Let’s say that education is done primarily through group seminars, lectures, and public rallies. Do these activities “restrict or undermine” rights according to the Government? It’s unclear. It should be noted that the vast majority of faith-based applicants, including Catholic organizations, will welcome the removal of the 2018 attestation, and can, in good conscience, apply for the program. But the debate around the summer jobs program will continue because underneath it lies a more fundamental question about Charter Rights in Canada, namely, what is the relationship between fundamental freedoms (conscience, belief, expression) and equality rights (equal protection and benefit of the law without discrimination)? How this question relates to sexual and reproductive rights, including the right to access safe and legal abortions further complicates it. There is no constitutional right to abortion in Canada. It is legal because constitutional restrictions on abortion were struck down by the Supreme Court in 1988. It is abundantly clear from the public debate over the summer jobs program that this issue remains highly contested in Canada. A few groups on either side have drawn a line in the sand, while the majority of Canadians fall somewhere in the middle. Based on the 2018 attestation and the 2019 revisions, it seems the current Government has chosen a side. For that reason the onus should be on them to specify exactly how they interpret the Charter of Rights and Freedoms as it applies to activities deemed ineligible for application to the summer jobs program. All Canadians, regardless of their opinion on this issue, would welcome a clarification.

Want to read more on this topic?