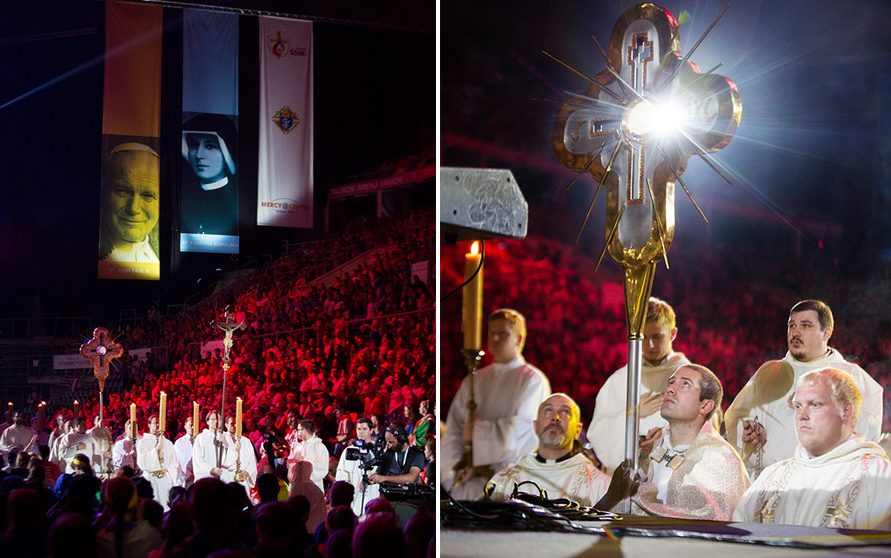 Night of Mercy, World Youth Day in Kraków, Poland. Catholic Standard photo by Jaclyn Lippelmann.
Two years ago I was home, in Panama for my parents 50th Wedding Anniversary. They were married December 26, 1964. Of course, the priest had to make a comment about how St. Stephen was the first martyr and how Marriage is like martyrdom. We laughed but he had a point. Martyrs are not killed against their will. Martyrs give up their lives willingly. That is what we do in Marriage: We give our lives totally.  As we approach the end of 2016, and especially today, on the Feast of St. Stephen, I am thinking about marriage, martyrdom and the diaconate. Those are the themes that I will remember when thinking of this Year of Mercy. Marriage When Pope Francis published his Apostolic Exhortation, Amoris Laetitia, I did not understand how deeply that one document, in particular chapter 8 would impact my diaconal ministry. In fact my journey towards Amoris Laetitia Chapter 8 had begun a year earlier when I began walking with a couple –  who are very active in our parish and whose 12 year-old daughter is one of our star altar servers – who were not married in the Church. I remember when our priest found out and had to tell them that “perhaps they should not be coming up to receive Communion.” To be fair, neither the husband nor the wife were previously married and divorced, so bringing them into Communion was not difficult. But I had not realized how common this is. Since then, I have walked with three other couples who are in similar situations. Some were previously married; some required annulments; one had more complicated circumstances; but all could be brought into Communion with the Church. This year I officiated two of these Marriages for couples who were married outside of the Church and I preached at a third. What joy was it to be able to help these couples! Each time, the most emotional part of the ceremony was Communion. What a privilege to be able to finally give Communion to these couples! I hope to be able to continue with the fourth couple for next year and since then two more couples have approached me to tell me that they are not married in the Church. This is not reflective of my parish; it is more common than you think. In writing Amoris Laetitia, the Synod Fathers have shown that they really have a pulse on the life of the regular parish and regular parishioners. 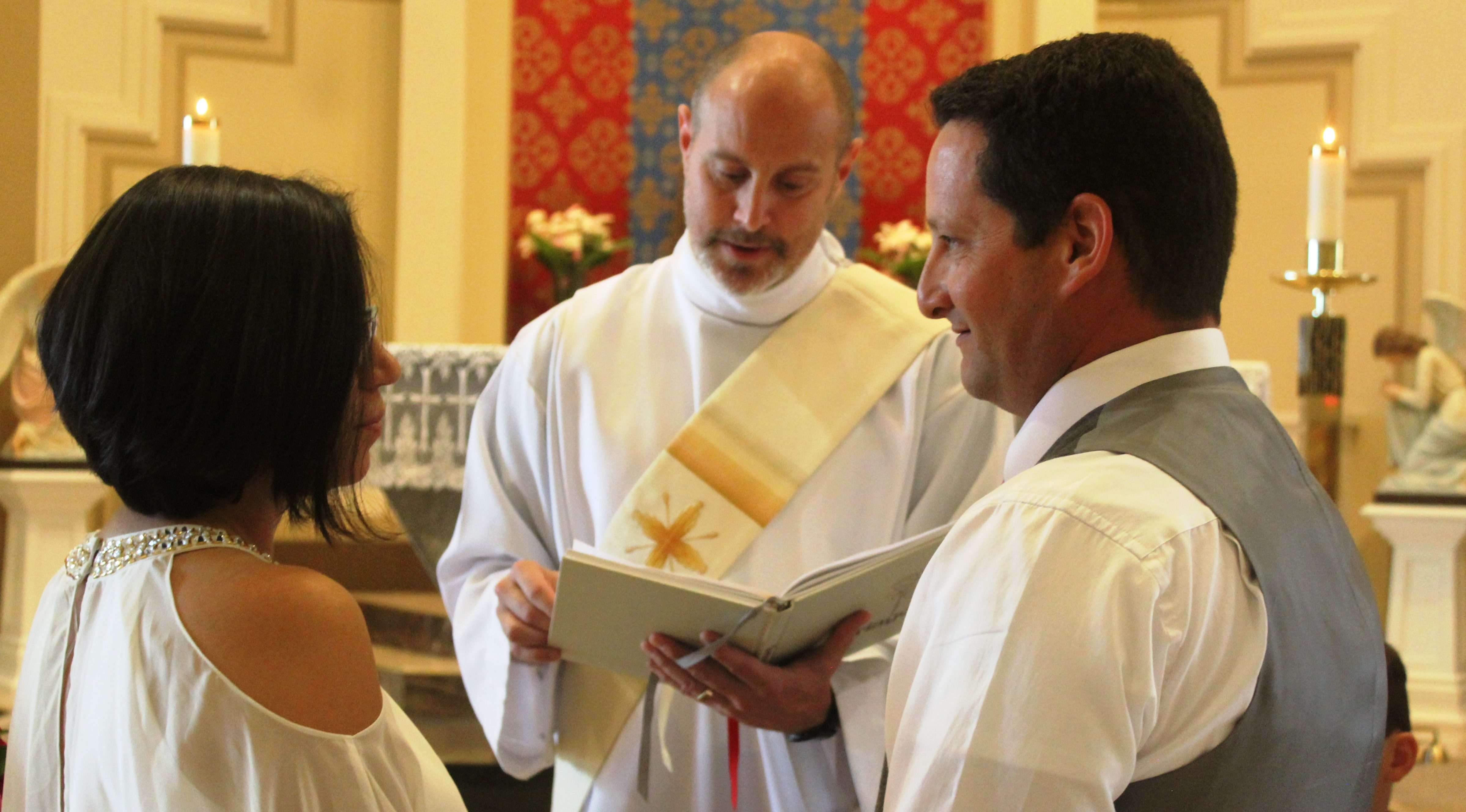 Martyrdom Part of my diaconal ministry is working with Mexican migrant workers who come to Canada for several months every year to work in our farms. It is a very difficult ministry because of the transient nature of the population. But every once in a while a particular spiritual or pastoral need arises. This year I had one of these experiences. It happened because one of the workers, Samuel, after a bad fall, was left in a vegetative state in the hospital. His wife came from Mexico to be with me and thus began a slow and difficult journey towards letting him go. After two months of being unresponsive and with no hope for recovery, she decided to disconnect him from life support. Once in the palliative care unit, he lived for 9 more days. I’ve never been in the hospital with someone who’s on life support. I’ve never been with someone who has to “decide” whether their husband lives or dies. I’m a deacon who is much more comfortable with marriages and baptisms. As difficult as it was, it was a great privilege to be able to accompany the family through this very difficult time. This experience really taught me something about marriage and martyrdom. The couple was not Catholic – they belong to an Evangelical Community in Mexico – still, being with them every day and then for another month after he died – because of complications with transporting the body to Mexico and other insurance issues – was an experience of Communion. The Diaconate Bringing Communion to people is not something that I would say is a specific diaconal task. Although the original ministers of the Eucharist to shut-ins would have been deacons, this is something that today has been given to the laity. But there is something very diaconal about bringing people into Communion – either literally bringing them Communion, or bringing Christ to them. This Summer I worked for the Supreme Council of the Knights of Columbus on the Mercy Centre, their World Youth Day English-language site. One of the events we organized was the Night of Mercy a partnership with Life Teen and Bishop Robert Barron, with music by Matt Maher and Audrey Assad.  It was a night of Adoration in a stadium with some 20,000 people in attendance. Part of the challenge was to make something that is so intimate work in such a large space: How to make something universal also feel intimate; how to help people feel like it’s just them and Jesus and at the same time make them feel that it’s not just them and Jesus. In order to do this we decided to include a Eucharistic Procession and to make it work for so many people we needed a very large Monstrance. This Monstrance was eight feet tall and required three people to carry it. I was one of the two deacons carrying the Monstrance with Fr. Joseph Anthony Kress. I cannot begin to describe what this was like: tiring, effortless, excruciating, emotional, difficult, inspiring, joyful… It was a great joy and honour to help bring Jesus in the Eucharist to the young people who were present. I felt like what it may have been like walking with Jesus when he entered a village. People came to watch. Some cried. Some bowed down in worship. Some reached out to him.  Others sang, others prayed. Some sat in silence. Is that what diaconal ministry is all about? Like the Cyrenian helping Jesus carry the Cross, or like Mary carrying the child in her womb to her cousin Elizabeth? This was John the Baptist pointing out to the One saying, “Here is the Lamb of God”; these are the joyful feet of the messenger that brings the Good News. I would say that this was me bringing an experience of God’s mercy to others, but in fact, it was the other way around. It was an opportunity for me to experience the incredible and abundant Mercy of God. Bringing Jesus 2016 was also a year for change. As I write this, I am sitting at my new desk at our new address, 250 Davisville Ave. One of the last things I had to do at our old office was to “close” the Chapel. We exposed the Blessed Sacrament for a Holy Hour and then Benediction. I then went into the Sacristy to consume the few Hosts that we had in the Tabernacle. It was a very moving experience, but appropriate as I said goodbye to the place. The last day that I was at the Richmond St. address, I was feeling a little nostalgic about our humble beginnings and that space where we “lived” for 12 years. I asked if there was anything fragile that I could bring with me in my car to our new location. At first there was nothing. Then I was asked if I would bring Jesus. Yes, you read that right: Jesus. This “Jesus” is the Corpus that hung on a cross behind our altar in the chapel. I gladly accepted. Once again, but this time literally, bringing Jesus. 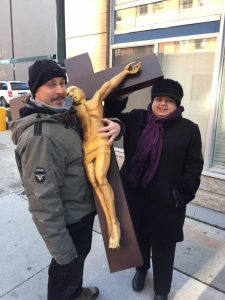 When I look back at 2016, I will remember World Youth Day and the beautifully moving Night of Mercy and I will remember Samuel who died in a country where he traveled to every year for almost 20 years so that his family in Mexico could have a better life. I will remember the couples I helped bring into Communion with the Church and I will remember that this was the year of the move. Mostly I will remember all the people who, in small or big ways, came into my life to give me the opportunity to do what we are all called to do at all times: bring Jesus to others. Isn’t that what Mercy is all about?