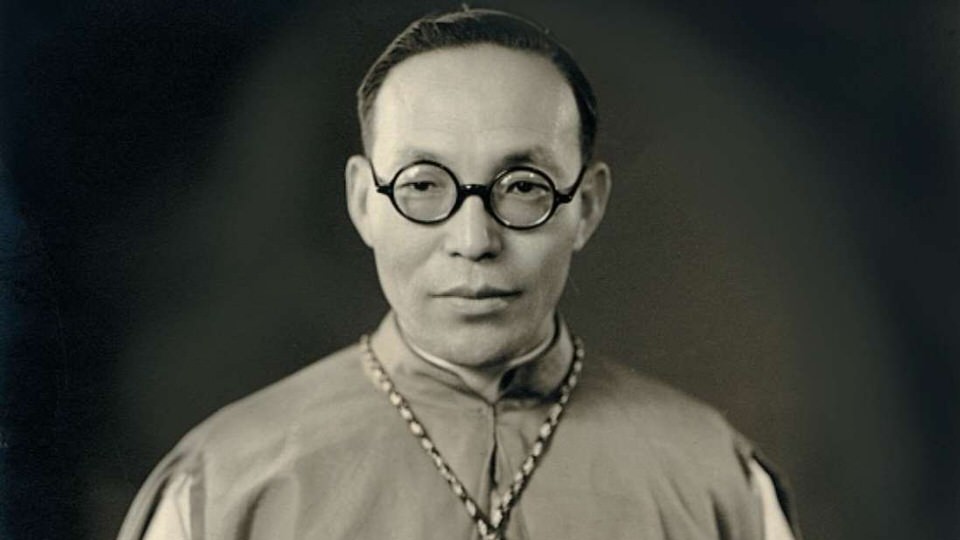 Bishop Francis Hong Yong-ho is among 81 martyrs of the Korean War on the path to sainthood. He is pictured in an undated portrait. (CNS photo/courtesy Catholic Bishops' Conference of Korea)
SEOUL, South Korea (CNS) -- Bishops in South Korea have moved ahead to pursue the canonization of 81 Catholics, including priests, religious and laypeople who were martyred by communist forces during the Korean War. The Special Episcopal Commission to Promote Beatification and Canonization held its closing session June 7 for preliminary examination of 81 Servants of God, the title accorded to individuals as the first step toward canonization, according to a notice from the bishops' conference of Korea. The bishops agreed that the candidates were "witnesses of modern and contemporary faith" of the Korean Church, ucanews.com reported. Sainthood candidates include Bishop Francis Hong Yong-ho of Pyongyang, 49 priests, seven religious and 23 laymen who were tortured and killed by the communists before and after the Korean War, which was fought from 1950 to 1953. The martyrs include foreign missionaries. One was Msgr. Patrick James Byrne, an American Maryknoll missionary who was the apostolic delegate to Korea. The bishops' conference said a preliminary examination of data and research materials began Feb. 22, 2017, and 25 sessions were held until May 13 this year. The committee will submit the data and documents it has gathered to the Vatican's Dicastery for the Causes of Saints. During their spring meeting in 2008, Korean bishops agreed to advance the cause of canonization for 81 candidates who testified their faith amid brutal persecution. The bishops in their respective dioceses conducted research and collected data and documents on the candidates as the martyrs hailed from dioceses that included Seoul, Gwangju, Jeju, Suwon, Incheon, Chuncheon and Pyongyang. More than half the martyrs -- 46 -- were from the Seoul Archdiocese. In 2013, Korean bishops entrusted the Seoul Archdiocese with the jurisdiction for preliminary investigation. The following year, the martyrs were declared Servants of God, marking the official beginning of diocesan and national phases of the canonization process. The progress came months after the state-run Truth and Reconciliation Commission released a report that found more than 1,100 Christians, including Bishop Hong, were massacred for their faith by North Korean forces during the Korean War. The state commission said the massacres could have stemmed from the North's policy of defining Christianity as "an impure force" that warranted oppression. Bishop Hong, the first bishop of Pyongyang, was imprisoned in 1949 by the communist leaders and later disappeared. He was then 43. Until 2013, the Vatican's official yearbook mentioned Bishop Hong as head of the church in Pyongyang who was "missing." When the Vatican accepted the bishop as a Servant of God in 2014, he became the first candidate for sainthood from North Korea. Bishop Hong was born in 1906 and ordained a priest in 1933 when Korea was under Japanese occupation. He was ordained a bishop in 1944 to lead the Apostolic Vicariate of Pyongyang.