Benedict XVI as a Pope of Addition 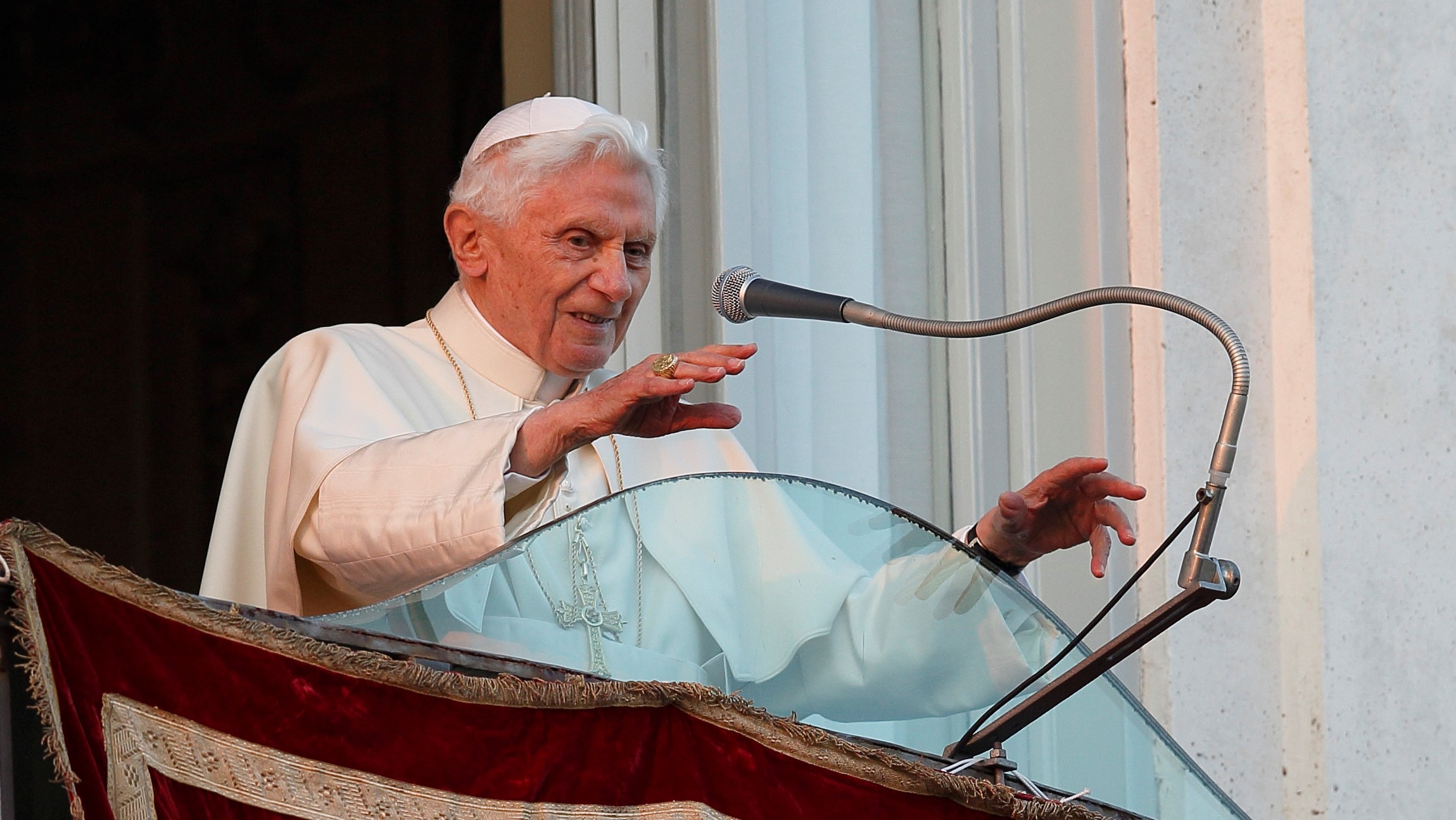 Pope Benedict XVI greets the crowd as he concludes his final public appearance from the balcony of the papal villa in Castel Gandolfo, Italy, on the day of his resignation, in this Feb. 28, 2013, file photo. (CNS photo/Paul Haring)

On June 29, 1951, Joseph Ratzinger was ordained to the priesthood. In honour of this anniversary of our Pope Emeritus, we wanted to share with you this gem from our archives, originally published in the Spring 2010 issue of Lampstand.

Benedict XVI as a Pope of Addition

When Benedict XVI was elected to the papacy almost five years ago, media stereotypes suggested he would be a pope of subtraction. “God’s Rottweiler” was seen as a disciplinarian who would seek a smaller and more insular Catholic Church – a leaner, meaner faith, leery about contamination by the outside world. It’s a keen irony, therefore, albeit one the world hasn’t quite yet noticed, that the great crises of Benedict’s pontificate so far can more accurately be read in terms of the turbulence of efforts to reach out. CONSIDER THREE CASES: 1. Benedict’s lecture at the University of Regensburg in September 2006, which stirred a firestorm in the Muslim world by appearing to link Muhammad with violence; 2. His lifting of the excommunications of four traditionalist bishops, including one who has minimized the Holocaust, in January 2009; 3. His creation of new structures, called “ordinariates,” to receive former Anglicans last November. Each move unleashed wide controversy, and each was read as an attempt to “roll back the clock” on the reforming Second Vatican Council in the mid-1960s. In retrospect, however, it seems clear that’s not quite what Benedict had in mind. Anyone who takes the time to read Benedict’s Regensburg lecture, for example, will find that his theme was the necessary synthesis between reason and faith, and his suggestion that both Islamic cultures and the West have historically veered too far in one direction or the other – the West by over-emphasizing reason, and Muslim societies by accenting faith to the exclusion of reason. In other words, this was a platform for learning from one another, not a charter document for a “clash of civilizations.” 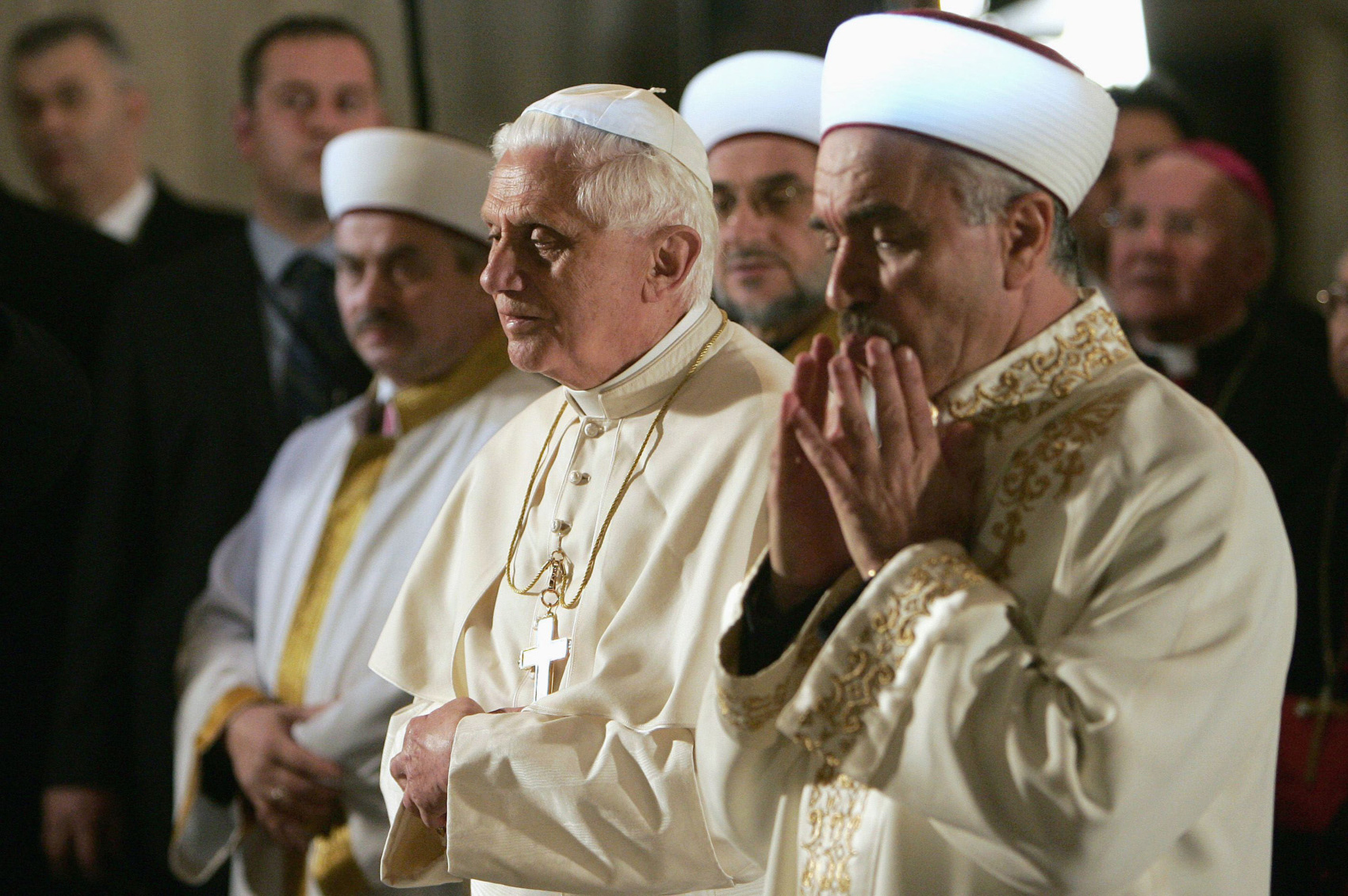 Pope Benedict XVI and Mustafa Cagrici, the grand mufti of Istanbul, pray in the Blue Mosque in Istanbul in this 2006 file photo.(CNS photo/Patrick Hertzog, Pool via Reuters)
With the lifting of the excommunications, Benedict wasn’t so much steering Catholicism to the right as prodding the traditionalists toward the center, in an effort to heal the only formal schism in the wake of Vatican II. That point became explicit in the wake of the cause célèbre over Bishop Richard Williamson, who has denied that the Nazis used gas chambers, when the Vatican issued a statement indicating that if Williamson and his colleagues wish to exercise any ministry, they must accept the teaching of the Second Vatican Council and, in effect, join the Catholic mainstream. Much the same logic applies to the Anglicans. For the moment, those most likely to take up Benedict’s offer may well be conservative Anglicans disgruntled by moves toward same-sex marriage, gay clergy, and female priests and bishops. Yet Benedict XVI “thinks in centuries,” and his logic cuts deeper than scoring a quick (and, to be honest, almost negligible) boost in Catholicism’s “market share.” Instead, Benedict’s aim is to offer a concrete example of what ecumenical theologians call “reconciled diversity”– a Catholic Church big enough, generous enough, to contain within itself the genius of other Christian traditions. Whether or not an “ordinariate” will prove the right vehicle, Benedict’s intentions were obviously not to craft a smaller and more uniform church. A similar point applies to other attempts at outreach – for example, Benedict’s handling of the sexual abuse scandals. Benedict is the first pope to meet with victims, in both the United States and Australia. He has spoken candidly about the crisis, most recently with the Irish bishops, and has disciplined even high-profile Vatican favorites caught up in sexual misconduct (the founder of the Legionaries of Christ, the late Fr. Marcial Maciel Degollado, is the best example, but not the only one). He has also signaled his willingness to consider other reforms. 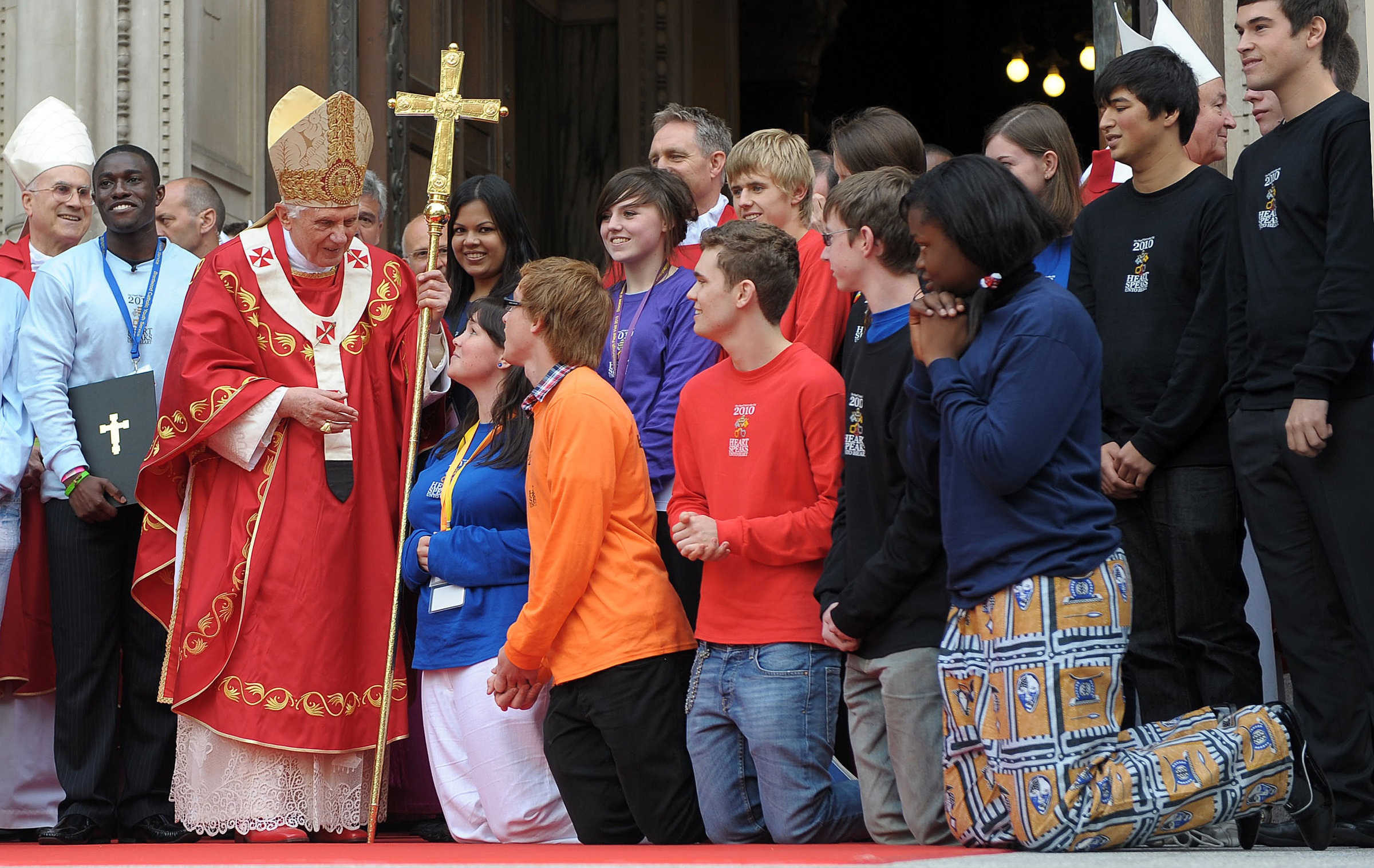 Pope Benedict XVI talks with Catholic youths outside Westminster Cathedral in central London on Sept. 18, 2010. During Mass at the cathedral, the pope expressed his "deep sorrow" to the victims of clerical sexual abuse, saying these crimes have caused immense suffering and feelings of "shame and humiliation" throughout the church. (CNS photo/Alessia Giuliani, Catholic Press Photo)
Whether his response has been sufficient is a matter for legitimate debate, but these are hardly the moves of a pope whose basic message to those scarred by the crisis is, “If you don’t like it, get out.” Why, then, has the world been slow to recognize Benedict as a “pope of addition”? In part, the gap between perception and reality illustrates the staying power of pre-existing scripts; in part, it reflects the nastiness of internal Catholic politics, with some circles in the Church, on both left and right, eager to read anything the pope does as a victory or a defeat. It must also be acknowledged that the Vatican’s communications efforts have sometimes misfired – coming far too late, after a flawed storyline has already taken hold, and missing obvious opportunities to craft a more accurate impression. However one explains it, the result is that a story still waits to be told about Benedict XVI ... one in which the lowest moments of his papacy, at least from a PR point of view, begin to look like cornerstones of a more intriguing, and far more inclusive, legacy. 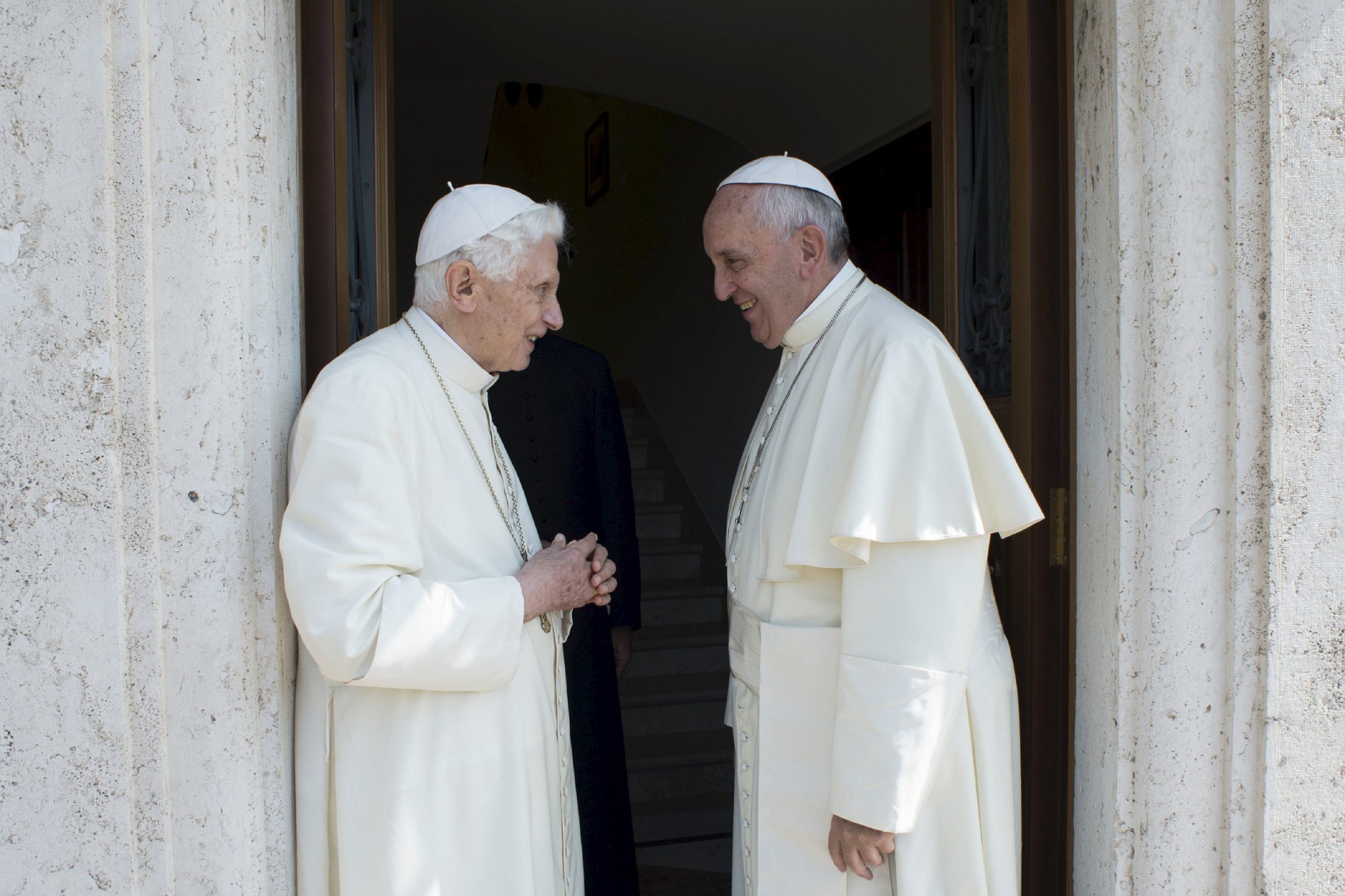 Retired Pope Benedict XVI talks with Pope Francis during a meeting at the Vatican in this June 30, 2015, file photo. (CNS photo/L'Osservatore Romano via Reuters )
John L. Allen Jr. is a well-known journalist and Vaticanista and editor of the Catholic news website Crux. He has written several books, including two on Pope Emeritus Benedict: Pope Benedict XVI: A Biography of Joseph Ratzinger and The Rise of Benedict XVI: The Inside Story of How the Pope Was Elected and Where He Will Take the Catholic Church.