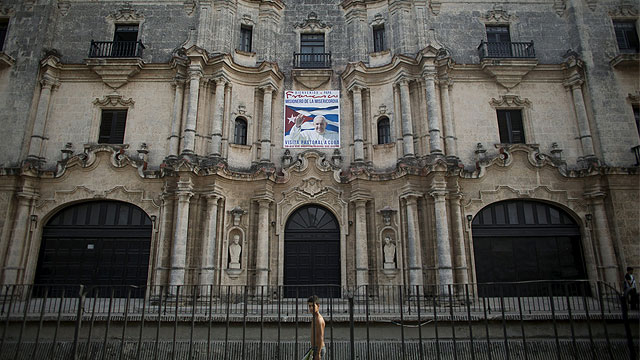 With 18 days to go before his plane touches down on U.S. soil, the U.S. media is focusing on the places the pope will visit in their country, how to get tickets and where to buy pope memorabilia. At the same time a much different church is quietly preparing to welcome Pope Francis to Cuba.
Father José Conrado Rodríguez, a pastor from Havana told the Vatican newspaper L’osservatore Romano that even though restrictions against the church and religious organizations have lessened in recent years, the Cuban Church is still small and in need of material help. He said the majority of Catholics on the island do not have a place to pray.
The Bishop of Guantanamo-Baraoca told Vatican Radio with the expected arrival of the pope there is a sense of new possibilities and new hope for Cuban - U.S. Dialogue. He went on to say the Church in Cuba faces the same challenges as the Church around the world “moral misery.”
Yet amid the seemingly unfortunately assessment offered by local clergy, one Italian journalist pointed out there is a healthy religious press across the country. Alver Metali cited the magazine “Palabra Nueva” which is distributed in parishes across the country and has the highest circulation of any Cuban publication. While there are others that are better known, the circulation of many of those publications is limited to communist party members, according to Metalli. He claims “Palabra Nueva” is not an exception, but the highest point in the crown of religious press in Cuba.
Yet this small, materially struggling church, and the visit of its leader is causing Cuba to roll up its sleeves in preparation for its third papal visit. While the church has prepared its faithful, authorities have pulled out all the stops: repaving damaged roads on the papal route, sprucing up buildings the pope will see during his travels, and doing much needed infrastructure maintenance - if only in the places the pope will see as he drives by.
Expectations are also high for this visit. The last time a pope visited, Good Friday became a national holiday. When John Paul II visited, Christmas became a national holiday. Pope Francis has already helped bring about a long awaited thaw in the U.S.-Cuba relations without setting foot in the country. How much more impact, what effect will he have once he actually lands?
Vatican Connections returns next week with Season 4 Friday, September 11, 2015!
--
CNS photo/Alexandre Meneghini, Reuters