Behind Vatican Walls: New Custodian of the Holy Land 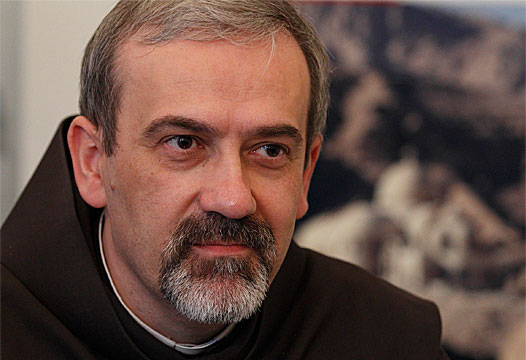 (CNS photo/Paul Haring) There is a new Franciscan Custodian of the Holy Land. The Order of Friars Minor elected Father Francesco Patton, OFM as the new Custos. He replaces Father Pierbattista Pizzaballa who ended a 12 year term as Custos in April. Father Patton is 53 years old and comes from the Trent region of Italy. He was ordained a priest in 1983. Since then he completed a licentiate in Social Communication at the Salesian Pontifical University in Rome and is enrolled in the order of journalists. He has had a variety of posts within the Franciscan order and with his diocese. Most recently Fr. Patton has been Minister General (superior general) for the St. Anthony Province of the order, which includes all Franciscan Friars in northern Italy. The Custos of the Holy Land is considered one of the Catholic ordinaries of the Middle East even though he is not ordained a bishop.His mandate lasts six years but can be extended if the Franciscans and the Holy See believe it is necessary. The Custos works with the heads of the Greek Orthodox, Armenian, Coptic, Syriac and Ethiopian Churches to maintain the status quo. In regards to the Holy Land “status quo” refers to an agreement ratified in 1852 that lays out the ownership of the various christian sanctuaries and the spaces within them. The agreement also regulates the times and durations of religious functions celebrated in those sanctuaries by the different Christian churches. Any change to the status quo agreement requires the consent of all the churches represented by the agreement. Given that the ownership of different sanctuaries is often linked to national interests of neighbouring countries, maintaining that status quo can be quite challenging. New Custos, New Focus, New Story The appointment of Fr. Patton could also signal a new approach to ministering in the delicate region of the Middle East. Father Patton holds a graduate degree in journalism and social communication while past custodians had extensive backgrounds in scripture and oriental churches. During a recent visit to the Holy Land, representatives of various church organizations in the region told me one of the biggest challenges they face is telling the story of life in the Holy Land for Christians. The world is well aware of the plight of Christians in Syria and Iraq but less so about the challenges faced by Arabs, especially Arab Christians in Israel and Palestine. Various officials told me the information that makes it out to the international community about either overlooks the hardship faced by Arabs, or paints the picture of a menacing threat from which Israel needs to defend itself at all costs. There is little talk of severe water restrictions to Palestine, long waits at checkpoints, a near impossibility of getting permission to go to Jerusalem, or the seizing of land from private Palestinians for the construction of new sections of the Israeli wall. Another official told me tourists believe it is unsafe or not possible to visit Bethlehem. In reality tourism in pretty much the one industry Bethlehem has going for it. Because of the hardships in the entire region, every year hundreds of Christian families leave the Holy Land. According to the Franciscan Foundation for the Holy Land, if emigration continues at current rates, within 50 years there will be no Christian community in the Holy Land. Given the need to get the full story of the Holy Land in the public eye and stay on good terms with all the key players on the ground, the appointment of a Custos with a background in Social Communication could signal a shift in approach. While theology, scripture, and historical knowledge are important, in this modern mediatic age, knowing how to shape a message and get it out into the world is just as important. This week's episode of Vatican Connections will be available below shortly.