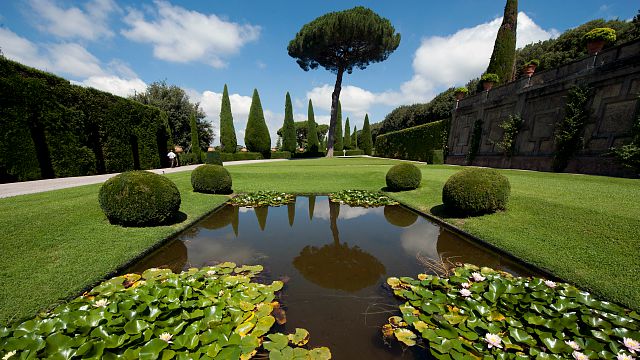 Rome, the eternal city, is conveniently located just barely inland from Italy’s Tyrrhenian coast and is surrounded by hills. This combination of geographical features means the summer months are hot, humid and smoggy. By August, it is next to impossible to breathe in the city. Thus Roman residents flee and take refuge in the beach or mountain village of their choice. Since 1623, popes have taken part in this exodus from Rome. Until now.
Jesuit Pope
Perhaps it is to be expected that a Jesuit would not feel the need to have a second residence. Maybe it is because he has lived in far hotter climates where retreating to a summer residence is a luxury reserved for the rich; or perhaps it is just a symptom of his need to stay close to his “habitat”. Whatever the reason Pope Francis has shown no interest in using the residence at Castel Gandolfo himself. For the third year in a row he has not scheduled a long term stay at the summer residence.
This omission has residents of the hilltop town disappointed. Besides the stunning views of Lake Albano, quaint restaurants along the lakeside featuring fresh porchetta and fish, and picturesque hiking trails, the town’s only bankable attraction is the fact that the pope lives here during the summer and leads the Angelus every Sunday. The current pope’s decision to stay in Rome means local business owners face an uncertain future with hard times ahead. At least, this is what some media reports would have you believe.
Why do the residents of Castel Gandolfo feel such a profound sense of abandonment? More importantly, have they really been left high and dry by the pope? A history of abandonment
At 55 hectares the papal residence at Castel Gandolfo is larger than Vatican City State, and can be traced back to days of the emperor Domitian. After Domitian died his successors saw no need for his villa (a familiar story). By 1596 the Savelli family owned an estate built over the ruins of Domitian’s villa.
Alas, the Savelli family fell on hard times and failed to repay an important loan. Pope Clement VIII issued a papal bull seizing the Savelli Villa as repayment for the outstanding loan and incorporated a large part of the property as Holy See territory. In 1623 Pope Urban VIII, who had a habit of leaving Rome during the summer to avoid disease, began using the villa at Castel Gandolfo as his official summer residence. He believed a pope should not have to stay in other people’s homes. Since then popes have retreated to Castel Gandolfo during the summer months.
As often happens with a centuries old institution, each pope left his mark on the residence. Today the papal villa at Castel Gandolfo includes a residence for the pope and a team of household staff, a fully functional farm that can provide food to the Vatican (including honey), an observatory (run by the Jesuits) and a vast, manicured garden. Pope Francis’ decision not to use the summer residence does not in any way mean that the house or the town are empty. Open Doors
In 2014, the Vatican announced that the gardens of the Papal Summer Residence would be open to the public for the first time. Though visitors must purchase a ticket in advance from the Vatican Museums website, and tour times are limited, the Castel Gandolfo Papal Gardens are a must see for both garden and archeology enthusiasts. The remains of Domitian’s villa have been incorporated into the design of the terraced gardens.
While the gardens are open to the ticket-holding public, there are currently no facilities within those gardens for tourist essentials like food, drink, and souvenirs. (Or so it would seem from the reports of friends and colleagues who have visited the gardens). Thus the merchants of Castel Gandolfo stand to gain year round from the steady stream of visitors to these previously restricted gardens.
Links For a less paraphrased history of the Papal Residence at Castel Gandolfo and all its previous inhabitants, check out the Vatican City State website.