America votes: How a deeper reflection on conscience was unexpectedly triggered in the Catholic mindset 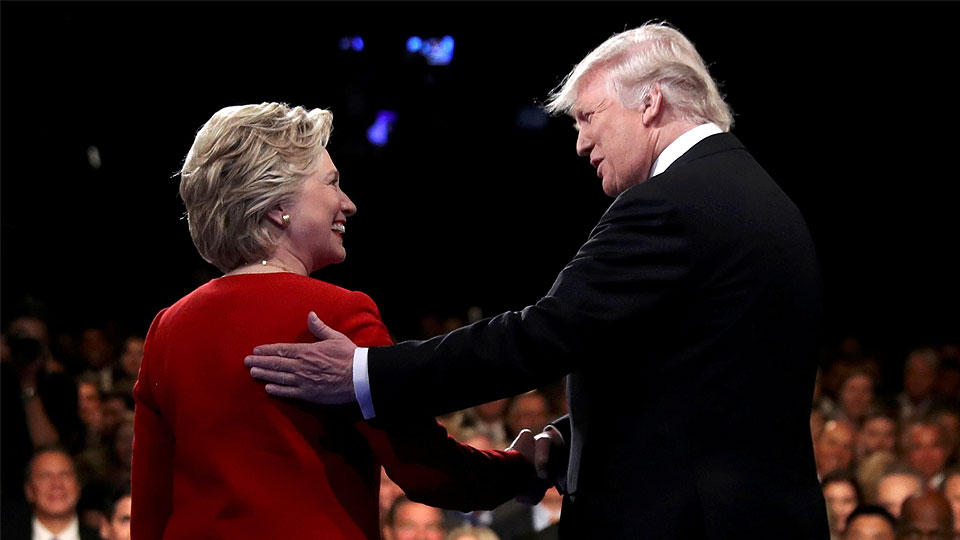 U.S. Democratic presidential nominee Hillary Clinton and Republican presidential nominee Donald Trump greet each other at the start of their first presidential debate Sept. 27 at Hofstra University in Hempstead, N.Y.
What is left to say ahead of the historic election for the next president of the United States of America? Our neighbours to the south head to the voting booths on Tuesday to make a decision that will set one of two very different courses for the next four years and the stakes couldn’t be higher. Watching the political conversation and analysis unfold in Catholic circles has been fascinating. Like other Americans, many Catholics have an understandable aversion to both Hilary Clinton and Donald Trump. The predictable arguments for each candidate have been made: Trump because he’s against abortion, Clinton because she’s not Trump. But a third argument has become unusually popular among Catholics in this campaign, namely, the decision not to vote at all. Catholics are taught from an early age that voting is important. Yes, it’s a privilege to vote in a democratic society, and citizens should respect that. But for Catholics the concept of the ‘common good’ fortifies this prerogative. If there’s one nugget of Catholic Social Teaching that tends to sink in to the Catholic psyche it’s the responsibility and duty to vote to further the common good. Part of being Catholic, we are taught, is the simple realization that we’re all in this together. And so, it’s a bit surprising—though understandable—to see some American Catholics suggesting that the morally responsible decision is to stay home on Tuesday. The statement, as every Catholic knows, goes like this: “I can’t in good conscience vote for either candidate.” And, as every Catholic knows, that tends to be the end of the conversation. Catholics have a deific respect for individual conscience, which, as the Church teaches, is a person’s “most secret core and sanctuary.” (CCC 1776) In every election Catholics appeal to conscience in defense of their vote. Informed Catholic commentators who are faithful to the Church’s tradition and astute Bishops issue guidelines and considerations for voters free of subliminal endorsements. But in this campaign, the typical conversation around conscience has evolved due to a sincere distrust of both candidates. Catholics who would traditionally vote Republican or Democrat are questioning their party allegiance because of the names on the ticket. An American Catholic who takes responsibility to form and inform his or her conscience is faced with a serious moral predicament. What’s new in this election is the degree to which Catholics have been provoked into evaluating or re-evaluating the truth about individual freedom of conscience. Leaving aside all judgement, it is possible for a person to vote for Clinton in good conscience. Likewise, it is possible for a person to vote for Trump in good conscience. And it is possible for a person to choose not to vote in good conscience. That realization is beginning to sink in, and is prompting further reflection on the reality of conscience and the Church’s categorical defense of it. “A human being must always obey the certain judgment of his conscience. If he were deliberately to act against it, he would condemn himself,” the Catechism says. (CCC 1790) “Yet,” it continues, “It can happen that moral conscience remains in ignorance and makes erroneous judgments about acts to be performed or already committed.” The Church does not teach relativism, but insists on an objective moral law which comes from God and must be obeyed by individuals. However, if “ignorance is invincible, or the moral subject is not responsible for his erroneous judgment, the evil committed by the person cannot be imputed to him. (CCC 1793) There may be an objective, morally right decision in this election. But that is not for us to decide here. The point is that the Catholic community has been provoked into the realization that a brother or sister in Christ will walk into the voting booth on Tuesday and cast a ballot for the opposite candidate, or choose not to vote at all, and that brother or sister has the right to do so according to their conscience, which is from God and is protected under the teaching authority of the Church. In September I attended the annual plenary assembly of the Canadian Bishops. I struck up a conversation with a very wise bishop from Quebec about this question of conscience. The topic was Pope Francis’ recent teaching document Amoris Laetitia on the family. We—like everyone else!—were discussing whether or not a divorced and remarried Catholic could, in some circumstances, receive the Eucharist, as Francis’ document suggests (see footnote 351 in paragraph 305). At one point he said, “Look, we must present the full teaching of the Church to people. Then they must submit…” He paused, looked at me intently, smiled and said, “Submit to their conscience.” All of the campaigning, debating, polls and predictions will be over in a few days. Based on expected voter turnout we know that a minority of Americans will be content; the majority will be discontent. Going forward will be difficult in a divided country. The Catholic community must help in this regard. It should be a uniting force, not a dividing one. The question of conscience that was triggered in an unexpected way during the campaign and provoked a deeper reflection on the innate value and freedom of the human person, can be the foundation for a new political discourse in the face of polarity. A Catholic understanding of conscience can serve as the foundation of a much needed political bi-partisanship.

“A person has the right to act in conscience and in freedom so as personally to make moral decisions. He or she must not be forced to act contrary to conscience. Nor must he or she be prevented from acting according to conscience, especially in religious matters.” (CCC 1782)