A Rebellion of Courage, Mercy, Light, Goodness and Hope in Krakow 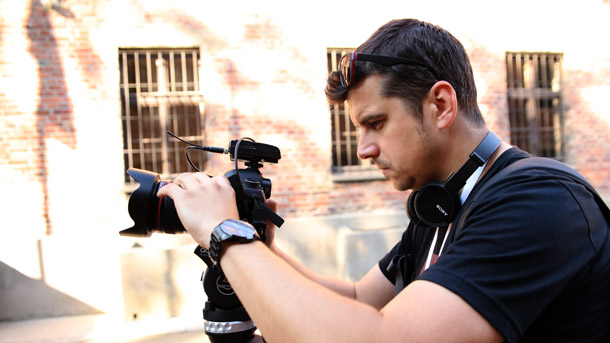 When I arrived a day early, the streets of Krakow were still empty. However, you could tell something special was about to take place. Last minute preparations were overlapping with first small, spontaneous musical performances and youth trickling in with flags from around the world. When our team came together the next day, I could tell everyone was excited. They shared their plans, ideas and tried to organize the upcoming week to experience and report back as much as they possibly could. Later that day, as I pressed “record” for the very first time, Cardinal Dziwisz (The Archbishop of Krakow and once a personal aide to Pope John Paul II) was standing on the other side of the lens. He welcomed us and let us celebrate mass in the same Bishops’ palace chapel where Karol Wojtyla was ordained in 1946 and where he prayed throughout his years in Krakow. I had no idea that the next few days were to be just as special. Looking back, I see the smiling faces of the youth packed up to the ceiling in the blue streetcars, the colourful flags flowing through the cozy streets surrounding market square, a sense of all being united – a great contrast in a world where news channels tend to feed us with pictures of fear, violence and destruction. 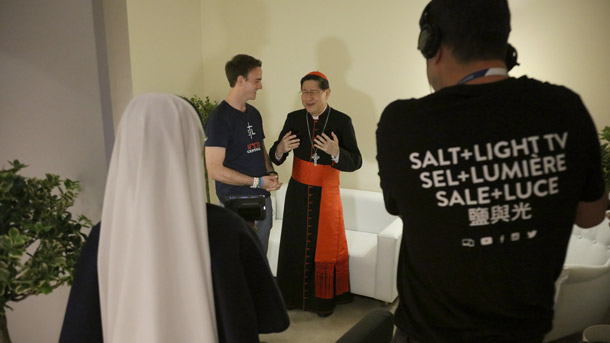 My personal highlights include meeting Cardinal Tagle and filming an intimate interview with him. I recall his story he later told on stage at the Tauron Arena how not too many people wanted to follow him when he was just a young man studying to be a priest, but later he had crowds behind him as Bishop. He warned about not evaluating people based on their success or lack of, but seeing everyone’s worth and potential. Pope Francis also summoned young people to get off the sofa and to leave the artificial comforts and make a mark in the world instead. 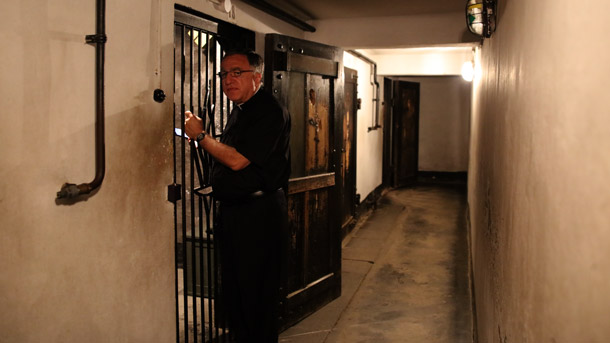 Then there were the more personal and spiritual moments where I was suddenly a pilgrim and not just a camera operator. One of those moments was experiencing the Way of the Cross at Blonia park with our crew. Another was seeing Father Rosica reflect and pray holding the cell bars in a dark cellar where Maximilian Kolbe, a young Franciscan who volunteered to die in place of a stranger, was starved to death at Auschwitz. There were no glamour lights set up, no rehearsals. Just Father Tom speaking from the heart with a single, dim light bulb over his head. On the second to last day we could not access the Vigil service by vehicle. Due to heightened security, all the roads were closed and our media passes did not help this time. Chris Adamczyk, a talented photographer, Emilie Callan, a skilled producer and reporter and Piotr Goryl, a Knight of Columbus from Krakow with a heart of gold, all joined me in a two hour hike to the site. Suddenly, that sunny afternoon we were just like the sixteen and seventeen year-olds, surrounded by a crowd on a blocked off road, with smiles on our faces. We did not know how long our walk would take, but it felt like part of the service already, with songs being sung and laughter all around. The evening candle lit Vigil with a striking sunset in the background was a powerful image that I will not forget for a long time. The theme of Mercy and the words “Do not be afraid,” spoken by John Paul II could not have been better visually translated than the thousand candles piercing the darkness with light. It is as though the young pilgrims rebelled against all the evil in our society. They rebelled with Courage, Mercy and Light. Light of goodness and hope. 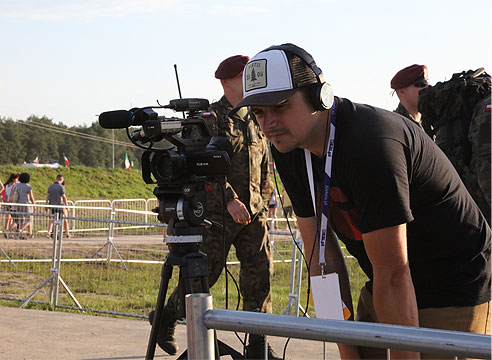