Pope in UK: A few thousand Masses and Rosary Decades for the Holy Father

Thirty one thousand decades of the Rosary and one hundred and thirty days of Eucharistic adoration. 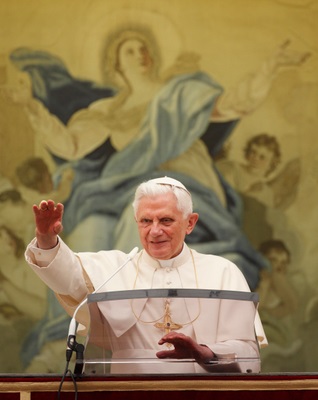 That's the amount of prayer that benefactors of the charity Aid to the Church in Need have pledged to Pope Benedict XVI. For those of you keeping count, that prayer total works out to more than six months of continuous prayer. And that doesn't include the eleven thousand Masses that will be offered for the Holy Father! ACN organized the "prayer-action" for the Pontiff in anticipation of his visit to the United Kingdom, September 16th-19th. Those who participated will have their name added to a book that will presented to the Holy Father during his Apostolic journey. Aid to the Church in Need is an international Catholic charity that helps suffering and persecuted faithful worldwide.  You may have even seen some of their television programs on Salt + Light. Some of their projects include training for seminarians and aid for Iraqi Christian refugees (as a side note:  though not related to ACN, Toronto's Archbishop Thomas Collins has recently encouraged Canadians to support the latter group). Visit Vatican Radio HERE to learn more about ACN's "Prayer-Action" for the Pope and the Papal visit to the UK. - CNS photo/Paul Haring