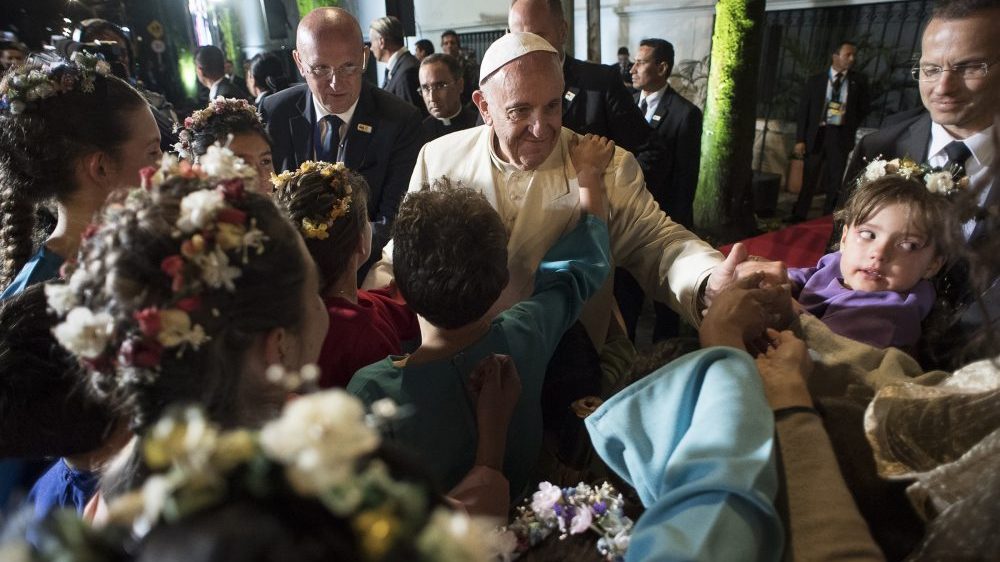 Pope Francis greets victims of violence outside the Vatican nunciature in Bogota, Colombia, Sept. 8. (CNS photo/L'Osservatore Romano)
Some of the most moving encounters that the Holy Father had in Colombia went mostly under-reported. Some of these took place each evening at the Apostolic Nunciature in Bogotá, where he was staying. At the gathering with Priests, Seminarians, Men and Women Religious and their Families in Medellin yesterday, Pope Francis mentioned one of these encounters. He spoke about a young girl, Lina María, with special needs he had met the night before. In her message to the pope she spoke about the importance of acknowledging vulnerabilities. The pope made her repeat that statement and then explained that all of us are vulnerable. The pope then asked her who was the one person who is not vulnerable. She answered, “God.” The Holy Father then told those at the gathering that even though God is not vulnerable, he made Himself vulnerable. This is one of the cornerstones of Christianity. This morning, ACI Prensa reported that Pope Francis had another encounter with a vulnerable woman that deeply affected her. In fact, it changed her life. Consuelo del Socorro Córdoba suffered an acid attack in 2001. The man, who used to be her husband, in a jealous fit, threw sulphuric acid on her face. Her plan was to euthanize herself because of the great suffering she endures daily. Yesterday she met the pope and decided to live. Consuelo also suffers from toxoplasmosis, an infection that affects the brain. In an interview with CNN Español she said that she has endured 87 surgeries and still has six more to undergo. She cannot eat solids; she can only consume liquids and still needs thousands of dollars for the remainder of her treatments. “I was the first in line and the first one that the he greeted,” she said about meeting Pope Francis. “He hugged me, I gave him the gift. I am happy. I told him that I was going to have euthanasia (and) to help me, and he told me, no, not to do that. He told me that I was very brave and very beautiful.” She added that this meeting totally changed her: “Now I do want to live and I need the whole world to know it.” “Thank God that this miracle took place; that I could be here. I planned to end my life on September 29. I have the letter… (The doctor) was going to give me the injection, but I am not going to do it now.” 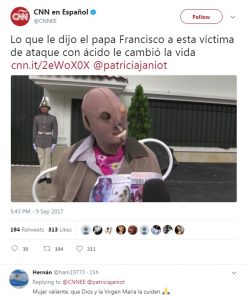 Consuelo also asked for help getting out of the poverty she lives in. She lives on a subsidy of only the equivalent of about $30 (a month). “Now,” she said, “I want to dream about many things: home, work, everything, because I am not going to die.” She concluded by saying that she gave the pope her heart and that she “bought him a beautiful thing, like a beautiful heart and (a) documentary, the euthanasia letter, everything, so that he can watch it in Rome.” To Lina Maria and those children with disabilities that the pope met on Friday night the Holy Father said, "God is the only one who is not vulnerable, all the rest of us are vulnerable. That is the essence of being a human, that need to be sustained by God. All of us. That is why we should not discard anyone, because each one of us is a treasure that is offered to God so that He can make it grow according to His will." To watch all our coverage of the Pope’s visit to Colombia and to read the English translation of all the Holy Father’s speeches and homilies, visit our Apostolic Journeys section. For more information about Euthanasia and Assisted Suicide, go to our blog to find various articles and programs.