This blog comes to us from Marie and Andre Brunet of Winnipeg, Manitoba who are attending the VII World Meeting of Families.
Milan, Italy -  Here we are!  Today was the first of the three days of meetings on many topics regarding the family.  This part of the week takes place at Milan’s Conference Centre and is attended by nearly 6,000 people from the five continents.  Other than the very obvious Italian presence, there seems to be quite a big representation from Latin America. We also met many participants from Quebec: There are 38 of them, who came together as a group, representing their parishes and dioceses. This morning, after the official welcoming from Cardinal Angelo Scola, archbishop of Milan and Cardinal Ennio Antonelli, president of the Pontifical Council for the family, we heard the first conference, given by Cardinal Gianfranco Ravasi: “The family, a work of creation and a celebration of salvation”.  He spoke of the family, using the symbol of a house, identifying the relationship between the couple as the foundation, and the children as the “living stones”.  He also referred to three rooms in the house: The first, the room of suffering or pain, which he explained “the Bible itself is a constant witness of this”, from the Old Testament starting with Cain and Abel, ending up with Jesus who “knows the anxiety and tension of the families, using them in His parables”.  The next room is the room of work, or labor, which he explained is sometimes adjacent to the room of suffering, but from which good comes.  The last room is the one of the feast and of family joy, and this joy is essential for the life of the family. There were a number of other presentations during the day, focusing on the importance of family and the need to find a balance between time and energy spent on work, consumerism, media and the family.  All the talks were very interesting, however amid all the official speeches, the family symbolized as a house really stood out for us, perhaps because of the simplicity of the image, as well as our ability to relate to the three rooms of the house that were explained. 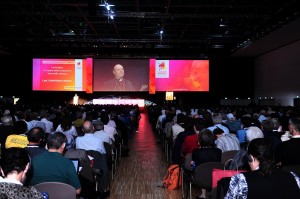 We also spent a big part of the day meeting others participants!  A few that stood out were a couple from Cork, Ireland (where we will be heading to next!) who are representatives of the Retrouvaille movement (www.retrouvaille.org).  I met them in the line for coffee in the morning and their Irish hospitality shone through as they not only offered to help us in the effort to establish Retrouvaille in Manitoba, but also invited us to stay at their house in Cork!  Then there was Donatella Vigorelli, whom we met at lunch. She is the foundress of the Marco Vigorelli Foundation (www.marcovigorelli.it), an organization in Milan that supports the family.  She explained that the reality in Europe is that people no longer have time to spend as a family. Most people leave home at 8 AM to return home only at 10 PM.  She told us that someone who works only till 6 is said to have worked half a day!  Later, we spent time with a wonderful couple from Amos, Quebec: Hugo and Chantal Paquin.  They came with their bishop, to not only experience the World Meeting, but to bring back the fruits of their experience to their diocese. 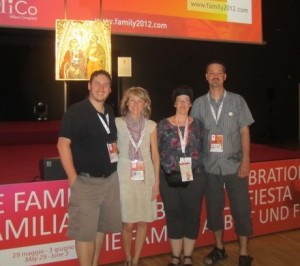 Hugo and Chantal shared with us that they were interviewed by a local journalist before they left home and had been referred to as a couple that was quite out of the ordinary, being happily married for 14 years, having three children and being actively involved in their parish. One last family that we met today came all the way from Australia, travelling 24 hours to arrive in Milan – and this is no small family: Two parents, six children, 10 and under, and the two grandparents as well!  We were quite impressed with their courage as it is surely no small feat to travel such a distance in such great numbers! It’s been a great day, and we look forward to the next. Buonanotte da Milano. Ci vediamo domani! Marie and Andre Brunet --- Photos courtesy of VII World Meeting of Families Milano and Marie Brunet