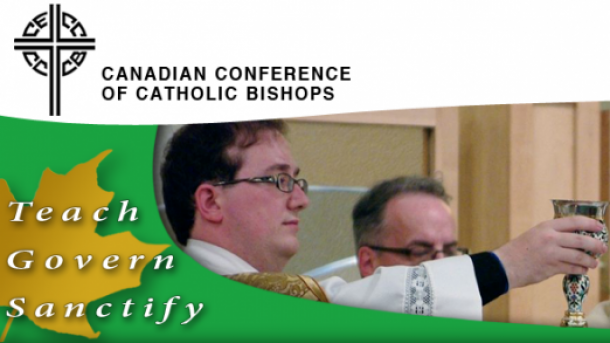 The following is the address given by Archbishop Richard Smith of Edmonton, President of the Canadian Conference of Catholic Bishops, to his brother bishops at the opening of the plenary assembly of the CCCB.

My brother Bishops, guests, and members of our staff,
On February 11th of this year, a photographer captured a lightning bolt striking the dome of Saint Peter’s Basilica in Rome. The photograph immediately circulated around the globe. The event was widely seen as symbolic of the jolt given to the entire Church that same day by the announcement of Pope Benedict XVI’s resignation from office. Few of us will forget that day. For eight years we had loved and followed him as our Holy Father, and were eyewitnesses and beneficiaries of an extraordinary papal magisterium. In Pope Benedict XVI both Church and world were blessed with a wonderfully gifted teacher, who in every letter, speech, message and homily of his Petrine ministry explained the faith in a manner at once intelligible and attractive. His personal qualities that lay beneath and gave shape to his ministry came undeniably to the fore in his act of resignation: humility, simplicity, courage and complete self-surrender for the good of the Church. Many members of our Conference participated in liturgical celebrations to give thanks to God for the gift of Benedict XVI, aware that, once again, God had blessed us with a giant of a Shepherd, and confident in the knowledge that the Pope’s legacy will continue to nurture the Church for many generations to come.
Shortly thereafter, the Church called out in prayer to the Holy Spirit to guide the choice of a new pontiff. In response we 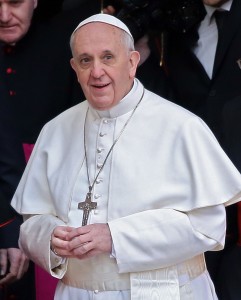 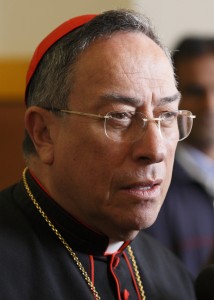 Maradiaga and Mr. Michel Roy, respectively President and Secretary General of Caritas Internationalis. Their presentations on the presence and ministry exercised throughout the world by Caritas will provide the basis for our own discussions on the relationship of our Conference to the diakonia of charity within our own country.
Of course, our pastoral concern and service of love extends far beyond our national borders. For years we have worked through the Canadian Catholic Organization for Development and Peace and the Catholic Near East Welfare Association in service of our sisters and brothers in various peripheral situations throughout the world. Of most recent concern is the situation in the Middle East. In May of this year I joined on your behalf with the leaders of other Churches and ecclesial communities in Canada in signing a letter to the Prime Minister. This letter from the Canadian Council of Churches expressed our concern for the countless suffering people throughout the region, and asked for whatever action or pressure would be possible to help them. Most acute at the moment is the situation in Syria, and we have partnered with Development and Peace in response to the plight of the people there. Working in tandem with CNEWA and Jesuit Relief Services, Development and Peace will use funds raised in our national collection to support the work of sister Caritas agencies. As you know, when this financial campaign was launched last June the Bishops of Canada called for a national day of prayer and fasting for peace in Syria to be held across our country on September 14th, the Feast of the Exaltation of the Cross. Since that time Pope Francis called for such a day to be held universally on September 7th, the vigil of the Birth of Mary, Queen of Peace. Thus have we been blessed recently with the opportunity to mark two days of prayer that, with the help of the intercession of Our Lady, the power of the Cross will bring to Syria and the entire Middle East a true and lasting peace. A session led by our Episcopal Commission responsible for ecclesial and interfaith relations will guide our discussion of what more might be done to promote better understanding in our dioceses, especially in view of how the Middle East crisis has affected relations among faith communities.
Upholding Religious Freedom
Hope for the beginning of a new and peace-filled life in the Middle East is buttressed by the story of the Church currently unfolding in Ukraine. Last month, I visited that country in the name of the Conference for an event of truly historic proportions. For generations, the Greek Catholic Church in that land lived not just on the peripheries but was actually forced underground. Until liberation in 1991, this Church lived and worshiped in the catacombs. Yet in August of this year, as they marked the 1025th anniversary of the baptism of the people of Kyivan-Rus’, their Major Archbishop, in the presence of thousands of clergy, religious and faithful from around the world, consecrated a magnificent new cathedral on the eastern bank of the Dnieper River. Appropriately, this wonderful new edifice has been named the Cathedral of the Resurrection of Christ. This event was testimony to the power of faithful witness. Through the resilience and fidelity of the Ukrainian people in the course of many years of tyranny and oppression, God has fashioned a new beginning full of hope.
As I mentioned to the Ukrainian Bishops when I addressed their Synod, I believe their example can serve as an inspiration to us in Canada. In admittedly different circumstances, the Church is needing to confront in our own country pressures 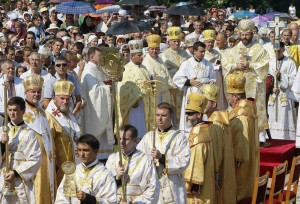 seeking to relegate us to the margins. This is turning the question of the relationship of the Church to the periphery on its head. In virtue of our Gospel mandate, the Church willingly goes to people on the margins to affirm their dignity and foster their full inclusion in society. Yet as we go to the edge, many seek to keep us there, even push us over. The question of freedom of conscience and religion, and the contribution of the voice of the Church to the common good, was addressed in 2012 by the Permanent Council in the document dedicated to this topic. The concerns remain actual. Therefore, under the guidance of our Episcopal Commission for Doctrine, we shall once again give serious attention to this in the course of our plenary gathering. The trends we see are worrying, yes, but hardly surprising. For the Church faithful to her Lord it was ever thus. The fidelity of our sisters and brothers in Ukraine and elsewhere in the face of their suffering encourages us to be faithful and steadfast, confident that the Lord will turn all to the good.
Anniversaries
Together with the attention we give to these many pastoral concerns, we shall also have occasion to mark in the course of our plenary some significant anniversaries. This year we mark the 50th anniversary of Pacem in Terris. We have asked our Episcopal Commission for Justice and Peace to lead us in a reflection upon this document and its importance for us today. In 2013 we also have an anniversary of particular significance for the CCCB. Our Episcopal Conference was founded 70 years ago. We will mark this with a celebratory dinner to which our Past Presidents have been invited and at which two of them will share some memories and insights.
The Administration of the CCCB
Of course, the work of the Conference relies heavily upon a competent and efficient General Secretariat and support staff, working together in a financially sustainable manner. The last two years have seen an intensified effort at reorganizing the General Secretariat of the Conference. This has involved both cost reductions wherever necessary and new investments in areas hitherto neglected. For example, our annual payroll has been reduced by a net amount of more than $945,000.00. Over $250,000.00 was spent on upgrading our information technology, something that had not been done in fifteen years. These latter changes have made it possible for us to transmit up to the minute details to our dioceses concerning important events in the life of the Church. We are now able to broadcast important events in Rome on our website, thanks also to the collaboration of Salt and Light Television. As you know, it would be impossible for the Executive and 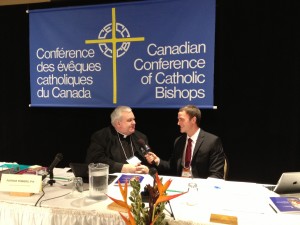 Permanent Council to carry out our duties without the help of many people, especially the professionals who work for the Conference. On your behalf, I extend to them our heartfelt thanks for their dedication and hard work in providing support to all the Bishops of our country.
Conclusion
At World Youth Day in Brazil, more than 1000 Canadian delegates were part of an assembly of nearly four million that heard Pope Francis echo the call of our Lord to go forth and make disciples. In the context of that extraordinary event, he met with the Bishops of Brazil, and spoke of the need of countless people in the world today, specifically the need “to be reached by the merciful gaze of Christ the Good Shepherd, whom we [as Bishops] are called to make present”. Clearly, those same words could be addressed to us, as we consider the countless men, women and children of our own land who need to encounter and be given hope by the loving and merciful countenance of Jesus. May our time and deliberations together this week strengthen us in the fulfillment of our call to make Christ present and to announce, not only at the peripheries but also in every circumstance and at all levels of our society, the new life and hope that Jesus alone can give.