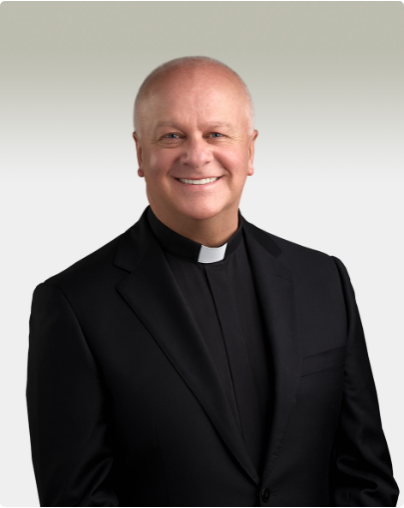 Chief Executive Officer
Father Alan Fogarty, SJ, began as CEO of Salt + Light Media on August 1, 2020. This undertaking follows a number of prior achievements in leadership roles, particularly in the field of education.

Father Fogarty was ordained to the priesthood at the Jesuit parish of Our Lady of Lourdes, Toronto, in May of 1998, after earning degrees in the fields of philosophy and theology. After completing tertianship (the final formal phase of Jesuit formation) in Calera de Tango, Chile, he did advanced degree work in leadership and administration. Over the years of his apostolic service, he has held various leadership positions in Canada and the United States. Most recently, as President of the Gregorian University Foundation (2014-2019), Father Fogarty was a member of the Interprovincial Roman Houses, a group of Jesuit residences and apostolic works that date back to St. Ignatius of Loyola himself and that are to this day directly dependent on the Superior General of the Society of Jesus. Father Fogarty successfully led the Foundation in raising funds for three Jesuit institutions of higher learning in the Eternal City: the Pontifical Gregorian University, the Pontifical Biblical Institute, and the Pontifical Oriental Institute.

As President of St. Paul's High School in Winnipeg (2006-2013), Father Fogarty energized the community through major fundraising efforts, including an increase that more than doubled the institution's bursary fund in an overall $22-million fundraising effort. As part of the same capital campaign, Father Fogarty led the effort to build the Paul Albrechtsen MultiPlex, a state-of-the-art building combining athletic facilities, classrooms, and an alumni lounge, and renovated the 1963 building and the 2000 Angus Reid Wing.

A Dynamic Vision for the Church

Steeped in Ignatian spirituality and committed to the apostolic work of the Church, Father Fogarty has a strong background in organization and visionary leadership. In keeping with Catholic social teaching, Father Fogarty focuses on issues of integral ecology, peace, justice, and an ever-deepening relationship with Christ, the Church, and peoples of all cultures and religious beliefs.

As a Catholic priest and, characteristically, as a Jesuit, Father Fogarty emphasizes a strong loyalty to the Holy Father's ministry and is committed to positioning Salt + Light Media's resources to achieve a faithful understanding of the Church's teachings, especially with respect to Pope Francis' latest encyclical letters, Laudato Si' and Fratelli Tutti.

As CEO, Father Fogarty is committed to expanding the organization's reach to a global audience. His plan is to build a strong team of media artisans who are fully aware of current events in the Church and the world and willing to think critically, engage in dialogue, and seek out the best information available for its viewers, listeners, and readers. Father Fogarty hopes to bring to Salt + Light Media a range of high-level, faithful, and balanced perspectives.

Above all, Father Fogarty is motivated by the desire to shape a hopeful narrative for the Church in our time as the community of the faithful seeks to break away from a culture of division, isolation, and alienation. Under his leadership, Salt + Light Media is dedicated to highlighting what is right with the Catholic Church, what is good in the world, and what causes the human spirit to soar. As a leader, he expects his team to bring these often-hidden stories to the forefront and seeks to provide the resources to facilitate these goals. Leading a team filled with skilled and discerning individuals, Father Fogarty wants to take full advantage of the capabilities of a modern multimedia platform to continue the work of the New Evangelization, which is to proclaim the Good News of the Lord Jesus Christ to the ends of the Earth.