[The following article was written by the Supreme Knight of the Knights of Columbus Carl Anderson, and originally appeared in the Monday March 26th edition of Zenit.] 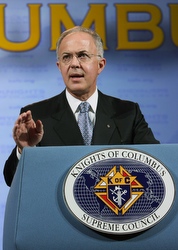 Twenty-five years ago, Pope John Paul II inaugurated the celebration of World Youth Day -- to be celebrated on Palm Sunday each year. He understood -- as does Benedict XVI -- that the future of the Church depends on the youth, on the next generation of Catholic parents, priests and religious. But reaching the next generation is not always easy -- especially when young people today are inundated with messages that push them toward a "relativistic" view of morality, toward a value system in which relevant values are chosen on an individual basis -- and are not thought to be universally applicable. It was this relativistic interpretation of living that Pope Benedict spoke out against in the days just before his election as Pope -- when he warned of a "dictatorship of relativism." There is certainly a problem with relativism among young people today. A recent Knights of Columbus/Marist poll found that 82% of 18-29 year old Catholics see morals as "relative." That's a shocking number, but fortunately there is more to that statistic than meets the eye. First, the majority of "practicing Catholics" disagreed, and second, the 82% who see themselves as relativists nevertheless don’t consistently apply relativism to moral issues. When confronted with a series of moral issues, those same Catholic young people who saw themselves as relativistic chose overwhelmingly to categorize issues such as abortion or euthanasia as "morally wrong" -- despite being given the option of classifying each as "not a moral issue" -- which one would assume would be the logical choice of a true relativist. Inconsistencies Relativism, unlike truth, leads to exactly such inconsistent thinking, and so ultimately is not a fulfilling philosophy of life. Overcoming the allure of relativism with a message of truth has been a consistent project of Pope Benedict. Again this weekend, on the 25th celebration of World Youth Day, the Pope took the opportunity to address the young people in St. Peter's Square for his Palm Sunday Mass on the subject of leading a life based on truth. At the Angelus following the Mass, he appealed "to the new generations to bear witness, with the mild but luminous power of truth, that the men and women of the third millennium may not lack their most authentic model: Jesus Christ." Truth -- in the person of Jesus Christ -- must be the basis for witness to the faith. It’s a simple, yet profound statement. But to witness to the truth that is Christ requires a relationship with him. As then Cardinal Joseph Ratzinger pointed out ten years ago in an address to catechists and teachers that the art of living "can only be communicated by [one] who has life -- he who is the Gospel personified." We cannot expect to change culture or influence people if we ourselves do not present an authentic witness to Christ, whom we know personally. And we cannot expect young people to witness effectively to their peers unless they have first developed a relationship with Christ that they are able to present in a very real way. On Palm Sunday, the Pope also reiterated "to all the young men and women […] that being Christian is a journey, or better: It is a pilgrimage, it is a going with Jesus Christ, a going in that direction that he has pointed out to us and is pointing out to us." This is not to say that being a faithful young Christian in the face of peer pressure is easy. Be not afraid The Pope recognized this in his remarks when he said: "Do not be afraid when following Christ leads to misunderstandings and affronts. Serve him in the weakest and most disadvantaged people, especially your own peers in difficulties." There are many reasons such a message can resonate with young people. Who -- even among relativists -- could oppose or not be moved by the witness of one of their peers helping those in need? It is the preaching by deed more than by word that can often have the greatest effect. In contrast, the Christian message of love of God and neighbor is both consistent and fulfilling. What it requires to be accepted by those searching for answers in their lives is the effective witness of their peers and of the previous generations. Only in light of the truth does the passion of Christ, which we celebrate this week, make any sense. Under a relativistic interpretation, Christ’s death for others is senseless -- unless he died only for himself -- since the rest of humanity would have no need of him, or of salvation. Our job is to bring the truth to those young Catholics searching it, to the two in three in the recent Knights of Columbus/Marist poll who expressed openness to learning more about their faith. In witnessing to the passion, death and resurrection of Christ, let us bring into our hearts that love of God and neighbor so that we can effectively share it with our peers, and with future generations. Let us take as our own the words of St. Francis: "Preach -- and if necessary, use words." - CNS photo/courtesy Knights of Columbus