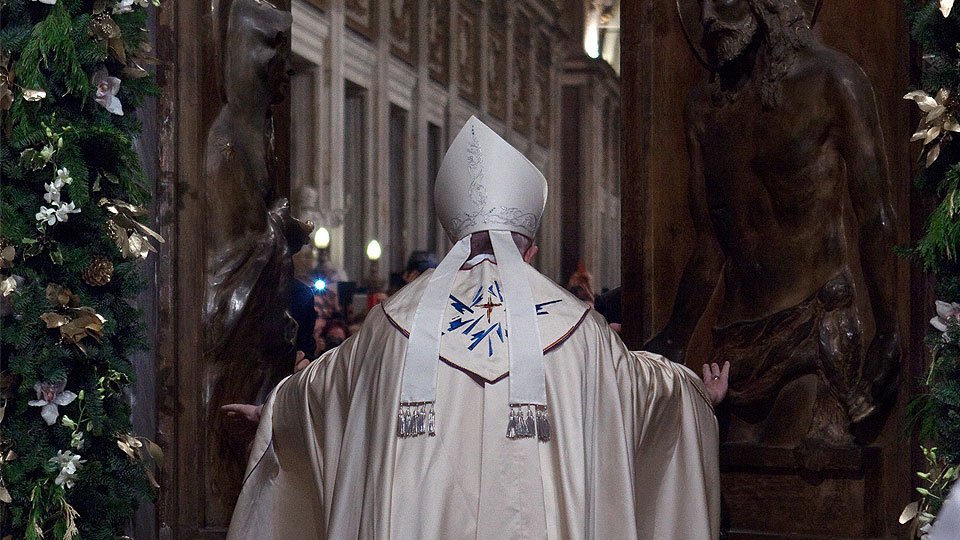 CNS photo/Maria Grazia Picciarella, pool
There are only ten days left before the conclusion of this Year of Mercy. On November 20th, the last Sunday of the liturgical year and the Solemnity of Our Lord Jesus Christ the King, Pope Francis will close the Holy Door in St. Peter's Basilica. This Sunday, November 13, all the other Holy Doors across the world will be closed in the dioceses. This includes the Doors in the other three papal basilicas: St. John Lateran, St. Paul Outside the Walls and St. Mary Major. The ritual will take place this coming Sunday. The papal delegates closing each door are: the vicar Cardinal Agostino Vallini, who will lead the ceremony at Saint John Lateran; Cardinal Santos Abril y Castelló, Archpriest of the Papal Basilica of St Mary Major, who will lead the ceremony in that Basilica, where the Holy Father goes to pray before an apostolic voyage, and Cardinal James Michael Harvey, Archpriest of the Papal Basilica of St. Paul Outside the Walls, who will chair the ceremony in that same church. The closing of the Holy Doors happens in two stages: the first is the true closing rite itself and the second is walling up of the Holy Door in all four basilicas a few weeks later. The rite in St. Peter's Basilica consists of the Pope arriving at the Holy Door, he then goes up the stairs in silence, and then kneels in the doorway to pray. Once he gets up, the Holy Father closes the two sides of the door and, as he descends in front of the closed door, the crowd hears the acclamation, in song, “Christus heri et hodie, Finis et Principium; Christus Alpha et Omega. Ipsi gloria in sæcula”. The song accompanies the path of the procession to the altar, where Pope Francis will preside the Mass in St. Peter's Square. In all four Papal Basilicas in Rome the rite also consists of parchment, on which is written the date of the official opening and of the official closing of the door, as well as signatures of those present. The rite also includes placing coins in an urn: a gold one for the Pope, four silver coins for each year of the Pope’s pontificate, and fifteen bronze coins for each year since the last Jubilee, as well as placing the parchment itself. Then there will be the walling of the urn in the wall of the Holy Door and the reading of the "deed" certifying the masonry. On the bricks walled in the doorway, there is an inscription in Latin with the Pope's name - or of the delegated Cardinal - who closed the door, and the year of the Jubilee.

For more on the closing of the Extraordinary Year of Mercy, catch Vatican ConnectionsFridays at 8 pm ET!