WYD08: Bridges in the Southern Land 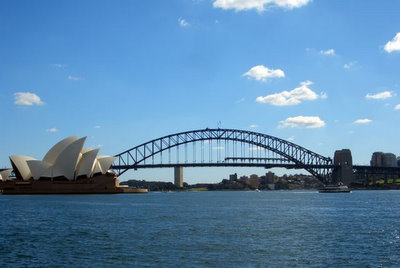 Do you know that Australia was first named the "Southern Land of the Holy Spirit"? In fact, that's what Australia means: "Southern Land" - Austral is southern. Boreal is northern. Learn something new everyday. Is it any coincidence that the theme for this year's international World Youth Day, hosted in Sydney, Australia is from Acts 1:8 - "You shall recieve the power from the Holy Spirit and you shall be my witnesses..." Is it any coincidence that one of the most recognised images of Sydney is the bridge over the Sydney Harbour - a bridge... and that the Pope's title, pontifex, means bridge builder. That is what the Pope is: a bridge-builder. In many ways that is what World Youth Day is too: an opportunity for bridge-building - bridge-building between the young and the old. Bridge-building between the laity and the hierarchical Church. Bridge-building between the people of God and the God of Love. And, isn't that what happens when we are clothed by the Holy Spirit? Yes we become witnesses, but our witness makes us builders of bridges. I love that about the Catholic Church, the religion of symbols. Guess what the Latin word symbolum" means? It means, "to bring together". It's the opposite of the word "diabolum" (where the English word "diabolical", as in "the devil" comes from), which means, "to separate". Everthing about our Faith is to "bring together". Isn't that what Communion is about? And that is what World Youth Day is about: a coming together to celebrate and learn about our Faith; a coming together of the Pope with the young people of the world; a coming together of various levels of government, agencies and local institutions, to put together a world-class event; a coming together of pilgrims under the Cross, together with Mary and the Saints, in a spirit of reconciliation... in Communion with each other and in with Christ.