WYD08: A Lesson from Lawrence 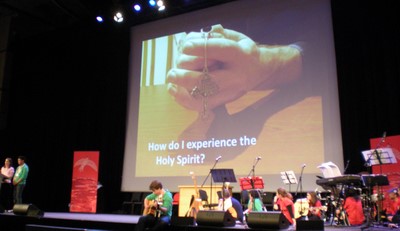 Today there was no major papal event, so we were able to take this time and have some of the regular pilgrim experience – just participate! Catechesis sessions and the Youth Festival started today, and it’s been my most enjoyable day so far. For the catechesis sessions on the Holy Spirit, Pedro and I decided to go to the Sydney Centre, where at least 5 catechesis sessions were taking place. The one I sat in on had Cardinal McCarrick, an American, speaking to a crowd of over 2,000 people. We bumped into Canadians from all over – New Brunswick, Nova Scotia, and parts of Ontario (Windsor, London, Toronto). My favourite part was the Question and Answer session. The late Pope John Paul II had said that the World Youth Day catechesis sessions are more for the bishops to be evangelized than to evangelize. That’s because the young people remind them that their job is not so much "administrative" work as it is reaching out to the young, the future of the Church, and passing on the faith to them. One young Canadian asked, "Your Eminence, how can we keep being happy when we are persecuted for our faith?" Cardinal McCarrick replied with an anecdote, "When St. Lawrence was being martyred for his faith, he was being grilled alive. Now he chose to face this horrendous situation with humour and replied, ‘Turn me over, I’m done on this side.’ He could do this because of his prayer life and his closeness to the Spirit."