WYD RIO From Behind the Scenes in the S+L Studios 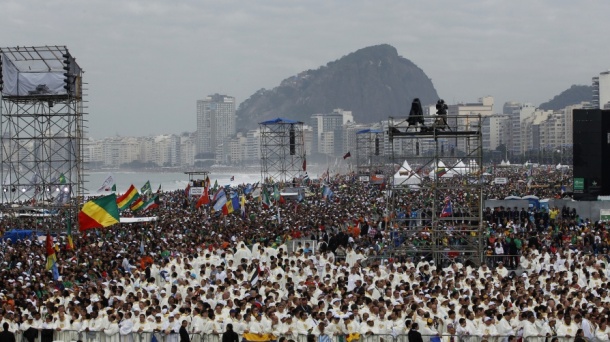 For those who wanted to participate in WYD but were unable to come to Brazil, the opportunities to watch the events in the secular media were painfully few and far between. Although sound-bites were occasionally scattered throughout the news, it was clear that the global appetite to understand the context of the Pope’s trip to Rio wasn’t being satisfied by the mainstream media. Our humble little television station here in Toronto, is a witness to that un-served need. While our crew of 12 S+L’ers was on the ground tirelessly producing and covering the events from Rio, our support team in Toronto noticed some interesting statistics amidst the bustling activity here at the studio. During that one week during WYD we realized that: In addition to all this, our broadcast feeds were carried by many large groups across many cities on big screens at churches, events and other gatherings. Unfortunately, we have no way of getting an accurate estimate how many people were actually watching the events on S+L during the past week. Our social media channels were fluttering with messages of support, tweets, retweets and mentions from people all around the world and including many “virtual-pilgrims” from the Philippines, Romania, South Africa, Moldavia, Bosnia Herzegovina, Australia, Ireland, France and many others. Not surprisingly, all this unanticipated demand created extraordinary traffic on our website causing it to crash a few times during the week! This certainly kept our technical team on high alert 24/7, causing many of the team to work 18-20 hour days to ensure smooth delivery of our programs for our viewers on the network and on the internet. Finally, even more surprising for us here at S+L, was the unexpected move of the major Canadian cable companies to simultaneously offer a four week free-preview of the S+L channel to all their viewers making our coverage of the WYD events available to all Canadians at no cost. At the end of the day, the one thing I’ve come to learn through the joyous chaos of the past week, is that World Youth Day is not only for the youth who attend in the city that the events occur. It’s for all and it’s for everyone.  Regardless of age, race and religion. It is especially for those searching the digital continent for truth and inspiration and it is truly our responsibility, our mission to evangelize the Faith and the message of the Holy Father, on all media platforms! Without a doubt, it’s been a grueling and a rewarding week for all of us at S+L. From the tireless producers and on-air personalities to the support team and all volunteers behind the scenes. Despite all that however, it has been an experience of a lifetime and we are certainly looking forward to doing it all over again for WYD 2016 in Krakow. After all, who's responsibility is it to be salt of the earth and light of the world if not our own? Noel Ocol is Director of Marketing and Communications at Salt and Light Catholic Media Foundation.