In the last 24 hours here in Madrid, I have found myself in the middle of a swarm of Brazilian pilgrims, I got caught in an Italian traffic jam, had lunch with a group of young pilgrims from Ciudad Real, Spain a.k.a. "the land of Quixote," as one pilgrim explained, and had my eardrums blasted by a suspiciously vuvuzela-like instrument being played by Australian pilgrims. The highlight -- so far -- was the meeting with 6,000 Canadians at the Palacio de Deportes. 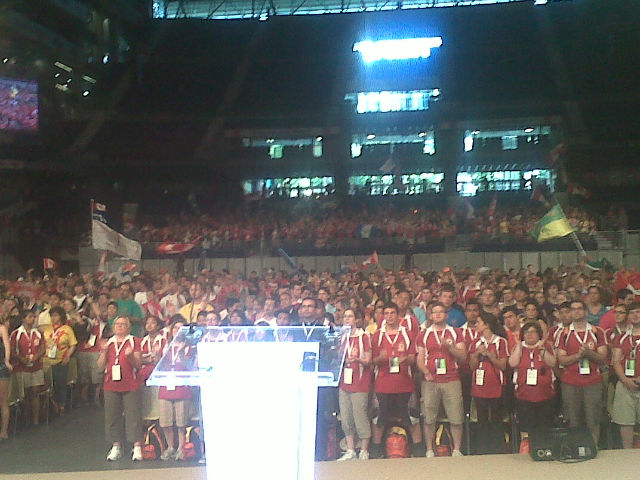 Canadian WYD volunteer Kyle Ferguson spoke a little bit about what it's like to be on the inside at WYD (totally crazy) and why anyone would want to do that (answering God's call). Kyle was also a volunteer at WYD 2002 in Toronto and was one of the young people who helped carry the cross from Montreal to Toronto. Kyle was also part of the group that took the WYD cross to Ground Zero in New York. That same cross was carried into the Palacio de Deportes this morning along with the icon of Mary. Fr. Robert Galea, a young Maltese priest working in Australia performed a couple of songs from album, or rather led the pilgrims in musical prayer. Fr. Galea sang at the end of the Stations of the Cross at WYD 2008 in Sydney. Archbishop Terrence Prendergast, S.J. of Ottawa gave a final blessing and commissioning before the Canadians left the floor to make way for the Australian pilgrims and their vuvuzelas.