WYD Cross and Icon of Mary head to Brazil 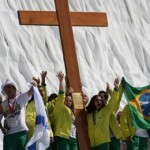 This coming Sunday, the Archdiocese of São Paulo and the National Conference of Bishops of Brazil (CNBB) will host the first preparatory event leading to World Day Youth Day 2013.
The event will mark the arrival to Brazil of the WYD Cross and the Icon of Our Lady. It will be attended by the Archbishop of São Paulo, Cardinal Odilo Pedro Scherer, the Apostolic Nuncio to Brazil, Dom Lorenzo Baldisseri and the president of the CNBB, Cardinal Dom Raymundo Damasceno. The missionaries Canção Nova ('New Song') will be in charge of animation. The event will feature testimonials from young people who participated in previous WYDs, theatrical performances, the official launch of the Rio 2013 website, as well as performances by various well-known Brazilian Catholic singers such as Fr. Fábio de Mello, Father Reginaldo Manzotti, Father Juarez Castro, Dunga, Life Glitters, Eliana Ribeiro and others. [Read more...]