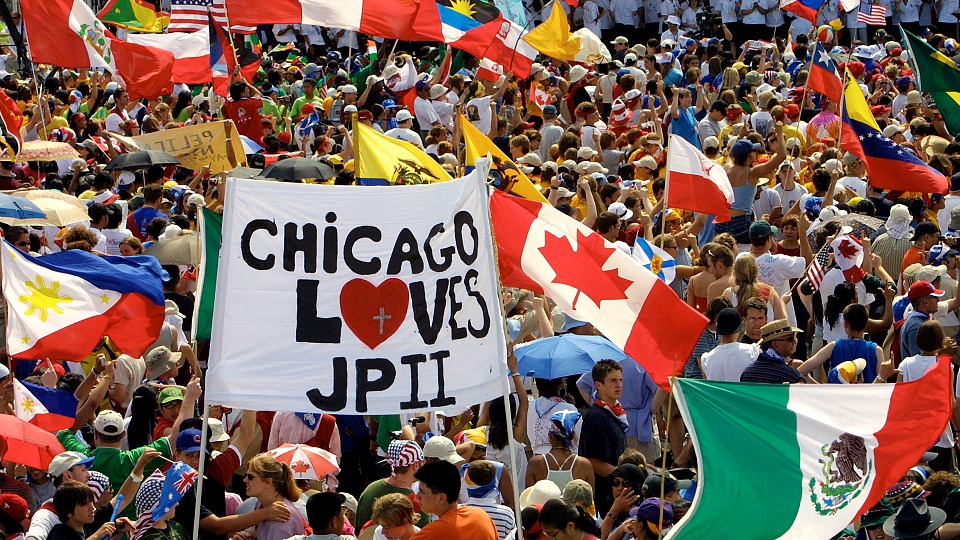 On a Friday night in July 2002, during the World Youth Day celebration in Toronto, I was standing just down the street from the Royal Ontario Museum. As a member of the World Youth Secretariat under the Ministry of Housing and Municipal Affairs, I was assigned to stand by a viewing area for local dignitaries as the Way of the Cross came slowly up University Avenue. Barriers were installed to keep the crowds off the street, but from where I stood I had complete access to the procession. It was a warm night, one of many in a hot summer, and I stood, one among a hundred thousand, wondering just what this was all about. I’m not Catholic, and the body I worked with, the World Youth Secretariat, was comprised of Catholics but also Jews, Agnostics, Muslims, you name it. Even in the months leading up to WYD in my role with the WYS I had no real idea what was in store. And this night, with thousands upon thousands of pilgrims behind me, I felt a bit like a stranger in a strange land. The procession continued onward but was nearing its conclusion and the palm fronds many participants were holding occasionally fell to the street. I didn’t notice at first but pilgrims behind the barriers were signaling to me, some speaking, others waving to grab my attention. I quickly realised they wanted me to hand them the fallen fronds. I spent the evening doing this. Passing palm fronds to pilgrims. By clothing and accents and flags on bags I could tell they were from all corners of the earth. I spoke to many, fumbled through French with others, shook hands and shared smiles with even more as I handed over the fronds. I made friends – a lot of them - and I made memories. I joined Salt and Light TV only recently. I’m the new guy in the office, and we’ve just moved uptown, making me that much more off-balance and disoriented in my new role. However, seeing as Salt and Light was born from World Youth Day and because of my involvement, I can’t help feel like I’m not quite the new guy; like I have roots in S+L; like there’s a connection, one created on a warm July evening more than sixteen years ago. It’s a new beginning for me, but one with a bit of history. Merry Christmas and Happy New Year, everybody! Mark Umland