I admit, I was a little disappointed when Spain beat the Netherlands in yesterday's World Cup final.
That's mostly because I was cheering for Germany -- and Spain defeated them last week! 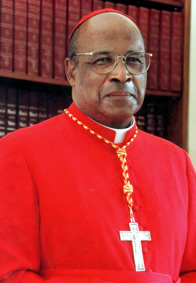 At which point I strapped on my willow-wood clogs and pulled out the miniature windmills that are collecting dust in my desk drawer, throwing my temporary support behind the Dutch.  That's not entirely true.  First, I cooked up a big 'ol plate of sauerkraut and brätwurst to munch on while cheering for Germany in Saturday's win over Uruguay. But I digress... Spain triumphed, and I'm happy for them.  World Cup champions, a visit from the Pope in November, World Youth Day next year -- it's great for Spanish Catholic soccer, sorry, football fans! I was also happy to hear about the effect that the World Cup has had on South Africa, and all of Africa. The Archbishop of Durban, Cardinal Wilfrid Fox Napier tells Vatican Radio that the World Cup has made Africans feel part of the global community. Cardinal Napier says to have the World Cup in South Africa is significant “for feeling connected” and for “being recognized by the international community.” “Now,” he says “the most important thing that must happen will be believing in ourselves, to see that we can do important things without expecting that it will be others doing it for us.” The Cardinal also says the World Cup did a lot for unity and solidarity among the countries in Africa, much more than could have been done by words from politicians. Listen to Vatican Radio's full interview with Cardinal Napier HERE.